This is the third and final part of our guest writer series, by Dr. F. Scott Spencer, And the WORD “Felt” Among Us.

This series relates to Spencer’s excellent new book, THE PASSIONS OF THE CHRIST: JESUS’ EMOTIONAL LIFE. 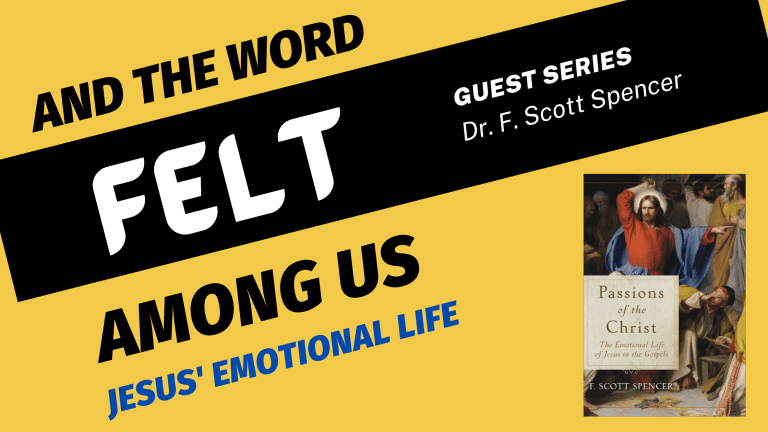 It’s fine to say we should focus on Jesus’s emotions. But how do we do that responsibly? We certainly must guard against imposing our heightened psychological imaginations on the much less introspective Gospels. We must hew closely to the Gospel texts, which scarcely ooze sappy sentiment, but still reveal significant emotions of Jesus—more than scholars have typically acknowledged. Even so, how do we “translate” emotions from a different culture long ago and far away? It can be hard enough to “read” the complex emotions of a partner or friend, and anyone who’s traveled abroad knows that American ebullience, for example, does not always mesh well with British reserve or Asian courtesy.

With respect to interpreting Jesus’s emotions, it’s not simply a matter of matching an ancient Greek word with a modern English one. Orgē is “anger, wrath”; lypē is “grief, anguish.” But while words can generate emotions, word labels for emotions do not really define—still less, confine—them. Expressed emotions erupt in multifarious actions and effects: they make a scene!

The simple statement, “Jesus wept” (John 11:35), set near a beloved friend’s gravesite, may seem clear enough. But this is text, not film. We do not see facial expressions or hear vocal intonations so critical to “reading” emotions. And as funeral customs vary widely within contemporary cultures, how much more the potential differences between our time and Jesus’s? Across most cultures, people shed tears, but they don’t necessarily “mean” and “feel” the same. Likewise, loss commonly ignites volatile shots of anger within the maelstrom of grief. Jesus appears to let out a fuming “snort” amid his tears (John 11:33, 38)—but why, and to what end? And the wafting noxious odor of a four-day old corpse likely crinkled Jesus’s nose, as it would most people’s, and sparked visceral feelings of disgust. But again, what might disgust mean for Jesus in John’s scene, especially in light of Jesus’s goal to resuscitate (refresh) Lazarus’s stinking body?

As always in biblical interpretation: context rules. I regularly told my students that if I called them at 3:00 in the morning, I expected them to answer with the mantra: “Context, Context, Context!”  Emotions emerge and evolve in dynamic contexts: narrative worlds, social networks, cultural environments. Immersing ourselves as much as possible in these contexts gives us a reasonable chance to read Jesus’s emotions rightly.

The Jesus of the Gospels wore no PPE gear and did not float about in some sterile bubble. He dwelt and felt among us, as one of us. To miss the emotional dimension of Jesus’s life—integrally affecting his whole divine-human being—is to miss the “fullness” of Christ “we have all received, grace upon grace” (John 1:16).

The 2021 SBC and the Cost...
Anxious Bench
Related posts from Crux Sola: Formed by Scripture to Live like Christ

Evangelical
GUEST SERIES: "And the Word 'Felt' Among Us"...
Crux Sola: Formed by Scripture to Live like Christ