My Students Challenged My Lecture…And I Listened: The Story Behind An Academic Article

For over fifteen years, I have been teaching the theological concept of cruciformity—the notion that the cross of Christ is not just a place or event, but a pattern and formational disposition for believers to emulate. Cruciformity is about the disregard of status and laying down of power—just as Christ did—to be a force for good in the world. Cruciformity is about sacrifice, humility, and service. Year after year, this was a core lecture in my courses on Pauline theology. Time and time again, students have told me that that lecture was their favorite lecture. That once they learned a cruciform theology, they saw it everywhere in Scripture. And now it guides their life as it has guided mine. My “cruciformity” lecture was a guaranteed hit…until 2021.

I was teaching a fall 2021 course on Pauline theology and ethics and we got to the place in the term where I would naturally teach about cruciformity. Some of my students resonated with it and nodded with appreciation and approval. But others were clearly troubled. One or two of them spoke up: if cruciformity is about sacrifice, relinquishment of power, and humility—what about those people who have nothing? What about the marginalized who are constantly being robbed of power? What about the abused—are they expected to serve the abuser? It seems like cruciformity is good formational instruction for the powerful, but what about the people pushed to the bottom? Can cruciformity be harmful? Does it further reinforce unequal power? Does it obstruct the pursuit of justice?

I was….stunned. I didn’t know what to say. This was the construct I used for Christian theology, and these were great questions. Valid, thoughtful, and exactly the conversations that seminary is meant to encourage.

So, I told my students to pause while I sought wisdom from some colleagues. We would take a week and resume the conversation after I had time to process. I immediately emailed trusted friends: Mike Gorman, Dennis Edwards, Rebekah Eklund, and Tim Gombis—all people who have appreciated the concept of cruciformity (largely associated with Gorman’s scholarship), and who also care about people who live on the margins. Each individually offered me some insight and they said much the same thing: cruciformity is not just and not always about giving power up. Furthermore, it ought not to be an individualistic or isolated experience. It takes a cruciform church to protect each individual and seek the welfare of all. Edwards helped me process the term “humility”: biblical humility is not giving people license to walk all over you.

I came back the next week, shared some insights from my colleagues, and invited students to share some of their own perspectives. My students challenged me to think through a case study: so I chose the first century slave Onesimus. Philemon scholarship talks about the silencing and invisibility of Onesimus in Paul’s letter to Philemon. We don’t pay him much mind. But what would it have looked like for Paul to call BOTH Philemon AND Onesimus to apply cruciform spirituality to their reconciliation efforts? What I learned from my students and my colleagues is that while both are called to Christlikeness, they might not be called to the same actions and virtues in that situation. For Philemon, he must come in humility and charity; for Onesimus, cruciformity might look like courage, forthrightness, and maybe calling Philemon out on a few things.

Now, instead of thinking of cruciformity as a formula, I think of it more as a many-sided prism. The core of cruciformity is obedience to God and love of neighbor. Setting aside self-centered ambition and conceit, bitterness and hatred, revenge and superiority. But I am careful not to define cruciformity as the giving up of power or the dismissal of status.

It was hard for me, at first, to be questioned by my students. It made me feel stupid and ineffective as a teacher. But I have come out of the experience having learned and grown. There are very few things more satisfying than having your students lead you to a deeper understanding. I wish this happened more—I just need to learn to get out of the way.

If you are interested in reading my article, it has been published in Expository Times under the title: “Cruciform Onesimus? Considering How a Slave Would Respond to Paul’s Call for a Cross-Shaped Lifestyle” ExpTim Feb 24, 2022. (REQUIRES SUBSCRIPTION, check with your institution on access)

Thank you to Professor Paul Foster for publishing this article, and his team for getting in print very quickly. 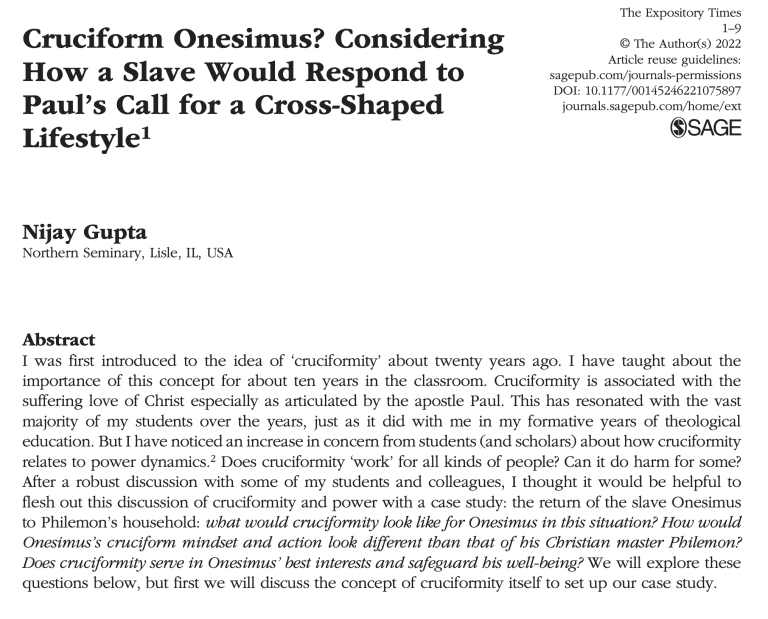 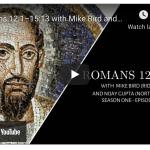 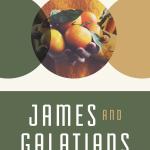 March 2, 2022 Scot McKnight's New "Everyday Bible Study" Series (Interview)
Recent Comments
0 | Leave a Comment
"How did you make your Accordance software look so sleek with that darker color? It ..."
Jen Why I Use Accordance Bible Software ..."
"According to Frankl and Ten Boon, perspective is everything. Logotherapy is part of existential and ..."
the old scribe My Students Challenged My Lecture…And I ..."
"I agree with your insight into the secular nature of the students’ questions. I think ..."
jeff q My Students Challenged My Lecture…And I ..."
"I devoured it in just a few days"
Nijay Gupta Interview with Dr. Luke Timothy Johnson ..."
Browse Our Archives
Related posts from Crux Sola: Formed by Scripture to Live like Christ