Guest Post: Why I Believe It’s Time For ALL of Us To Start Working With Ancestors

Guest Post: Why I Believe It’s Time For ALL of Us To Start Working With Ancestors May 16, 2012 Crystal Blanton 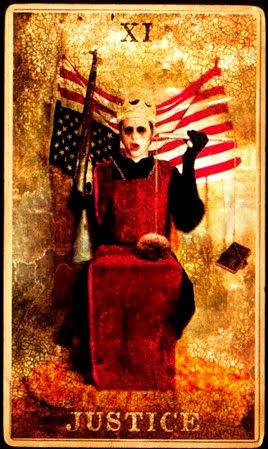 Greetings. I have been working on this essay/blog for several months.I wanted to wait until the anger subsided, and if I waited for that I would never get this piece written! Once again I received not only inspiration, but also strength from Crystal Blanton, who I’ve only recently gotten to know from working with her on her anthology “Shades of Faith: Minority Voices in Paganism” where I contributed a poem.

I was originally going to entitle this piece, “Why I Believe It’s Time for My White Brothers and Sister to start working with Their Ancestors,” and I realized it wasn’t just White people who needed that juju!

I first got the message that we needed to work with Ancestors as community magik after 911. I was a member of a community whose Elders put a call out on the morning of 911 for those of us who felt lost, alone, and disempowered to come together to do some magic.We met and tranced down to talk and help guide some of the dead across. This proved to be a very powerful and very draining process.The message I got after “coming back” was it was time to start working magic in union with the Allies who had been waiting for our “awakening” to work with us. This included the Fey, the Ancestors and the Deities we all worked with.

I had already started doing Ancestors work on my own. Of course each tradition has their own way of working with the Ancestors, and in my family if you are open they just tap you on the shoulder and say, “What took you so long?” literally! I had been going through a very heated custody battle with my ex husband. I felt beaten down, and alone. I was lying in bed one night unable to sleep, and just sat up, grounded and just started talking to Spirit. I broke down and started crying saying I felt weak, helpless, alone and broken. I knew there was strength in my blood line and that the women in it didn’t give up, we always found a way to make it through the worst of times. I asked someone to come to me to remind me of the strength in the blood that ran through my veins. I asked that they come to me to remind me that I was their daughter! By this time the tears where flowing and the passion and the need was deep! All of a sudden I felt someone sit on my bed. I need to point out at the time I was totally alone in the house and the bedroom was pitch black. I took in my breath and didn’t move a muscle. I felt something grab my foot and give it a gentle put firm squeeze! I closed my eyes and willed my heart not to jump out of my chest! I thank the Spirit that came to me, and I politely ask the Spirit to give me a moment or two to take in this amazing and powerful manifestation! I felt the Spirit leave and realized once again….Magik is real!!! A few weeks later my mother gave me a ring that she had come across as she was cleaning up. It was a ring that had belong to my Great, Great, Grandmother Celina St. John. The ring was gold with the middle initial of C, and as “magik” would have it my birth name is Clothilda so the initial matched. The ring also has a leopard motif with claw marks, Pantera/Panther, which is my magikal name.The significance of this would come later.

Celina was a Vodun Priestess in Louisiana. Now I’m not sure if she would have referred to herself as such, but she was the one that people came to for herbs/healing bath salts etc. She was also the “protector” of the family, and heaven help those who caused harm to her “people.” Through working with Celina I learned about magik, deep magik. I learned how to call in Spirit, how to manifest and make things happen with just thought.

As my magik became stronger, and more importantly as I became more comfortable with it, my dreams became more intense. I started to feel a sense of urgency.

A few of us who had been at witch camp that year upon returning to the “real world” started have apocalyptic/prophetic dreams, and two months later 911 happen.

One of the messages that has become a common thread for those of us who do “deep magik” is that the era of “play” is done. Now we need to heal and come together for the “times ahead.”

Now coming together and working for the transformation of all that we know; it should be easy right? Not so much! We have never been more fragmented as we are today. And this is actually a good thing! I believe we have been “faking it” for sometime. All of us! I think it’s very interesting as I write this we have: Mars, Saturn, and Pluto all retrograde. We are also waiting for what George Zimmerman will be charged with. The magikal community has been divided on the issue of gender, and the country on the issue of race. The poor are becoming the majority and the rich have convinced some of us that it’s our fault we’re poor. Women, Poor, and of course People of Color are under attack.

Have you ever watched rats in a barrel? Yes, I’m sure you’ve heard the term, but have you ever watch how they behave? I have. You see when rats are in a barrel and being poked by a stick until they bleed, they eventually stop attacking the stick and start attacking each other.Guess what y’all we are those rats in the barrel!

The thing about it is I’m not sure if I agree with some of the sentiments I’ve seen on line and in the news. I don’t believe the intense exposure of the Trayvon Martin case has “stirred up racial tension.” Point of information…my lovelies this country has never known a time free of racial tension since the first person of European descendant sent foot on this land! There is this feeling among White people if all the People of Color are quiet and not complaining everything is cool. Actually it just doesn’t manifest itself where it can be seen all that clearly.

High Blood Pressure among Blacks is the highest of all racial groups:43% among Men and 47% among Women. The next closes group was Mexican Americans 27.8% among Men and 28.7% among Women. When you are constantly having to swallow your anger, frustration, shame, and all the while trying not to offend people it builds up inside of you and eventually eats away at your very soul and kills you.! Blacks once again have a high rate of death in regarding to heart disease with 24.4% and they are not the highest group to fall prey to this problem, that honor is saved for Whites which have a 25% statistic! These statistics are from the CDC (Center for Disease Control and Prevention). So, it looks like White folks suffer too! It’s hard “pretending” not to see the pain, anguish, suffering, and yes hatred from another group directed towards you and not take it personally, consciously or not.

So here we are. Two groups who have so much to lost if they don’t come together and who deep down in their DNA don’t truly trust each other. Now I’m not going to get into the history of that. There are books, websites; hell even friends can fill you in on “our joined history.” Let’s put it this way, we have a hell of a way to go, and not much time to do it! Hence, where the Ancestors come in. First off as mentioned earlier we got a lot going on energetically. Things are moving and coming up. We need to look deep inside ourselves, I’m talking “shadow work” here, and really be honest with ourselves, our true feelings, and where those thoughts, feelings and believes come from. What do we really believe to be true, and what do we not question because it would stir the cauldron of our essence, our core of what we have been conditioned to accept?

While reconnected with my family in Louisiana I found out some deep and disturbing things. The core of it lies in the work that I have taken on, and my own healing. Let’s just say there is a history of abuse that runs long and deep in my family tree. My Guides told me that it is up to me to work and heal the cancer on my tree. Remember that ring: Birth name combined with Magikal name? Spirit told me that the work I do on this plane, in this generation would reverberate back to heal the roots all they way to those who made it across the middle passage and became slaves in a strange land.

I can not recall all the times I have heard from White Pagans….”Oh, I would never work or give reverence to my Ancestors. They were”…fill in the blank. Newsflash! Your Ancestors were not all:cattle thieves, rapists, slave traders/owners/overseers, etc. You had Ancestors who sold the herbs, who were the Wisewomen/Alchemists/Healers. WE are Witches/Shamans/Healers, and WE are the ones WE/THEY’ve been waiting for! All of our Ancestors are still in chains…yes even your white ones! They are stuck in their hate, fear, loathing and a lot of that has been turn inward which means you carry it in your DNA. Yes, my sisters and brothers you are not immune nor am I. I find myself at that place of deep anger, hatred and wanting to lash out, and because of my magik and my connection to those who have gone before me I can find compassion and patience. And that patience only goes so far! The time is now…start healing yourselves and then work out to heal your bloodline. Once you start you will find you’re not alone. Those Wisewomen/Alchemists/Healers in your line will rise up to help you!

Would you take refuge under a tree with no roots in a windstorm? The “storm/winds of change” is coming and it’s are going to be massive!

We can do this…We will do this. The alternative is much more terrifying!!!

Blessings on all our healing of our family line and ourselves!

Reposted with permission from http://lunasmagik.blogspot.com/2012/04/why-i-believe-its-time-for-all-of-us-to.html

May 21, 2012 Sharing Space; An Honor It Was
Recent Comments
0 | Leave a Comment
Browse Our Archives
get the latest from
Pagan
Sign up for our newsletter
POPULAR AT PATHEOS Pagan
1

Rush Limbaugh is Dead and My...
John Beckett
Related posts from Daughters of Eve