Cultivating Paganism: The Beauty of Horticulture in Our Bubble

The art of horticulture is important to this piece, because it demonstrates the controlled, skilled and purposeful growth of cultivated crops for reasons of health and beauty. One of the best worded descriptions I found on the internet about the movement of horticulture was on Wikipedia, where it states:

Horticulturists apply the knowledge, skills, and technologies used to grow intensively produced plants for human food and non-food uses and for personal or social needs. Their work involves plant propagation and cultivation with the aim of improving plant growth, yields, quality, nutritional value, and resistance to insects, diseases, and environmental stresses. They work as gardeners, growers, therapists, designers, and technical advisers in the food and non-food sectors of horticulture.

I was reading these descriptions and thinking, “isn’t that exactly the beauty in Pagan community?”

We come together as a society of practitioners that are a minority religion within a larger societal, religious picture. We come together to apply “knowledge, skills, and technologies used to intensively produce” a product that supports our social and Pagan culture. It is the shared commonality of community that plants, breeds and cultivates infrastructure that is not brick and mortar, but instead is spiritual, cultural and social capital.

Let’s take a moment to define culture. In the article Whose Culture has Capital? A Critical Race Theory Discussion of Community Cultural Wealth, Yosso states (2002), “Culture refers to behaviors and values that are learned, shared and exhibited by a group of people. Culture is also evidenced in material and nonmaterial productions of a people. Culture as a set of characteristics is neither fixed nor static.” (Gomex-Quinoines, 1977)

What is social or cultural capital? And why is it important to acknowledge the importance of it here? Cultural capital is a theory that identifies the knowledge, skills and resources as capital within that community; social capital refers to the social networks and community resources.

Ultimately these theories acknowledge that what is important within one culture may not always be important within another. Often Critical Race Theory (CRT) and ideas of social or cultural capital are applied in social work discussions around the inequalities between certain groups of people, acknowledging that value is placed differently depending on the actual culture of the group. The skill of being bilingual in a Spanish-speaking home, is not going to be the same as within an African-American home. The skills of creating clothing from animal skins did not have the same value to the invading colonists as it did to the Natives that had been living on this land. The value of those skills did not translate from one culture to the other, and it is the same in many cultures today.

This is an important concept to this discussion because there is cultural capital in the Pagan community, and often it is not valued the same within the larger religious community. Effectively running a Pagan ceremony will not have the same value to larger society, even if it is a necessary skill among our own. Any community, especially a minority sect of larger society, will have beliefs, practices, vocabulary, skills, fashion, social understandings, and even customs that are full of wealth within that culture. It is the cultivation of community that happens around these concepts, the grooming of stories and associations that becomes a part of the importance of the structure of beliefs. Pagans are no different; we are very much the same as other minority religions, ethnic, or gender communities.

When I go into another person’s home, a person who happens to be from another ethnic group, I do not assume they practice the same customs in their cooking and eating as I have learned from my family. Thanksgiving in my home is compiled of collard greens, yams, turkey, ham, potato salad, thick gravy from scratch, mac and cheese, corn bread, banana pudding and pumpkin pie with strudel topping. This meal is of great importance to our family, and we are often critical of others whose turkey is too dry. Until the death of my mother, our turkey was smoked, giving it a flavor that we associate with great skill. Since her death, I have yet to learn this skill. I have gone to other’s Thanksgiving feasts before and our customs are strange to them. Greens? Potato salad instead of mashed potatoes? No traditional pumpkin pie or cranberry sauce? The differences in our cultures does not easily translate to the others.

In reality, this is understandable and it is ok. Critical Race Theory talks about systems and structures that should take cultural influences into consideration, such as academia. What if we could take that into account within and without the Pagan community? What if we were able to be comfortable with the sense of Pagan community as much-needed culture building, that creates community cultural and social capital? This space would be the place we go for support, understanding, shared spiritual experience, teaching, social activity, skill building, and service. And we wouldn’t have to feel like there is something in that process that does not have value. Where we cultivate culture, we have the chance to redefine who we are, and gain the tools to sustain that emotionally, intellectually and spiritually.

AND we get to also exist in the greater community. Just like with other cultures, we often will share what value sets might have capital in other communities and those things that translate. I don’t force Southern collard greens on my friends who are not interested, just like I don’t assume that the greater world wants to learn about circle casting. Now, I do know that some areas of metaphysical work have capital in both communities, and so those things might make sense to share. 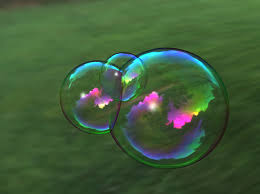 We exist in a collaboration of bouncing bubbles; all connected and yet distinctly different than one another at the same time. They often rub up against each other and join into one bubble before separating again to form individual ones.

I tend to think that I float in and out of bubbles that encompass my multi-faceted needs, fulfilling different areas of identity and connection for me. I have my Pagan bubble, my social work/counseling bubble, my family bubble and my greater society bubble. I also have my Black bubble and my woman bubble, too, but none of these bubbles confine me. Instead, they are interconnected links that individually hold strength and make my system able to withstand the pressure that comes with this here body, this here mind, this here heart, and in this here world and corner of society. My chain must remain strong to withstand the pressure it endures, and so I must cultivate each one to be a strong link. There is no weakest link in the chain.

And all day long I am still a Black woman, who is a social worker and a mother, who is also a Pagan in greater society. I am all of those things all at once, and I hold the individual cultures of them all — cultivated through time and preserved through acknowledgement of their capital. If we focus too much on a melting-pot theory of togetherness, we loose ourselves in the sameness. It is important that I remember that.

As farmers to our Pagan culture, we should remember the work and the wisdom put into the process of cultivation. We cannot plant in other people’s soils until we can grow in our own. When we apply CRT thinking to this process, it replaces a deficit model of thinking with one that is positive and full of life. 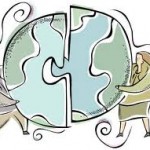 March 27, 2013
Stepping Out of the Broom Closet and Gliding Across Boundaries
Next Post

April 7, 2013 200 Words: Patheos Blogger Challenge by Porsha Williams
Recent Comments
0 | Leave a Comment
"LOVE this!!! I've been feeling the same way - curious about Hoodoo and it's roots ..."
DMDaniels Conjuring a Path: Embracing African-American Folk ..."
"I would think that spring tends to speed things up , and their is so ..."
Alma Mercer Missing in Internet Action
"A great story, thanks!To add some stuff: for a lot of people in the West ..."
Kirran Magic Out of the Land of ..."
"Peace and blessings to you my sister."
Toya Missing in Internet Action
Browse Our Archives
Related posts from Daughters of Eve