Black Lives Matter wanted one thing but it backfired horribly

From the moment they came on the scene, Black LIES Matter had one goal in mind: anarchy. No matter what they’ve tried to tell us, BLM isn’t interested in unity and they certainly aren’t working to build trust with police officers. They want a total takedown of law and order and they’ll use any means necessary to achieve that goal. However, their plans have backfired and even liberals are starting to take notice.

Instead of creating more dissonance between the American public and police, the latest polls show that respect for police has risen significantly despite Black LIES Matter’s best efforts.

It’s an unintended consequence even a leftist outlet like Vox has noted:

Over the past few years, Black Lives Matter activists have prompted an unprecedented level of media and political scrutiny on questions related to police misconduct…

Under the circumstances, many people may not be aware that 2016 was also a year in which Gallup found a huge surge in pro-police sentiment among the mass public.

BLM has certainly wreaked its fair share of havoc but their aggressive and violent “outreach” was rejected when we elected Donald Trump as the 45th president. Enough is enough. Black LIES Matter should change its slogan to, “This is how you get more Trump.”

A post at The American Interest makes the case that BLM has lost its footing as a legitimate Civil Rights organization because it deals in anger, not rationality:

Martin Luther King was sometimes an angry man, and with just cause, but we owe his lasting impact on American life to his wisdom rather than to his rage.

Unfortunately, the radical hate group responsible for burned cities and dead cops isn’t interested in solving the black community’s ills, but they will do whatever it takes to exploit them.

With the 2016 election over, even the Democrat Party threw Black LIES Matters overboard – the support for police has surged. Even Democrats realized slamming police was a loser with middle class white voters.

No longer needing their vote, Black LIES Matter has been kicked to the curb by liberals and replaced by refugees, white Women’s March on Washington and illegal aliens. Talk about not getting any respect. Black LIES Matter may go down S one of the shortest political movements in US history. Even the Occupy Movement lasted longer. 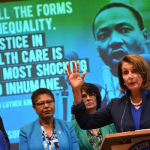 February 10, 2017
Democrats are the party of racism, and this bill proves it
Next Post 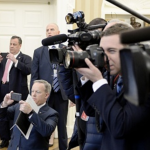