That’s how Kurt Schlichter’s powerful essay on TownHall.com begins, and it really resonates.  It continues, saying, “You are normal, and therefore a heretic. You refuse to bow to their idols, to subscribe to their twisted catechisms, to praise their false gods. This is unforgivable. You must burn.”

Yes, this is a strident, but it’s absolutely true.  If you don’t know this, you either are in denial or you aren’t paying attention.

U.C Berkeley taught us this.  The criminal activity at President Trump’s inauguration taught us this.  The so-called Women’s March, where they dressed up as genitalia taught us this. When I went to the inauguration, I saw there was the breakdown of a civil society.  People were throwing eggs, hitting others.  A liberal set a Trump supporter’s hair on fire. Don’t you dare call them protestors; they are criminals…  and they hate you.  They hate me.

That’s why you need to read the ending of Schlichter’s essay:

There’s no truce to be had, no possibility of a tie. And the frightening thing is that the Left is so foolish, so stuck in its bubble that it has no understanding that it can only push so far before the people with all the guns and all the training push back. That’s the problem with kids who were raised on participation trophies and who never got into a fistfight – they don’t consider the possibility that they will lose, and lose hard.

We must ensure they do. Understand your enemy. Understand that the Left will exploit your principles and morals to make you disarm yourself – figuratively and literally. Don’t play their game; don’t fall for their manufactured outrages. Never concede their lies, never take their side against the people defending your liberty. Most of all, accept the truth that if we let them win we will spend the rest of our lives on our backs with a giant Birkenstock pressed into our collective face.

They hate us. And however they come at us, we need to be prepared to fight.

As I said at the ball, I’m one of those bare-knuckle fighters.  When I hear people say we need to reach across the aisle and work with the Democrats, you know what I say? The only reason I’ll be reaching across the aisle is to grab one of them by the throat… before they slash mine.

It’s time to fight back using their tactics. We on the right have to be willing to use guerrilla warfare tactics.

My objective is to give people the courage to fight back. No more turning cheeks, taking the night road or developing a thick skin. I’m done with that shit.

Have you seen the book called The Starfish and the Spider: The Unstoppable Power of Leaderless Organizations?  It teaches this principle:

That’s what has happened to the Republican party, and we’re going to be stronger than ever.

Click continue to hear me talk about fighting back: 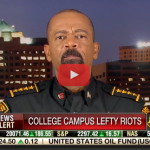 February 8, 2017
Sheriff Clarke: The final word on violent riots at universities
Next Post 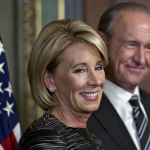 February 10, 2017 5 powerful ways Betsy DeVos will reform education in America
Recent Comments
3 Comments | Leave a Comment
"Maybe we should start tagging every article like this (innocents killed by blacks) #BLM to ..."
Praying4America Blacks can’t commit hate crimes against ..."
"The premise of this statement is ignorant and anyone who believes that blacks can't commit ..."
BrooklynSWAMI Blacks can’t commit hate crimes against ..."
"Thank you for this update, Sheriff ! I think Officer Corcoran was very alert and ..."
Larry Curtis 3 Words Would’ve Saved This Guy’s ..."
"yay!!!!!"
Teresina Brisciana ESPN finally admits targeting conservatives was ..."
Browse Our Archives
Follow Us!