Questions Not Answers: My Journey from Journalism to the Priesthood 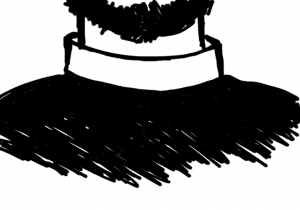 In college, I thought that by the time I was 32, I would be working at a large daily newspaper, not a month away from ordination in the Episcopal church.*

As a journalism student and a greenhorn reporter in Alabama and Northern California, I assumed I would spend the majority of my adult life in a newsroom. I thought that I would take all the late-night lessons from the college newspaper office that inexplicably smelled like old cabbage and apply them to late nights on deadlines in a daily newspaper office that smelled of stale coffee and cynicism.

Indeed, that is exactly what I did for several years, working with a couple of mid-sized newspapers in Northern California, as a reporter and later as a freelancer.

But I left that career behind to become a stay-at-home dad when my first son was born. Now, I am moving into my next career, a priest in the Episcopal church, and am learning that my training as a journalist has taught me one of the most valuable lesson for aspiring clergy.

In journalism, I learned to ask good questions, to not be afraid of questions and, most importantly, to not believe the easy answers. In retrospect, journalism might have been the best possible preparation for the priesthood.

Because at the heart of both journalism and the life of faith lie good questions without simple answers.

As a professional journalist, I learned to treat easy answers with a healthy sense of skepticism, and it has served me well as person of faith and as a minister. Questions are what people come to a minister with, and they are not questions that a verse of Scripture or a few minutes of prayer will answer.

In fact, I don’t think most people want their questions answered. They want them asked.

In many ways, though I asked my share of questions as a journalist, I also listened to just as many questions from people in their own times of darkness; whether it was the questions that followed a traumatic loss or a life-changing event, a major part of my time as a journalist was spent as a witness to confusion, doubt, questions and darkness.

As a priest in formation, my call is much the same. Except, instead of simply being a witness, I get to be a fellow sojourner into the valley that shadows death. I get to walk with people through darkness, sometimes as a light, sometimes simply as a presence, but rarely, if ever, as one who has the answers.

Instead, I walk as one who shares the burden of questions without answers.

Perhaps it is my training as a journalist or simply my experience as a person of faith, but answers make me uneasy.

Whether we are listening to a politician, a preacher or even a biblical text offer us easy answers to the complex issues of our lives, we all harbor, sometimes secretly, our doubts and questions that we are being given an impartial truth, an outright lie or a pie-in-the-sky fantasy.

But one thing I’ve learned in ministry to youth and in ministry to the sick and dying is that the questions are there, rippling beneath the surface. We all have them, and often, we are afraid of them, of where they might lead, or of what it might mean for the future of our faith lives.

I think we get it wrong, though. When we finally ask our questions, unvarnished, that’s when the work and journey of faith really begin. That’s when it gets interesting, when we give voice to the doubts and questions we suppress.

That’s when we become people of faith.

I just pray we have the courage and the faith to ask them.

*For those unfamiliar with the Episcopal church’s ordination process, I will be ordained to the transitional diaconate in June, and will be priested later.

April 15, 2013
Keeping Silence in Tragedy: In the Aftermath of Explosions
Next Post

May 16, 2013 The Divine Protest of Pentecost
Recent Comments
195 Comments | Leave a Comment
Browse Our Archives
Follow Us!

Christian: You Are Upset About the...
Unfundamentalist Christians
Related posts from Edges of Faith