Refugee Stories: “Whenever I look in my baby’s face, I think of home.”

The baby coos and smiles at the kitten that walks into the room. Her cherub face is full of innocence as she glances up at her mother. She squeezes the baby tight to her body. There is no fear in the little one’s eyes, only wonder. She has no idea what her mother went through to be at this point.

The mother, Sajaa is just 20 years old, but has already lived a lifetime of danger. She and her two sisters, Mariam, 27, and Doha, 23, sat on the couch and laughed like sisters do. Their heads wrapped in colorful scarves, they finished each other’s sentences. They are obviously close, a relationship nurtured by culture, but forged by experience. 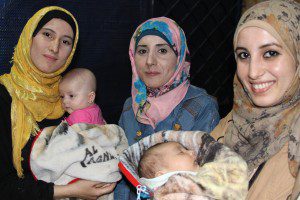 Just three years ago their life was settled and happy. They all lived in a large, 8-bedroom home that was meant for big families. Originally their grandfather’s, it was full of laughter and life derived from the agriculture lifestyle. Their village also bore their family name, Smaldi, a testament to the importance of the clan.

But the sleepy little town found itself stuck in the crossfire between the Syrian Army and the Free Syrian Army (FSA) rebel forces. As the fighting intensified, the family of 10 withdrew to a safe area.  A lobbed barrel bomb took out a corner of their house, destroying the structure — and their dreams. The Syrian Army would later surround the town, trapping the rebels who then scavenged the home for food and valuables.

The family walked, dodging government checkpoints and military hotspots. Getting to the Jordanian border carried great danger, as the Syrian Army reportedly shot people who were trying to escape. Working with the FSA rebels, the family entered Jordan through a safe zone. The Jordanian Army picked them up and took them to the sprawling Za’atari camp in Northern Jordan.

Inside the world’s largest refugee camp

The Za’atari camp is no KOA. With as many as 100,000 refugees, it’s a sprawling city of tents and hard-sided cargo trailers. Although it’s more than three years old, it was meant to be temporary, so the bathrooms, water collection and cooking all have inherent issues with shared access.

“We were frightened,” explained Mariam. “We often thought the danger in the camp was worse than the situation in Syria.” She described the extremes – Scorching heat and numbing cold — as if they just happened yesterday. They were in a tent and Doha described a particularly violent thunderstorm that had all them hiding under the blankets.

The family had to pay more than $400 to leave the camp, which they did after seven months, selling everything they had, including tents, bedding and clothing.

In the room describing this incredible journey was Doha’s husband, Wassam.  He was the first one to enter Jordan, avoiding the draft into the Syrian Army.

Ultimately, he was the one who helped the family escape the camp because of his passport status. “In Syria, they gave me two choices,” he said. “Kill others or die. So, I left.” He was studying economics at the University and was working as a sweeter, one of Syria’s famed pastry confectioners. He was detained at the border for five days until he was miraculously released.

A brother of the girls also avoided the draft and wasn’t so lucky. He’s currently serving time in a Syrian prison and has undergone so much torture his mental stability is now affected. The family sends money out of their meager account to him, as he must pay to use the bathroom, to shower, and to buy his own hygiene supplies.

I ask about their future. Like the other refugees, they are allowed temporary status in Jordan. They can live in the country, pay rent and buy groceries, but they cannot work. They can put money into the economy, but they cannot earn any. 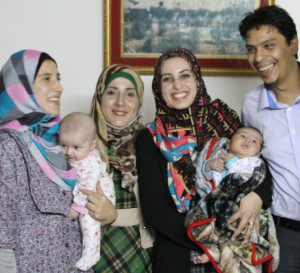 Relatives in the West are helping them and occasionally an odd job will come their way. They are waiting for immigration to some country, any country that will have them. Mariam wistfully looks away. “We miss Syria. We lost Syria. We want our country back.” Doha completes her sentence on a brighter note, “We have hope that tomorrow is better.”

So we never forget home

The family has been embraced by Christian aid workers in Jordan. While they have been met with discrimination and scorn by many others, these people have helped them find housing, clothing and heaters for the upcoming winter. “The Christians we have met are honest and are concerned for us. I prefer to work for them, too,” said Wasaam. “Our landlord is a Christian and he has been very helpful.

“I’ve been told that if you go to God and seek Him, you will find him,”Wasaam said. “Our family is seeking.”

His wife, Sajaa, lights up. “We will never give up. We have many problems, but as long as God is with us, we will keep laughing.”

Sajaa holds her four-month old baby closer to her face. She named the baby “Sham,” which is the historic Arab name for what is called Greater Syria. In English and French, the old name for that region is the Levant, which is where the letter ‘L’ comes from in ISIL.

“We named her that,” she said. “So we would never forget our home.” 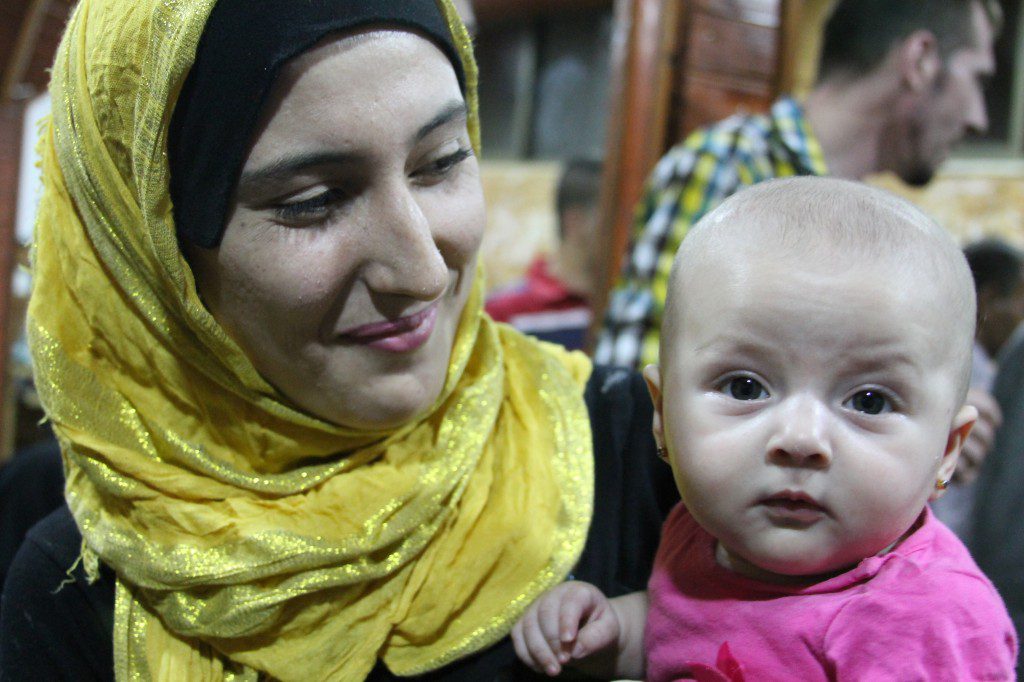