Forget the priest, deacon or rabbi: my friend will do the wedding

Forget the priest, deacon or rabbi: my friend will do the wedding March 10, 2012 Deacon Greg Kandra 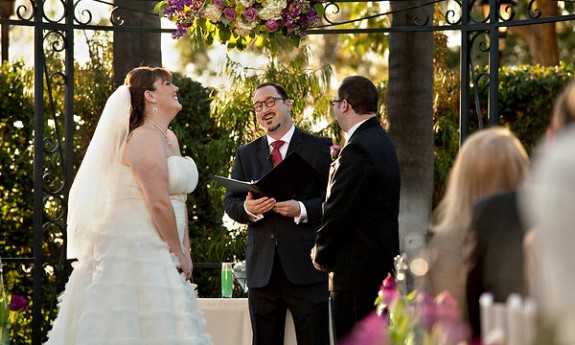 That seems to be the way things are going, with online ministry services providing more and more instant wedding officiants.

For generations, getting married meant solemnly standing before an authority figure charged with upholding the rules of civil society or religious traditions.

But when Amity Kitchen wed Matthew Saucedo in January, a gregarious family friend, Chris Coughlin, officiated. Mr. Coughlin’s credentials for performing the ceremony? He clicked his mouse at a site offering ordination as a Universal Life Church minister, joining the ranks of Web-blessed clergy who are becoming an increasingly popular choice to preside over weddings.

“Neither Matt nor I are very religious,” Ms. Kitchen said. “The thought of just randomly picking someone to perform this meaningful ceremony, that just didn’t make sense.”

Couples are turning to these nontraditional officiants for a mix of reasons: The ties that bind Americans to traditional religious institutions are eroding in many pockets of the country. Inter-ethnic marriages are on the rise. And many brides and bridegrooms want every aspect of their weddings to feel unique, not just the handmade centerpieces and couture cake.

“I myself got ordained, because what if an officiant doesn’t show up?” said Mindy Weiss, a high-end wedding planner in Beverly Hills, Calif. About a dozen of the 60 couples she worked with last year used a friend or family member ordained online to officiate.

Hard numbers on such weddings are difficult to come by because many counties and states do not record officiants’ religious affiliations. But places that do keep track have seen a jump. In Ohio, the number of people registering as Universal Life ministers to perform weddings has risen steadily, to nearly 1,600 in 2011, twice as many as registered in 2007.

In New York City, the City Clerk’s office processed 1,105 marriage licenses last year for ceremonies officiated by Universal Life ministers,  a small fraction of the total, but more than twice as many as in 2009.

In Massachusetts and Vermont, where almost anyone can become a temporary civil officiant, a growing share of couples have had their weddings presided over by friends or relatives with temporary permits. Last year, 13.5 percent of couples marrying in Vermont chose that route.

And nearly a third of the couples interviewed by the wedding Web site TheKnot.com, in studies of its members in 2009 and 2010, said they were married by friends or family members. Anja Winikka, the site’s editor, said the topic “wasn’t even on the radar enough” to include in the survey from 2008.

As couples marry later in life, Ms. Winikka said, they are less beholden to their parents’ notions of the ideal wedding. “Couples have established their own lives before they’ve tied the knot,” she said. “The wedding has become much more about them.”

March 10, 2012 Scholar known for "Death of God" dies
Recent Comments
0 | Leave a Comment
Browse Our Archives
get the latest from
Catholic
Sign up for our newsletter
POPULAR AT PATHEOS Catholic
1

Avoid Universalizing Private Devotions And Cultural Traditions
Sometimes, we get so used to our particular traditions of piety we...
view all Catholic blogs
What Are Your Thoughts?leave a comment