Memo to NBC: What the hell is wrong with you? 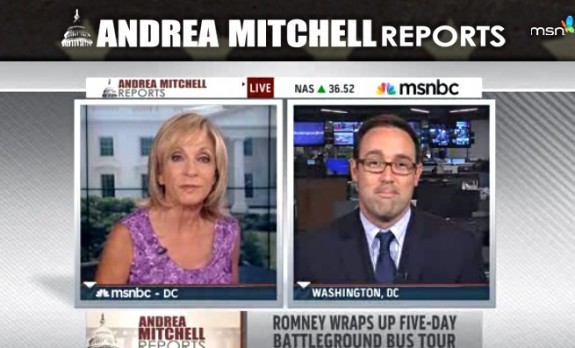 First, there was the Trayvon Martin boondoggle a few months ago.

Then yesterday, evidence of some creative editing regarding Mitt Romney’s visit to a Wawa in Pennsylvania.

Today, we have Andrea Mitchell’s spectacularly lame followup to “criticism of the Romney clip edit” — which amounted to Ms. Mitchell saying, with a sigh and a frown, “Oh, bother.  Fine.  Here’s what we left out.”   She failed to acknowledge what the “criticism” entailed; she neglected to point out how the editing misrepresented the event being covered; and she offered nothing resembling an apology or an admission of responsibility for something that was, as a matter of fact, irresponsible.

I’m tired.  Truly.  I’ve grown weary of trying to defend the indefensible and explain the inexplicable.  For years, people have stomped their feet and pounded their fists and snorted “Liberal media bias!” and I’ve always tut-tutted and shooshed them and said, “No, no.  Calm down.  They meant well.  It was just a misunderstanding.  A mistake.  These things happen.”  I spent over 25 years working in the oft-reviled Mainstream Media and I saw up close and personal how the sausage was made.   I knew the people who wielded the knives and wore the aprons, and could vouch (most of the time, anyway) for their good intentions.

Forget it. I’m done.  You deserve what they’re saying about you.  It’s earned.  You have worked long and hard to merit the suspicion, acrimony, mistrust and revulsion that the media-buying public increasingly heaps upon you.   You have successfully eroded any confidence, dispelled any trust, and driven your audience into the arms of the Internet and the blogosphere, where biases are affirmed and like-minded people can tell each other what they hold to be true, since nobody believes in objective reality any more.  You have done a superlative job of diminishing what was once a great profession and undermining one of the vital underpinnings of democracy, a free press.

I just have one question:

What the hell is wrong with you guys?