Muller and deacons: “Only a man can represent this relation of Christ with the Church”

Muller and deacons: “Only a man can represent this relation of Christ with the Church” July 2, 2012 Deacon Greg Kandra

The new head of the CDF, Gerhard Muller, has written extensively on the priesthood and diaconate, and gave an interview 10 years ago that shed light on his strong feelings about women and the diaconate:

Q: Is the diaconate a sacrament in its own right?

Müller: The Church teaches clearly that the sacrament of orders is one of the seven sacraments of the Church; as the full exercise in the Holy Spirit of the mission, unique in its origin, of the apostles of Christ, exercised in its fullness by the bishop. According to its degree of specificity, the differentiated participation in it is called presbyterate or diaconate. 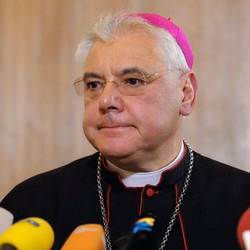 Q: Is it possible to separate the diaconate of women from the priesthood of women?

Müller: No — because of the unity of the sacrament of orders, which has been underlined in the deliberations of the Theological Commission; it cannot be measured with a different yardstick. Then it would be a real discrimination of woman if she is considered as apt for the diaconate, but not for the presbyterate or episcopacy.

However, the apostolic ministry all together is a service in the three degrees in which it is exercised.

The Church does not ordain women, not because they are lacking some spiritual gift or natural talent, but because — as in the sacrament of marriage — the sexual difference and of the relation between man and woman contains in itself a symbolism that presents and represents in itself a prior condition to express the salvific dimension of the relation of Christ and the Church.

If the deacon, with the bishop and presbyter, starting from the radical unity of the three degrees of the orders, acts from Christ, head and Spouse of the Church, in favor of the Church, it is obvious that only a man can represent this relation of Christ with the Church.

And in reverse, it is equally obvious that God could only take his human nature from a woman and, because of this, womankind has in the order of grace — because of the internal reference of nature and grace — an unmistakable, fundamental, and in no way merely accidental importance.

Q: Are there binding doctrinal declarations regarding the question of the feminine diaconate?

I am amazed at the lack of historical knowledge of some, and the absence of the meaning of faith; if it wasn´t like this, they would know that it has never been possible and never will be to place the Church, precisely, in the central ambit of her doctrine and liturgy, in contradiction with sacred Scripture and her own Tradition.

Q: What happens when a validly ordained bishop, outside the communion of the Church, ordains a woman as deaconess?

Q: Could the Pope say that in the future women will receive the diaconate?

Müller: Contrary to what many think, the Pope is not the owner of the Church or absolute sovereign of her doctrine. He is only entrusted with safeguarding Revelation and its authentic interpretation.

Keeping the Church´s faith in mind, which is expressed in its dogmatic and liturgical practice, it is all together impossible for the Pope to intervene in the substance of the sacraments, to which the question of the legitimate receiving subject of the sacrament of orders essentially belongs.

Q: Are women completely excluded from participation in ecclesial services? Is there no place for women in the Church?

Müller: If we leave to one side a clerical reduction of the Church, the question is no longer asked in this way. In her vital processes and in her service to man, the Church is the essential co-responsibility of all Christians, specifically also of the laity.

In many countries at present we cannot complain of an excess of active apostolate of the laity. Let us think of the dramatic withdrawal of women´s orders and religious communities, without which the Church would never have taken root in the different nations and cultures.

In the specific ministries of canon and human law, to which the laity can also be called to collaborate together with the hierarchy, namely the bishop, presbyter and deacon, women carry out important services for the Church, which are also satisfying to themselves from the human and spiritual point of view.

UPDATE: His book on the priesthood and the diaconate is available online via Google right here.

July 2, 2012 Pope as Trump: He tells Slovak bishop, "You're fired"
Browse Our Archives
get the latest from
Catholic
Sign up for our newsletter
POPULAR AT PATHEOS Catholic
1