The unique ministry of deaf Catholics 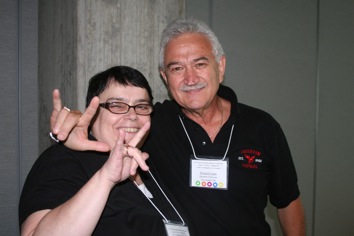 Details from the B.C. Catholic in Vancouver:

That’s the message Archbishop Terrence Prendergast gave delegates at the 11th National Conference of the Canadian Section of the International Catholic Deaf Association (ICDA) in Ottawa July 9-14. He gave his massage at a special Mass where most of the participants responded in sign language and hymns were sung with hands.

A ccording to ICDA Canadian Section’s general chairperson Richard Csabi deaf Catholics have built a loving fellowship that is poised to reach out to deaf Canadians who have either fallen away from the Catholic Church or who have never heard the Gospel.

“There is a joy in being Catholic, and being part of a vibrant community,” said Csabi, through Carol Stokes, the coordinator for deaf ministries for the Toronto Archdiocese.

The theme of this year’s conference was “Love your neighbor as yourself,” and its workshops, business meetings, social and sightseeing events encouraged that, said Csabi.

Stokes, who has been working with deaf Catholics since 1970, says there are large numbers in the Toronto area as well, beyond the 2,000 her office serves. But the ICDA needs to get the word out that they exist. “We need more advertising for ourselves,” Csabi said.

For many years, the hearing said the deaf “can’t, can’t, can’t,” said Csabi. “But we can do this. We can be deacons, priests, lectors and Eucharistic ministers.”

But whether Catholic or not, deaf people find a unity and sense of community that crosses cultural and language boundaries.

Deaf culture is very strong, he said. “It’s a unity, a connection. We’re sensitive to each other.”

July 25, 2012 From Magnificat: a beautiful meditation by Jean Vanier on service
Browse Our Archives
get the latest from
Catholic
Sign up for our newsletter
POPULAR AT PATHEOS Catholic
1