Closed abbey searching for another religious group to take it over 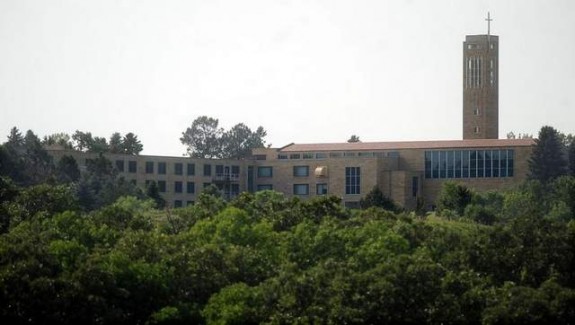 You’ll remember that the Blue Cloud Abbey closed its doors last summer. Now, the search is on for another religious group or community to take it over.

Caretakers at Blue Cloud Abbey, the Benedictine monastery overlooking the Whetstone Valley in northeast South Dakota, are looking for another religious order to occupy their vacant premises.

The 62-year-old abbey closed its doors in August, three months after its 14 monks decided that their declining numbers and aging membership made going on unrealistic.

In November, most of the items in its American Indian Culture Research Center — including the 4,000 books and 40,000 photographs capturing tribal life and history in the area — were delivered to the Center for Western Studies in Sioux Falls.

Now Abbot Denis Quinkert, the spiritual leader at Blue Cloud and one of three monks still residing there, is hoping another religious order might want to take it over.

“We’re looking at it, the property, being for religious purposes,” Quinkert said. “We would like another religious community to come and take it over. We’re not opening it up to the general public for sale.”

The search has been going on in earnest for about a month. There has been one inquiry, though Quinkert said “I don’t feel too confident with that one.”

“People aren’t beating down our doors to buy,” he said. “We’re waiting to see if anyone is interested. It’s kind of a limited field.”

January 19, 2013 Snapshot: how Ohio is coping with priest shortage, changing demographics
Browse Our Archives
Related posts from The Deacon's Bench