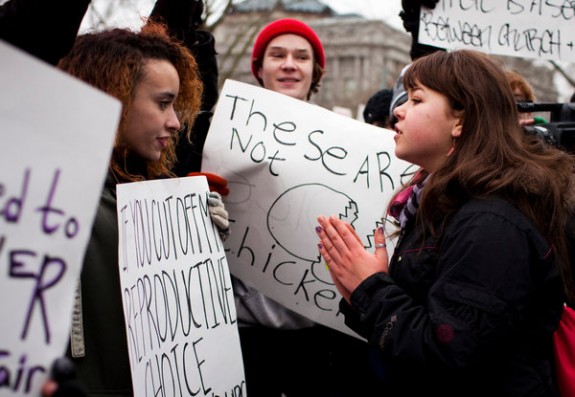 A one-time giant in journalism gets caught with its pants down.  It’s not pretty.

From Get Religion’s Mollie Hemingway, who did a little digging into a prominent sidebar the Times ran on the March for Life.  The sidebar focused on a letter sent by 60 presumably prominent Catholics, “saying that if marchers and politicians truly want to defend life they should support “common-sense reforms to address the epidemic of gun violence in our nation.”  Mollie found a few surprises:

Believe it or not, this is basically just a press release from the same savvy, highly funded PR firm that has been rolling reporters for the last year. One is beginning to think they enjoy the ride.

The group that put out the letter is … drum roll please …

… Faith in Public Life. Yes, that Faith in Public Life! They’re the ones who came up with the highly successful “Nuns on the Bus” tour that got embarrassingly uncritical coverage for an anti-Paul Ryan campaign featuring not one, not two, but as many asthree to four nuns. We’re talking front-page coverage in major media outlets, gushy broadcasts, the works.

You couldn’t pay for coverage this nice. Except, I guess, that George Soros and his fellow donors do pay for this coverage. But you know what I mean.

And yes, this is the same group that, well, despite being the brains and brawn behind the Nuns on the Bus group is also the group that successfully sold reporters the old “these scary Catholic bishops are way too partisan and political (but only when they happen to talk about something in opposition to our favorite political party and leader because if they agree with us we’ll praise them to high heaven)” PR campaign. That they ran both of these campaign simultaneously is sort of a testament to their chutzpah ad skill but much more a blistering and depressing commentary on the state of journalism today…

…Seriously. Couldn’t have worked better. Here’s the press release from Faith in Public Life. Here’s the New York Times story. If you squint, you might not even be able to tell the difference.

And please, New York Times: at least put on some underwear.

January 28, 2013
Making all things new: how a Manhattan church was saved
Next Post

January 28, 2013 Where have all the children gone?
Browse Our Archives
get the latest from
Catholic
Sign up for our newsletter
POPULAR AT PATHEOS Catholic
1