The question of Governor Cuomo and excommunication 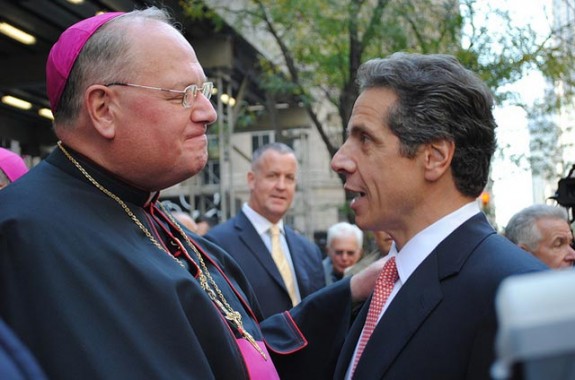 In the wake of Governor Andrew Cuomo’s radical proposals on reproductive health—which I preached about here—some people have started to say: “Enough.”  A few are even calling for his formal excommunication:

The governor and his legislative lemmings just passed a draconian gun control bill designed to protect the children of New York. Almost in the same breath, the same governor, wants to enact legislation that will kill more children every day in the state of New York than were killed at Sandy Hook Elementary School in Newtown, Connecticut.

Where is the priest of his parish? Where is the Bishop of his diocese? This man should be excommunicated from the church. The Church is complicit in the guilt of this man and other Church members who will vote with him on this bloody law.

Personally, I can’t remember the last time a prominent American was formally excommunicated from the Catholic Church — with the notable exceptions of Ray Bourgeois and Sister Margaret McBride, who were religious figures, not secular. (Sister McBride later reconciled with the Church.)  To the best of my knowledge, a Roman Catholic political figure — Senator, Governor, Congressman — has never been formally and publicly excommunicated for advocating laws in support of abortion.  (If you’re curious, you can find a list of some significant excommunications here.)  And, it turns out, the issue of excommunication and abortion is more complicated than most people realize.

I’m not a canon lawyer, so let’s hear from someone who is, Ed Peters:

IgnatiusInsight.com: Some Catholics wish that Catholic politicians who support abortion would be excommunicated immediately. Other Catholics think that excommunication of such politicians would be an attack on their individual consciences. Can you shed some light on the matter?

Peters: To those wanting the immediate excommunication of pro-abortion politicians, I have to say that canon law simply does not read that way. To make a long story short, an excommunication for abortion has to be linked to a specific abortion and, given the structure of American government and medical institutions, one simply can’t link a given legislator’s vote with a specific abortion within the limits of causality recognized by canon law. Now, I like to think that the words of law generally mean what they say. If we distort the words of penal canon law to the degree necessary to make legislators fall within the present terms of the abortion canon, we would do violence to the text of the law, and that’s always bad; distortions in law tend to come back and haunt us in other contexts.

Of course, maybe it’s time to redraft the canon law in this area, precisely to help the Church deal more directly with the grave scandal and harm being caused by pro-abortion Catholic politicians; but the law itself would need to be changed. I’m certainly open to that, but as I’ve said, the rule of law means that such changes must come about in accord with the law.

In the meantime, though, as I have also pointed out many times, there are most certainly immediate actions that the Church can take against pro-abortion politicians, and I’m happy to say that some bishops are doing that. I have in mind here, for example, the withholding of the Eucharist under Canon 915 from those whose conduct in government office is objectively gravely evil. Elsewhere, I have argued that Canon 1369 gives us canonical leverage against those who use their public office to spread contempt for the gift of life. I look at several of these options in the book, and people can also go my website, www.canonlaw.info.

There’s much more on some of the nuances of excommunication—what it means and what it doesn’t—over at the Ignatius Insight link.

What about latae sententiae excommunication—or one that is applied automatically?  I found some useful information at this link.  A snip:

For example, On February 6, 2007, Salzburg Zuxiliary Bishop Andreas Laun cased a stir in the German press by stating that a Catholic busienssman who rented space in this shopping mall to an abortion clinic has excommunicated himself. During an interview, Bishop Laun stated, “Because (the person) cooperates in abortions, by letting them happen in his shopping mall, the norm applies to him and he is excommunicated.”

The Bishop did not say that he was excommunicating the person. He was confirming that the person had automatically excommunicated himself by his actions.

This form of excommunication is also highly nuanced and complex. Check the link for more.

January 21, 2013 I'll drink to that: new pubs pledge profits to charity
Browse Our Archives
get the latest from
Catholic
Sign up for our newsletter
POPULAR AT PATHEOS Catholic
1

The Serpent In The Garden And Theosis
Those who engage evil present themselves as good. They embrace elements of...
view all Catholic blogs
Copyright 2008-2021, Patheos. All rights reserved.