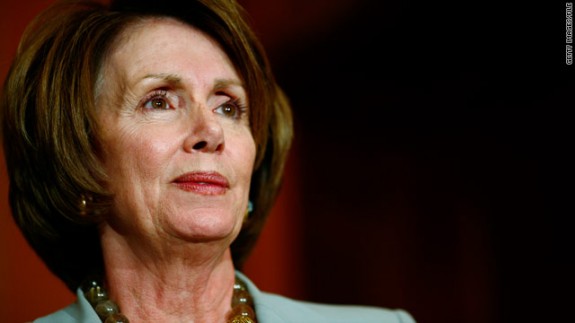 House Minority Leader Nancy Pelosi today bickered with a conservative reporter who asked her to explain the moral difference between live-birth murder and abortions executed during the final four months of pregnancy.

Pelosi began her news conference today by criticizing a Republican-sponsored bill to ban all abortions after 20 weeks without exception. The bill, H.R. 1797, the “Pain Capable Unborn Child Protection Act,” passed out of the House Judiciary committee Wednesday behind GOP support.

Today, Pelosi rejected the committee’s display as “really just another day in the life of the Republican Congress.”

“They passed legislation that was disrespectful to the rights, health and safety of American women,” Pelosi, D-Calif., said. “All the people who voted for the bill were men. Disrespectful.”

When she opened the newser up to questions, John McCormack, a reporter with the Weekly Standard, challenged Pelosi to explain the moral difference between murdering a live-born fetus, exemplified by the horrors of a recently convicted Philadelphia doctor, Kermit Gosnell, and fetuses aborted in the womb during the final four months of a pregnancy.

“O.K. You’re probably enjoying that question a lot. I can see you savoring it,” Pelosi said, in scathing tones, prompting a chorus of laughter from some members of the Congressional press corps. “Let me just tell you this. What was done in Philadelphia was reprehensible, and everybody condemned it. For them to decide to disrespect a judgment a woman makes about her reproductive health is reprehensible.”

Pelosi then tried to move on, asking reporters for the “next question.”

But McCormack jumped in and continued pressing Pelosi to explain the moral difference “between 26 weeks, selective abortion, and the killing of that same infant born alive.”

Gosnell was accused of performing late-term abortions on four babies who were born alive, but he then allegedly killed. He was convicted last month on three counts of first-degree murder.

Still, the reporter did not relent and repeatedly asked Pelosi to address the heart of his question, but she was having none of it.

“I’m not going to have this conversation with you because you obviously have an agenda,” she said. “You’re not interested in having an answer, but I’ve responded to you to the extent that I’m going to respond to you.”

“I want to tell you something. As a mother of five children — my oldest child is six years old the day I brought my fifth child home from the hospital — as a practicing and respectful Catholic, this is sacred ground to me when we talk about this,” she continued. “I don’t think it should have anything to do with politics and that’s where you’re taking it, and I’m not going there.”

June 14, 2013 Ordination Update: 8 New Deacons for New York
Browse Our Archives
get the latest from
Catholic
Sign up for our newsletter
POPULAR AT PATHEOS Catholic
1

Of Course Prenatal Learning is Real
Melanie Jean Juneau has a provocative story over at Catholic Stand about...
view all Catholic blogs
Copyright 2008-2021, Patheos. All rights reserved.