A remarkable example of the power of social media:

When the Rev. Thomas Vander Woude learned about a young couple planning to abort their unborn baby that had been diagnosed with Down syndrome, the priest reached out and offered a deal: Deliver the child and he would help find an appropriate adoptive family. 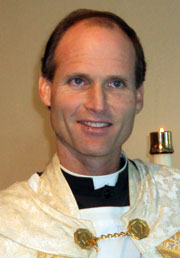 But he had to act fast.

The woman, who has not been identified for her privacy and her protection, was just shy of six months pregnant and lives in a state that prohibits abortions past 24 weeks — which meant he had a short time to find a family willing to make a lifelong commitment.

“There is a couple in another state who have contacted an adoption agency looking for a family to adopt their Down Syndrome unborn baby. If a couple has not been found by today they plan to abort the baby. If you are interested in adopting this baby please contact Fr. VW IMMEDIATELY,” the post read. “We are asking all to pray for this baby and the wisdom that this couple realize the importance of human life and do not abort this beautiful gift from God.”

The post asked people to call the church’s office after 9:30 a.m. Monday or to email Father Vander Woude.

No one expected the response they received.

“When we got in and opened up around 9:30, it was nearly nonstop. All day long, we were receiving phone calls from people who wanted to adopt the baby,” church staff member Martha Drennan said. “Father Vander Woude has gotten over 900 emails in regard to the baby.”

The offers were narrowed to three families, which the unborn child’s parents are reviewing with the help of an adoption agency.

Ms. Drennan said the church received phone calls from all over the United States and around the world, including from England, Puerto Rico and the Netherlands.

July 10, 2013 "This Man Who Had Given Everything He Had to Others Had One Last Lesson to Give..."
Browse Our Archives
Related posts from The Deacon's Bench

Spiritual Desolation
One of the most common traits shared by the saints and by...
view all Catholic blogs
Copyright 2008-2021, Patheos. All rights reserved.
Close Ad