“This Man Who Had Given Everything He Had to Others Had One Last Lesson to Give…” July 10, 2013 Deacon Greg Kandra

My blog neighbor Tom McDonald has just lost his father after a long illness, and writes powerfully and poignantly of a life lost and lessons learned:

He wasn’t suffering, mind you. Hospice does wonders in that regard, and morphine is a beautiful thing. He just was in that shadowy land between life and death. Everyone had gathered, and left. Everyone had said goodbye. We’d had our moments of grace and our lovely farewells. It was down to just my mother and me, night after night, praying for his release. And now I finally think I understand it. 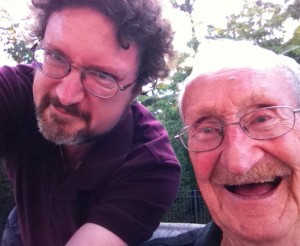 He was, at the end, as he was in the beginning: like an infant. And, like infant, he was cared for with the kind of gentleness a mother gives to helpless newborn. The nurses of hospice treated his body with dignity, even when his mind could no longer function, putting lie to the notion that only our brains matter. All of them had stories to tell about their experiences, and none of them was without faith. Each had seen things in their work with the dying that made a lack of faith utterly impossible. You may not be able to say “there are no atheists in foxholes” any more, but I can tell you there are damn few in hospice nursing.

They did all this because it was their job and they were paid to do it, but they did it with a tenderness and compassion that went beyond that: that indicated people with a calling. I helped when and how I could, but they were like a kind of priesthood of care, and they were better when left to do their work the way they knew best.

Curled up in a bed hemmed in by rails like a crib, he was left to their mercies, and mercy he received. They gently washed his body, lotioned his cracked skin, put dressings on his sores, gave him medicine, changed his diapers and his shirt, brushed his hair, and talked to him. They’d moisten his lips with swabs like foam lollipops, and once in a while, to my surprise, he’d move his mouth automatically to suck the water from them.

“Sucking is the first thing we do in life,” a nurse explained, “and it’s the last thing to go.”

And that’s when I began to get it just a bit, maybe. “Dust you are and to dust you shall return.” We end back and the beginning. My father had lived long and been strong, growing from a helpless child into a soldier, husband, father, builder, and Christian. This man who had given everything he had to others had one last lesson to give: we are not in charge. God comes in His Own time, and in His Own way.

It’s a beautiful tribute to a remarkable man.  Read it all.  And pray for him, that he might pray for us.

July 10, 2013 One Man Argues Against Restricting Abortion: "Casual Sex Will Become More Difficult to Come By"
Browse Our Archives
get the latest from
Catholic
Sign up for our newsletter
POPULAR AT PATHEOS Catholic
1