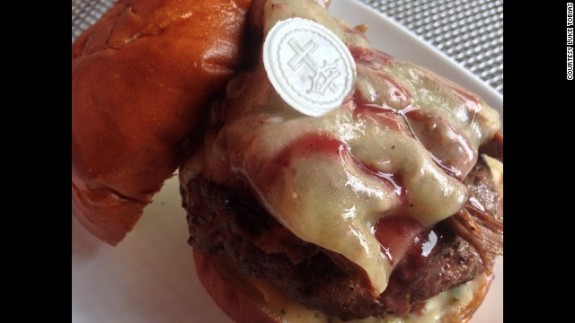 I have no idea what this tastes like. But I can tell you this much:  it’s tasteless. And offensive.

Once again, popular culture deals with Christianity in a way it would never deal with any other major religion.

A Chicago restaurant is pushing the boundaries of poor taste with its October Burger of the Month.

Kuma’s Corner, a heavy-metal themed joint with an “Eat beef; bang your head” ethos, says its new burger is an homage to Ghost, a Swedish band that performs satanic songs in Catholic clerical garb.

“The Ghost” burger features a “Communion wafer garnish,” a white, unleavened disc bearing the imprint of a cross and a crown.

Ghost’s new album comes complete with grape juice and a mock Communion wafer. Not coincidentally, the Communion burger at Kuma’s comes with a red wine reduction…

…Luke Tobias, director of operations for Kuma’s, said the restaurant’s Communion wafers are not consecrated, and thus, not really holy. “It’s more or less a cracker with a cross on it,” he said. The restaurant bought the wafers online from an e-Bay-type website.

They’re not trying to make a big religious statement, Tobias said, just trying to have fun honoring a band they like.

October 3, 2013
Government shutdown could mean no Mass at Marine base—UPDATED
Next Post

October 3, 2013 On proselytism, Pope Francis has plenty of company
Browse Our Archives
Related posts from The Deacon's Bench