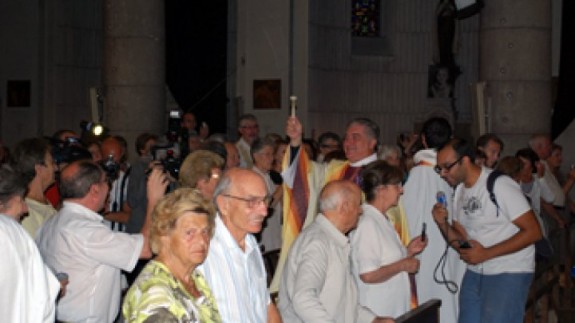 It happened in France:

A French priest in Nice, south-eastern France, this weekend blessed his flock’s smartphones and tablet computers in a service that he stated “embraced the realities of modern life”.

Rather than complain about the occasional 21st century interruption of a bleeping mobile disturbing his congregation’s Christian meditation, Father Gil Florini told FRANCE 24 the devices “should be recognised as a powerful source of potential good”.

“Everybody has a mobile phone, and it is the Church’s duty to bless those things that help people in their daily lives,” said the priest. “People think of the Church as old-fashioned, but there’s nothing wrong with being modern. Blessing smartphones is a reminder to Christians that their mobile devices can be used to do good in the community.”

Father Florini said the newly-sanctified gadgets – that he lightly sprinkled with holy water – were now under the protection of the Archangel Gabriel, the Roman Catholic patron saint of messengers.

And he was happy that his call for parishioners to bring their mobile devices had also been good for attendance numbers – his congregation for the service doubled to 750.

October 1, 2013
Poll: rise in American Jews who are not religious, marrying outside the faith
Next Post

October 1, 2013 "He. Is. Peter."
Browse Our Archives
Related posts from The Deacon's Bench