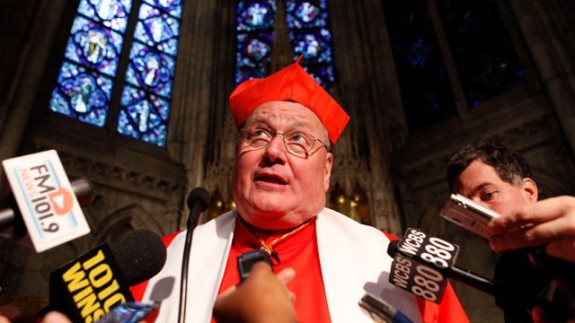 A top Roman Catholic cardinal says he regrets that the church is portrayed as “anti-gay” for supporting traditional marriage between a man and a woman.

Cardinal Timothy Dolan, archbishop of New York, told NBC News that the church has been “out-marketed” on the issue by an array of people, including politicians.

Comments by Pope Francis apparently had an impact on Illinois House Speaker Michael Madigan and other legislators when the state House of Representatives voted earlier this month to pass legislation allowing gay marriage, according to theChicago Tribune.

“If a person is gay and seeks God and has goodwill, who am I to judge him,” Pope Francis said in July.

Dolan, known for his outspokenness, earlier this year called for Catholics to be more conciliatory toward gays and lesbians who may feel left behind by the church’s opposition to homosexuality and same-sex marriage.

The legal battle over same-sex marriage has moved to states, following the U.S. Supreme Court’s decision striking down a tenet of the federal Defense of Marriage Act.

“I think I’d be a Pollyanna to say that there doesn’t seem to be kind of a stampede to do this,” Dolan told David Gregory of Meet the Press. “I regret that. I wish that were not the case for the states.”

November 29, 2013
Group launches boycott of Radio Shack over "censorship" of the word "Christmas"
Next Post