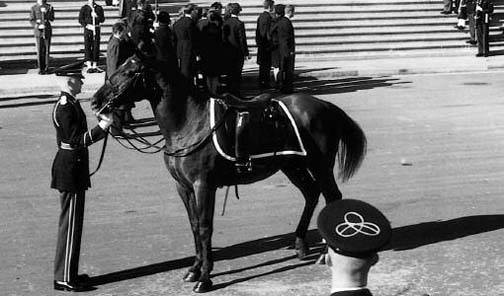 Now here’s an angle of the Kennedy assassination I hadn’t seen before:

WHO WAS BLACK JACK?

Most of you at least will have seen a photo of JFK’s funeral procession.  In those photos, you always see that marvelous riderless black horse who carried a saddle with boots turned backwards in the stirrups.  This magnificent horse was Black Jack.

WHERE DID HE COME FROM?

The origins of Black Jack seem to be a bit muddled.  They know when he was foaled, January 19th, 1947.  But, they don’t really know his breeding.  Most agree he was probably a mix of Morgan and Quarterhorse.

He was purchased by the US  Army Quartermaster on November 22, 1953.   Black Jack had the honor of being the last of the Quartermaster–issue horses branded with the Army’s U.S. brand (on the left shoulder) and his Army serial number 2V56 (on the left side of his neck).

WHAT IS A CAPARISONED HORSE?

I asked the same thing.

The Caparisoned horse is the riderless horse who follows the caissons (6 horses pulling the cart which carries the casket of the fallen soldier).  The caparisoned horse represents the soldier who will no longer ride in the brigade.  The caparisoned horse wears the cavalry saddle, the sword and backwards boots in the stirrups, symbolizing the end of his tenure.  If you watch any footage of military funerals, you will see this horse.

After Black Jack retired, “Sgt.York” carried on this tradition. However, there is a huge time gap between when Black Jack retired and when York came into service.  I couldn’t find which horse was used in the interim.

“Sergeant York” was formerly known as “Allaboard Jules”, a racing standardbred gelding. He was renamed (in honor of famous WWI soldier Alvin C. York) when he was accepted into the military in 1997. He served as the riderless horse in President Reagan’s funeral procession, walking behind the caisson bearing Reagan’s flag-draped casket.

He was foaled in 1991, sired by Royce and out of the mare Amtrak Collins sired by Computer. He is a descendant of the great racing stallions Albatross, Tar Heel and Adios.

HOW DID BLACK JACK BECOME THE CAPARISONED HORSE?

The Army made a full apology to the family involved but the family responded that the fire in that horse equaled the fire in the loved one they were burying.  To them, Black Jack was a symbol of the life that had been.

So, his job was secured.  From that day forward, Black Jack , with his famous white star, walked in over 1000 funeral processions and worked for 24 years.

November 23, 2013
Called back: an ex-Mouseketeer's journey from Paganism back to Christianity
Next Post

November 24, 2013 Flip this abbey: six Catholic couples buy South Dakota monastery
Browse Our Archives
get the latest from
Catholic
Sign up for our newsletter
POPULAR AT PATHEOS Catholic
1