Curt Schilling stands up for his daughter—and wins 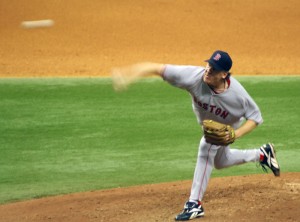 Tony Rossi has the scoop:

Former baseball great Curt Schilling … tweeted a congratulatory message to his daughter for making it onto the Salve Regina University softball team next year. Soon after, the vulgarity about his daughter started.

Schilling wrote on his blog:

I started to see…tweets with the word rape, bloody underwear and pretty much every other vulgar and defiling word you could likely fathom began to follow.

Now let me emphasize again. I was a jock my whole life. I played sports my whole life. Baseball since I was 5 until I retired at 41. I know clubhouses. I lived in a dorm. I get it. Guys will be guys. Guys will say dumb crap, often. But I can’t ever remember, drunk, in a clubhouse, with best friends, with anyone, ever speaking like this to someone…

Instead of taking the abuse lying down, Schilling used some detective skills to track down the anonymous tweeters online and publicly call them on their bad behavior on his blog.

The Atlanta Journal-Constitution picks up the story:

Citing the word rape and other sexual comments, Schilling took to his personal blog to vent on the topic.

“The amount of vitriol I’ve heard is not an issue,” Schilling wrote. “I am sure I’ll hear more. But I have to ask, is this even remotely ok? In ANY world? At ANY time?”

Schilling went on to note in his blog that he tracked down the names of some of the more vile cyber bullies, which he claims include the vice president of a Theta Xi fraternity chapter at Montclair State University and a DJ at Brookdale Community College in New Jersey. The Twitter accounts of both involved have now been deleted and suspended. NJ.com reports that the Montclair graduate, identified as Sean MacDonald, was fired from his part-time job as a ticket seller for the New York Yankees shortly after the tweets were posted. A Yankees representative said, “We have zero tolerance for anything like this.”

Meanwhile, Brookdale suspended the other student involved. “Our sincerest apologies to Gabby Schilling,” the school posted on Facebook. “Her achievement should be celebrated and not clouded by offensive comments.”

“Nobody should be able to get away with saying things like that [about] a father [and his] daughter,” Gabby said on ABC’s “Good Morning America.”

March 4, 2015 Just in time for Lent: Bacon Soda
Browse Our Archives
get the latest from
Catholic
Sign up for our newsletter
POPULAR AT PATHEOS Catholic
1