Look who turned up in a Q & A over at America, our own Elizabeth Scalia:

What do you do as managing editor?

I seek out strong writers who have something to say about the life of faith—in all of its glories and its teeth-gritting difficulties. While some writers lean left or right, they’re all starting out from a rather centrist position that says, “I may sometimes have difficulty with it, but I do trust and try to live with the teachings of the church.” 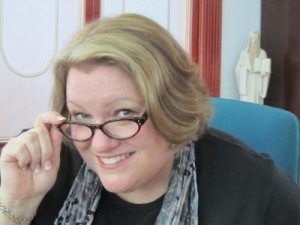 To my way of thinking, the struggle is the whole story of faith; writers who are willing to bare and share the highs and lows that come with living an engaged Catholic life become effective evangelizers, simply by the authenticity of their witness. Reading about a young Catholic mother struggling with a contraception teaching that she affirms in spirit but finds challenging in the flesh—and watching the effect that challenge has upon her openness and her spiritual growth—is incredibly powerful, ultimately faith-affirming stuff. I am sometimes asked why there are no stoutly dissenting “progressives” writing in the channel, or Latin-loving “traditionalists,” and the answer is simply this: there are plenty of sites on the ’net where people can find Catholics who would prefer that the church be something different than what she is; they’d like to pretend that the Second Vatican Council never happened, or else they’d like to pronounce that Council as insufficient and move on to a Third. Situated as we are, within a multi-faith platform where at any given moment a Muslim or a pagan or an atheist might stumble in, I feel duty-bound, both to the church and to the visiting reader, to create a place that presents the church as she teaches herself, and give a fair representation about what it’s like to try to live in conformity to those teachings. There is plenty of grousing, but also moments of grace and glory, and no one is saying, “if only the Church would conform to me, instead.”

Or, if they do say it, it’s a wry sentiment, and possibly rye-scented, too.

Catholic blogs are sometimes a source of infighting and hurtful exchanges cloaked by the anonymity of electronic communication. In your role at Patheos, how do you navigate those tensions?

“Infighting and hurtful exchanges” is a nice way of putting it. Another way is “Internet Catholics be crazy.” It’s really sad, and these episodes are not always anonymous, either. Some of our bloggers have closed the combox because they’ve just had enough of aggressive people who seem to have no lives and boundless energy for battle; a few of us close them after a set number of days, because generally 48 hours into any discussion it becomes a repetitious indulgence of the obsessed. On social media, if I have the time, and the energy, I’m happy to take on someone who is being aggressive, and sometimes—if the people involved are operating in good faith—that can be very productive and end very well. Once, a four-day discussion over Twitter ended up with someone going back to confession for the first time in years (I went too!). When that happens, it makes the rest of it all seem worth it.

That’s just for starters. Read it all. 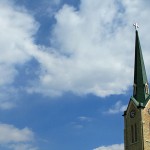 March 4, 2015 Curt Schilling stands up for his daughter—and wins
Browse Our Archives
get the latest from
Catholic
Sign up for our newsletter
POPULAR AT PATHEOS Catholic
1