Faith in the center ring: how Ringling Brothers ministers to Catholics under the big top

CNS’s Chaz Muth and Tyler Osborn have produced this lively look at one of the most unusual ministries in the Church.

Check it out (and check out that chasuble!):

The Arlington Catholic Herald has more:

The Ringling Bros. and Barnum & Bailey Circus Blue Tour came to Fairfax in April with 16 performances at the George Mason University Patriot Center. There was a three-day lull between blocks of performances, so an April 14 Mass was celebrated that included baptisms, confirmations and first Communions for the children of performers. The celebrants were Fathers Jerry Hogan and Frank Cancro, both longtime ministers to the circus.

Father Hogan is known as the “circus priest” and his chasuble, resplendent with elephants, lions, zebras and clowns with a large patch on the back proclaiming “The Greatest Show on Earth,” is a testament to his attachment to the circus. His position is an official U.S. Conference of Catholic Bishops appointment. 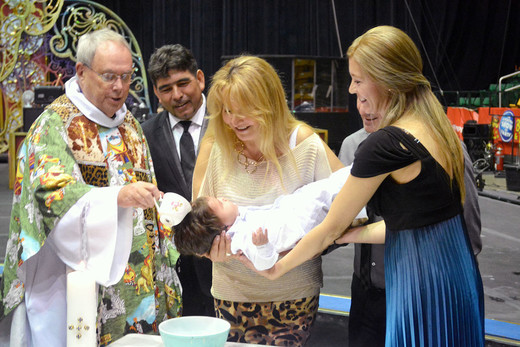 Father Hogan has a hectic schedule, having spent 146 days last year with the circus ministry. When asked why he keeps up this pace, he said he fell in love with the circus when he was young. He’s loved it ever since.

Father Hogan has been doing this for 22 years. He is the fourth chaplain to serve the circus since 1928. For many years he served at parishes in the Archdiocese of Boston, but when he’s not on the road, he lives and serves at St. Martha Church in Sarasota, Fla. — the “circus church.”

Father Cancro’s attire was a bit muted with only an elephant embroidered at the bottom of his stole. Father Cancro, a former circus clown, is now the pastor of Queen of Apostles Church in Belmont, N.C. He tries to visit circuses and minister to circus people whenever he can.

The Patriot Center is an unusual setting for a Mass. It’s known more for basketball and concerts. Guy wires crisscrossed the ceiling of the arena and were anchored to the floor, keeping speakers, scaffolds and powerful arc lights steady and safe. The altar was set up in the center ring in preparation for Mass, and seats were arranged for family and friends.

A trumpet announced the beginning of Mass as the candidates for baptism, confirmation and first Communion, processed from behind a large, red curtain bordered with gold and silver stars with “The Greatest Show on Earth” written on top.

“Today is a celebration of God’s love in the center ring,” said Father Hogan. “This arena is your temple.”

April 28, 2015
Despite resignation, Bishop Finn to ordain priests next month
Next Post

April 28, 2015 Bishop plans to return sacraments of initiation to "their proper order"
Browse Our Archives
Follow Us!