Dublin archdiocese is banning photographs being taken during religious ceremonies, in order to protect children from potential abusers.

Each diocese in Ireland has been directed to have guidelines governing the filming and photography of children while they are on church grounds.

The move derives from standards issued by the National Board for Safeguarding Children in the Catholic Church in Ireland (NBSCCC) in 2008.

“It’s to avoid a situation whereby photos get into the wrong hands of potential abusers,” said Ger Kenny, spokesman for the NBSCCC.

“The risk issue is people will be taking pictures of kids who are not related to them, and for inappropriate reasons.”

Annette O’Donnell, spokeswoman for the Dublin archdiocese, said there is a ban on taking photographs during any religious ceremony in the archdiocese.

These include Confirmations, Baptisms and weddings.

“The guidance issued to all churches is that no photography is allowed during Mass,” she said. 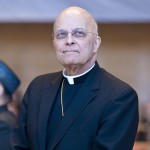 May 12, 2015
On Cardinal George: "The whole notion of him being this arch conservative is so wrong..."
Next Post

May 12, 2015 And when can we expect a series mocking Jews and Muslims? Hmmm?
Browse Our Archives
get the latest from
Catholic
Sign up for our newsletter
POPULAR AT PATHEOS Catholic
1