Thy will be done.

They are more than words in a prayer for Norman Erb-White. They’re part of his life journey.

Erb-White, 47, of Ambridge is or, more accurately, was an Anglican priest. Until Saturday, when Erb-White and five of his six children were received into the Roman Catholic Church at Good Samaritan Parish in Ambridge during the Easter Vigil Mass.

Erb-White was raised in the United Church of Christ — a preacher’s kid nonetheless — and he said he felt called to be a pastor.

“We jokingly call it (preaching) the family business,” he said, because his mother and a sister are United Church pastors, something Erb-White also initially pursued.

“A year through that, I realized, hey, I’m no longer a UCC,” Erb-White said.

He had married Deborah, who was raised Catholic, and they had become Episcopal and then Anglican as a compromise between their faiths. They started a family, and Erb-White became an Episcopal, then Anglican, priest.

But he had been attracted to Roman Catholicism since he attended Mass with Deborah and studied the faith before they married in 1994.

“We’ve been praying and thinking about the Catholic thing for this 20-plus years,” Erb-White said.

But, Catholic priests, aside from rare exceptions, are celibate, single men. And. He. Was. Married.

“I could never square that circle. I was called to ministry as a married man,” he said.

So while he appreciated the Catholic faith, he continued to serve as an Episcopal and Anglican priest — as a hospital chaplain during an internship at the Veterans Affairs hospital in Pittsburgh and at churches throughout the region.

Then, one day, while officiating an Anglican Mass at a church in Brownsville, Erb-White was distributing Communion when he said he felt God tell him, “You don’t belong here.”

Read the rest.  The article notes that, for now, Erb-White will be practicing the faith as a layman. He doesn’t know yet if he will seek ordination as a Catholic priest. Pray for him and his family as he discerns his future.

Pittsburgh Catholic featured the family in a recent profile:

His process of leaving Anglican ministry was delayed by the pending retirement of Anglican Bishop Robert Duncan. Norman took his case to his successor, Bishop James Hobby, who graciously helped him establish contacts in the Catholic Diocese of Pittsburgh. As residents of Ambridge, Norman and his family entered the Rite of Christian Initiation of Adults program at Good Samaritan Parish.

“We always decided that the family would be a single-faith family,” he said. “This is what we would do together.”

Deborah was comfortable with the decision, pointing to the influence of her mother, a devout Catholic with an active prayer life. “I never knew a time when I didn’t know Jesus,” she said.

Their lives have long been in harmony with Catholic teaching, Norman said, citing his wife’s strong pro-life stance and desire to have a big family. Two of their children are adopted. The first priority of the parents is to share their faith with their children.

“The certainty of the faith. The authority of the magisterium. The beauty of the liturgy,” Norman said. “Why would I not want my children to do those things?”

He said that the RCIA journey is “just the beginning,” and he looks forward to delving deeper into the Catholic experience of faith. Learning about beliefs that are not part of Anglicanism — such as purgatory — is especially interesting.

Norman is eagerly awaiting his first reconciliation because private confession is rarely practiced in the Anglican tradition. People need more spiritual and pastoral support, he said, and they can get that by visiting a priest over and over in reconciliation.

“If you want to live in the kingdom now, clean yourself up,” he said. It is an opportunity, he added, for pure grace. 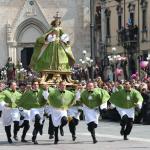 April 2, 2018
The thrilling Easter tradition of 'The Running Madonna'
Next Post

April 3, 2018 'Almost unheard of': Father and son both preparing for ordination to the priesthood
Browse Our Archives
Related posts from The Deacon's Bench