That question has been a recurring refrain over the last several days—and grew louder after yesterday’s action, signing into law a sweeping bill that essentially allows abortion at any time, even to the last trimester.

Cuomo’s own bishop slammed the law in the strongest terms.

But some think he has not gone far enough. So they ask: Why hasn’t Cuomo (and other Catholic pols who support abortion) been excommunicated?

A few years ago, canon lawyer Ed Peters addressed that:

To those wanting the immediate excommunication of pro-abortion politicians, I have to say that canon law simply does not read that way. To make a long story short, an excommunication for abortion has to be linked to a specific abortion and, given the structure of American government and medical institutions, one simply can’t link a given legislator’s vote with a specific abortion within the limits of causality recognized by canon law. Now, I like to think that the words of law generally mean what they say. If we distort the words of penal canon law to the degree necessary to make legislators fall within the present terms of the abortion canon, we would do violence to the text of the law, and that’s always bad; distortions in law tend to come back and haunt us in other contexts.

Of course, maybe it’s time to redraft the canon law in this area, precisely to help the Church deal more directly with the grave scandal and harm being caused by pro-abortion Catholic politicians; but the law itself would need to be changed. I’m certainly open to that, but as I’ve said, the rule of law means that such changes must come about in accord with the law.

In the meantime, though, as I have also pointed out many times, there are most certainly immediate actions that the Church can take against pro-abortion politicians, and I’m happy to say that some bishops are doing that. I have in mind here, for example, the withholding of the Eucharist under Canon 915 from those whose conduct in government office is objectively gravely evil. Elsewhere, I have argued that Canon 1369 gives us canonical leverage against those who use their public office to spread contempt for the gift of life. I look at several of these options in the book, and people can also go my website, www.canonlaw.info.

You can also find more here.

For those curious, here’s a rundown of some American Catholics who have been excommunicated.

UPDATE: A few people have asked how the Cuomo situation might compare with the excommunication of segregationists in New Orleans in 1962. At that time, Archbishop Joseph Rummel ordered all Catholic schools to be desegregated.

On the Monday before Easter April 16, 1962, Archbishop Joseph Francis Rummel of the Archdiocese of New Orleans excommunicates three segregationists for organizing protests against the archdiocese for his decision to integrate church schools.

The Vatican gives its tacit approval to this move, and it’s a major issue because half of the white students in New Orleans are enrolled in Catholic schools.

The three are Judge Leander Perez Sr., Jackson G. Ricau of the Citizens Council, and Una Gaillot, president of “Save Our Nation Inc.” and author of the pamphlet God Gave the Law of Segregation to Moses on Mount Sinai.

Archbishop Joseph Francis Rummel had written to them on March 31:

“[You] promoted flagrant disobedience to the decision to open our schools to ALL our Catholic children and have even threatened and incited others to take reprisals, legal and otherwise, against our action. …

In the spirit of fatherly solicitude we deem it our duty to admonish you that any further attempt by you through word or deed to hinder our order or provoke our devoted people to disobedience or rebellion against the Church will subject you to excommunication.”Because none of the three have heeded the warning, they are excommunicated today and the edict stipulates that only Archbishop Rummel can lift the penalty. This means that they must repent directly to the archbishop and no one else.

It appears they were excommunicated not because they supported segregation, but because they “promoted disobedience to the decision to open our schools to all our Catholic children…[working to] hinder our order…”

In other words, they disobeyed an order from their bishop and encouraged others to do the same.

UPDATE: Msgr. Charles Pope offered his opinion on all this in the National Catholic Register. Excerpt:

All canonical penalties that can apply should be applied here. Omitting such penalties, as has been done in the past, and staying in “dialogue” with such politicians has been of no avail. It must be made clear to all that no Catholic can support such legislation. But the Governor and others have done even more, they have called for celebrations and hope that other states will follow the “bright light” of their example.

This cannot be allowed to stand without canonical penalties. I am not a canon lawyer, but the truth is clear that Governor Andrew Cuomo is not in communion with the Catholic Church. At this point canonical penalties forbidding him to receive Holy Communion — or even, if possible, issuing a formal excommunication — are simply affirming what is already true and what he himself has done. To fail to issue all possible canonical penalties at this point would, to my mind, show the Church to be irrelevant and a laughingstock.

And that has prompted this latest post from Ed Peters:

1. Cuomo is already barred from the reception of holy Communion per Canon 915 (a sacramental disciplinary norm, not a penalty) in light of his openly living with a woman to whom he is not married. This matter was widely discussed back in 2011. My understanding is that Cuomo, to his credit, has not approached for holy Communion since that matter was aired.

2. Regardless of Cuomo’s ineligibility for holy Communion on other grounds, his conduct in regard to New York’s new abortion law also suffices, in my view, to bar him from holy Communion per Canon 915. If information should reach ecclesiastical authority that Cuomo is, despite the foregoing, being given holy Communion by ministers under their authority, Church leaders should act immediately to prevent such administration. Canons 375, 381, and especially 392, among others.

3. Cuomo is not liable for excommunication for abortion under penal Canon 1398. I have made this argument many, many times and won’t repeat it here. Neither is he, in my view, liable for prosecution as an accomplice to abortion per Canon 1329.

4. Cuomo has, however, committed acts that, in my view, suffice to invoke penal Canon 1369 against him. That possibility occasions some observations for Catholics forming their expectations about exactly who in the Church could be doing exactly what in a case like this.

Read on for the specific details of the canons. 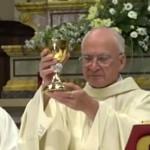 January 23, 2019
The 71-year-old grandfather who is also a priest: 'The Lord called me, grabbed me by the hair, but I ran away'
Next Post 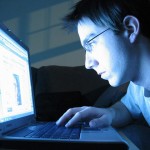 January 24, 2019 Pope Francis released his message for World Communications Day — and it's one we need today
Browse Our Archives
get the latest from
Catholic
Sign up for our newsletter
POPULAR AT PATHEOS Catholic
1