What a remarkable glimpse we had into the spiritual life of Hillary Clinton!

At a televised town hall in Derry, New Hampshire, on Wednesday, she said gratitude is a spiritual lifeline for her, a way to get through each day.

And she learned it, she said, reading Henri Nouwen’s beautiful little book, The Return of the Prodigal Son: A Story of Homecoming.

Maybe I was struck by it simply because I, too, love Henri Nouwen, the Dutch Catholic priest who wrote 40 books before he died in 1996.

Or maybe I loved hearing a presidential candidate speak about the universe rather than “to God be the glory” in her unexpected – and I believe unscripted – four-minute answer to a rabbi’s question.

(I’m not endorsing Hillary here, but I do look for spiritual moments in current events. I also wrote recently about Donald Trump and his use of spiritual law.)

The rabbi asked Hillary how she balances the ego strength necessary to run for president – a type of confidence often delivered bombastically by candidates – with the humility we are called to acknowledge in the realm of the divine.

It prompted Hillary to talk about the challenges of running for office and of having lived a very public life, without the whining or defensiveness we have sometimes heard from her.

I suppose it’s possible that Hillary’s answer was calculated to let evangelical voters know she, too, has a relationship with God and the Bible.

Or maybe she felt safe in an audience of Democrats with CNN’s Anderson Cooper at her side.

But I suspect she was relieved that someone finally understood what a real human being might go through while running for president, and decided in that moment to reveal a little more than usual of her inner musings, which is always a political risk.

WHAT’S IN YOUR POCKETS?

The question came from Rabbi Jonathan Spira-Savett of Nashua, New Hampshire, who quoted a Hasidic rabbi of the late 18th and early 19th centuries, Simcha Bunim.

“Every person has to have two pockets, and in each pocket they have to carry a different note,” he said. “And the note in one pocket says, ‘The universe was created for me!’ And in the other pocket, the note says, ‘I am just dust and ashes.’ “

He asked about Hillary’s two pockets, balancing the assuredness to be leader of the free world with the awareness that a mere human can never be all-knowing or all-wise.

The former senator and secretary of state appeared to be deeply pleased with the “absolutely wonderful question.”

“I think about this a lot,” she said.

“I feel very fortunate that I am a person of faith, that I was raised in my (Methodist) church, and that I have had to deal and struggle with a lot of these issues about ambition and humility, about service and self-gratification — all of the human questions that all of us deal with. But when you put yourself out into the public arena, I think it’s incumbent upon you to be as self-conscious as possible.”

She said she never expected to run for president, although she has always been devoted to public service. For decades, she supported her husband’s political career while working in advocacy law and rearing their daughter Chelsea.

“I’m constantly trying to balance: How do I assume the mantle of a position as” – she paused to choose her words – “essentially august as president of the United States, and not lose track of who I am, what I believe in and what I want to do to serve? I have that dialogue at least once a day in some setting or another.

“And I don’t know that there is any, ever, absolute answer like, ‘Okay, universe, here I am, watch me roar!’ Or, ‘Oh my gosh, I can’t do it, it’s just overwhelming, I have to retreat.’

“It’s that balance that I try to find in my life, that I want to see back in our country.”

GRATEFUL IN ALL THINGS

This is not merely an issue for candidates for high office.

Hillary talked about her “group of faith advisers” and a minister who emails her a scripture lesson every morning. Rabbi friends send her notes, she said.

“It’s not anything I’ve ever talked about this much publicly. Everybody knows I have lived a very pubic life for the last 25 or so years, and so I’ve had to be in public dealing with some very difficult issues – personal issues, political, public issues.”

It was Nouwen’s book that taught her to practice the discipline of gratitude, she said.

“So regardless of how hard the days are, how difficult the decisions are, be grateful.

“Be grateful for being a human being, being part of the universe.

“Be grateful FOR your limitations. Know that you have to reach out to have more people be with you, to support you, to advise you.

“Listen to your critics, answer the questions, but at the end be grateful. Practice the discipline of gratitude. And that has helped me enormously,” Hillary said.

Gratitude might be an Oprah-esque quality that is basic to anyone on a spiritual path, but it is powerful nonetheless.

And, politics aside, I like to think of a presidential candidate – any of them – going through their exhausting and exhilarating days looking for ways to be grateful. 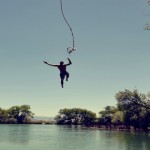 February 1, 2016
The Presidential Campaign: A Study in Joy
Next Post 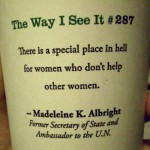