God Is Not on Cruz Control

Blogsphere confessional: despite my thick skin when it comes to what some might consider infringing on the holiness of God, I turned off my T.V. last night. I was terrified by the blasphemy that was reaching my daughter’s ears.

Perhaps the only thing more incongruous to the identity of God than a pro athlete giving all the credit to God for a victory is a politician affixing God’s divine providence to a political victory. “To God be the glory,” proclaimed Cruz. A sentiment that I can get behind–for all the great things that God has done. 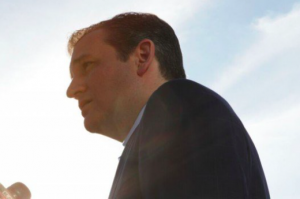 But the blasphemous coincidence of God’s glorious action and Cruz’s garnering a plurality of the vote in Iowa must never be our song of praise.

Getting the Story Wrong

At the risk of overgeneralizing, here is my basic assessment of American politicians who attempt to infuse their campaigns with divinity:

The glory that they see coming to them from God’s hand, and the glory they see as God’s shiny reflection in an exceptional America, are completely antithetical to the identity of God as made known in the story of Jesus Christ.

The greatest trap in which Christians become ensnared is the trap of thinking that the God whose power gives us all life is the same god whose power is reflected in earthly measures of greatness.

We assume, in other words, that the power structures of our world are instituted to tell the divine story and reflect the divine glory.

And when we give ourselves to these assumptions (as we all have at times), we deny the gospel story and the God who is made known through it.

The story of Jesus makes known to us the identity of the Christian God. If you’re not Christian, that’s fine, your G/god can have some other identity. But for those of us who proclaim that the Lord over all is none other than the Crucified, it is blasphemous to align God with the worldly glory of political victory.

In 1 Corinthians Paul is dealing with a similar problem: people being drawn to the wise and powerful. And so he retells the story of the cross: Christ crucified is weakness to the Jew and foolishness to the Greek. The glory of God, in other words, is hidden in suffering and death.

In the dark and shameful history of the church we have sinned at times by so associating the Jews with Jesus’ death that they have been labeled “Christ killers.” Perhaps it would be better for us to affix this label to every ruler, every king, every president, every senator. These are the embodiments of the rule of the rulers of this age. These are the ones who “crucified the Lord of glory.”

Indeed, Cruz himself rested his victory on the most powerful force we have: not the hand of God, but the clamor of the people. The crowds. (NB: at this point one returns to the Gospel stories to see how well things turn out if we follow the whims of the crowds. Spoiler: I think we end up chanting at the seat of Pontius Pilate.)

So yes, to God be the glory–and that is a glory that comes when the Ted Cruzes and Hillary Clintons and Donald Trumps and Barak Obamas and Bernie Sanderses have their work exposed as the glory of the darkness that the shining light overcomes, the glorying in death that gets shown up for shame when resurrection life triumphs.

The point in Cruz’s speech where I threw up in my mouth a little bit was when he cited Psalm 30:5 (with a King James lisp for good measure): “Weeping may endure for a night, but joy cometh in the morning.”

That was his promise. For those who have been sore oppressed by eight long years of Obama’s presidency. The millions who are now covered by insurance “suffering” due to the current administration have hope! God will rescue! God will deliver!

Ted Cruz is the messiah?

This script has been played out before. Or, rather, the hope that such a script would play out has quickened the hearts of many–including Jesus’ earliest followers.

They, too, knew themselves to be the beleaguered victims of years of malfeasance.

They, too, knew themselves to have had their freedoms and rights curtailed by years of distant, federalized rule that made no allowances for what was rightfully theirs.

They, too, knew themselves to be the rightful recipients of God’s promised deliverance–the morning of joy after the long night of weeping.

Rather than a glorious victor, they were given a crucified Christ.

Rather than a revolt they were given the way of the cross.

Rather than seats of honor at Jesus’ right hand and left they were left looking at cruciform thrones on either side of Jesus as he slowly bled out.

It’s not that they, or we, or the people of Iowa, are wrong to name our grievances. It’s that the expectation of a divine deliverance that looks like the exertions of the political power of the world will not be matched in the Jesus story.

The cross is the end to God’s supposed affirmation of our power structures through the installation of God’s chosen within them. The cross is the beginning of a power that can only and always look like weakness. It can only look like defeat. It is almost possible to say that if we want to be sure we know where God is not then we should look to the one wearing the victor’s crown.

Cruz is not God’s man to save us from this hour. Neither is Ben Carson, despite the YouTube video singing his praises as such. Neither was Barak Obama. Neither is Bernie Sanders.

What, then, are we to make of our presidents within this biblical narrative of upside down power?

First, any resemblance that their policies or persons bear to the coming reign of God will be a happy accident for which we should be grateful. But it can never be one and the same. Any resemblance is God’s gracious manifestation of life out of a culture of death.

Second, most of what gains praise and accolades and votes likely requires forgiveness. Yes, it is great that we are a secure people with relatively little upsetting our peace and tranquility. And this is bought at the high price of drone strikes that kill “collateral” as indiscriminately as they kill the targeted suspects. The “peace president” is a source of terror so that we might sleep soundly.

Third, figuring out in this context how to faithfully integrate our faith with our politics is a big mess. It’s well and good to think that the Bible tells us that we should welcome the stranger. But why should that be public policy? It’s well and good to believe that we are called to turn the other cheek, but will that protect the people of this nation?

But however we attempt this messy, awkward dance of being a country of faith-filled people and a nation led by politics, we who name Jesus as Lord have a responsibility to get our story straight.

If the glory we claim in the name of Jesus is recognizable as glory to the clamoring crowds, that’s our most sure sign that the story we’re living has little to do with the Story we proclaim. That will always be the story of the crucified Christ, of the shamed crowds, and the wagging heads of mocking power. 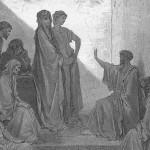 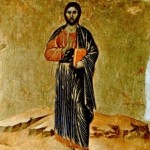