This is the first in an occasional series of encore presentations of some of the most significant posts from my old blog page. What follows is a post from October in which I articulated the way forward I had found for fully accepting LGBTQ people in the church.

Those of you who have been reading my blog for any time at all know that I have been on a journey with the question of how to love our gay neighbors as ourselves. If you’ve read Jesus Have I Loved, but Paul? you know that the biblical prohibitions on same-sex intercourse have kept me from being “open and affirming” in church, even while I’ve advocated for full rights for LGBTQ folks in society.

Today I am participating in a forum in which I will be advocating, for the first time, for the full inclusion of LGBTQ people within the life of the church, and for the church’s support of these sexual and gender minorities in their quest to follow Jesus and their quest to sustain lifelong committed partnerships with the partners of their choice.

As a New Testament professor, the greatest struggle I’ve had as I have wanted to be more affirming of my LGBTQ sisters, brothers, and others, has been the scriptural prohibitions.
I still think that the Bible speaks out with one voice against same-sex intercourse, across both testaments, in a general sort of way. Romans 1 isn’t talking about temple prostitution or pederasty or slave-sex in particular (for instance).

I do have a few reservations about the biblical texts in light of other cultural factors now, but that’s not what my talk today is about. And I still have more work to do on those biblical questions.

The Other Biblical Framework

In Jesus Have I Loved, but Paul? I suggested that there was a biblical way forward for full inclusion of LGBTQ folks in the church. That paradigm is “inclusion of the Gentiles.” It fits with the narrative theological approach in which God does new things in new days and times.

The power of this paradigm is that it represents a seminal moment when the identity of the community itself redefined what being part of the faithful people of God entailed. Words like “sinner” and “righteous” took on new meaning as these outsiders were included without making them adopt the practices of the majority in-group.

Moreover, the basis for their inclusion and the manner of their inclusion was not that the biblical texts either demanded or allowed it, but that God has already included these people.

Similarly, the question for us today is not, “What does the Bible say about same-sex intercourse?” but “How do I love my LGBTQ siblings who, full of the Spirit, are united to Christ alongside me?”

What did it mean to include Gentiles in the Jewish church? Three big things:

These concerns are so distant for us that I don’t think we often realize what a massive revision this was in not only the identity of the people of God, but even what biblical faithfulness to God looked like.

Here’s a few things about circumcision:

Did you get all that?

But when God accepted the Gentiles, pouring out his Spirit on them without their being circumcised (Acts 10, Gal 3), the church said, “It’s our job to recognize what God has done and accept them as they are.”

The Spirit showed who was part of the body already, and the body God created was the standard by which these otherwise-outsiders were judged.

Food laws are God-given. They are not just Jewish traditions.Food laws are a way that Israel got a re-do on the Garden of Eden: another chance to be faithful to “You shall not eat.”

And food laws were a way that God separated Israel from its Gentile neighbors.

But then Peter has this dream:

“Look, Peter! Creepy crawly things! Eat up!”
“Never, Lord! Nothing unclean has ever passed my lips.”
“Don’t you go making impure the things that I have cleansed!”

That’s in Acts 10. And the dream functions on two levels at once. First, it is a metaphor for the Gentiles. Second, it means more literally that food laws will no longer mark God’s people. See the accusation in Acts 11: He goes to Gentiles–and eats with them!

But notice the language of the divine voice. It does not say, “This stuff was never impure–wake up!” It says, “What I have purified…” In other words, there is a moment when the church becomes aware that God has done a new thing.

Yes, Gentiles were impure. But God has purified them.

What are we to do with the fact that among our churches, all of our churches, evangelical and mainline liberal alike, and everything in between, we have among us washed, justified, purified siblings–washed by both the Spirit and baptism–who are still LGBTQ, even in committed relationships?

Paul expected that this would change, that if someone was “effeminate or homosexual” he would have been changed through that washing so as to inherit the kingdom of God (1 Cor 6:9-10).

But now we have this: the washed and justified who are still gay, who are our sisters and brothers and co-heirs with us of all that is Christ’s.

Is it time for us, not to “accept them into the body,” as though we were making some momentous decision ourselves, but to recognize that God has already accepted them–and we simply need to acknowledge what God has done?

The thing that caught me up for the longest amount of time on LGBTQ inclusion is sin. It is listed among the sinful vices that keep us from God’s Kingdom. This makes it different from other measures of equality, like women and slaves, for instance (though the hermeneutics aren’t so different as we might want to believe–just do some digging into what ancient people said about women, or what our American forebears said about slavery or integration).

But even here, the inclusion of the Gentiles shows us that the identity of the people of God shapes our definitions. Yes, the definition and content of “sin” changed when God included this new group. And Sabbath is the place to see it most clearly.

I believe it is literally impossible to make a stronger case for keeping any law of God than the OT case for Sabbath:

That’s right: when Isaiah looked to the time that we would say came with Christ, he expected that joining the people of God would mean keeping Sabbath.

But once the Gentiles are on the scene?

If anything defines sin, surely it’s the Ten Commandments (more than, say, Lev 18)? But no, once the Gentiles were here that changed. It changed because Sabbath had become an identity marker for Jews, and Gentiles were being included without their becoming Jewish.

For Paul and Peter, before Christ came meant, “We are Jews by nature, not sinners from among the Gentiles.” Gentile = sinner.

But there came a moment when they realized that “righteous” no longer meant, “within the Jewish law.” So, the definition of sin got turned on its head: “If I rebuild the law as the marker of God’s people, then I prove myself to be a transgressor.”

There’s no going back.

The Spirit, Jesus, and Paul

We have gay and lesbian sisters and brothers. We have transgender and gender queer siblings in Christ. This means they are standing here in this Christian family alongside us, and their very presence demands to be accounted for in the identity of the people of God.

What does it look like to love our LGBTQ siblings? I have come to the conclusion that it means recognizing that the same Spirit that is at work in me to move me into the faithfulness and, yes, ethical life that is the fruit of the Spirit is also at work in them.

I am not surrendering the notion of sexual ethics, but inviting LGBTQ people into the same difficult sexual ethic of life-long committed partnership that Christ has called me to. Or, offering myself as a fellow traveler for LGBTQ people who follow Christ through the difficult route of celibacy, as some of my straight friends are also walking right now.

Like the circumcision party of the early church, we could exercise our faith by pointing to the Bible verses that say that this is not ok, it is out of step with scripture and maybe, even, that it is not actually happening.

Or we could, like the apostles, exercise our faith by pointing to what it seems that the Spirit is doing and walk by that Spirit in our embrace of those whom God has already embraced. This is the road I’m choosing.

Because I see God as the one who has adopted these beloved siblings of mine, I am choosing the path of faith which refuses to separate what God has joined together in the body of Christ. 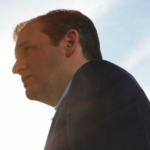 February 2, 2016 God Is Not on Cruz Control
Recent Comments
0 | Leave a Comment
Browse Our Archives
Related posts from Storied Theology