SELMA: The Fierce Urgency of Now 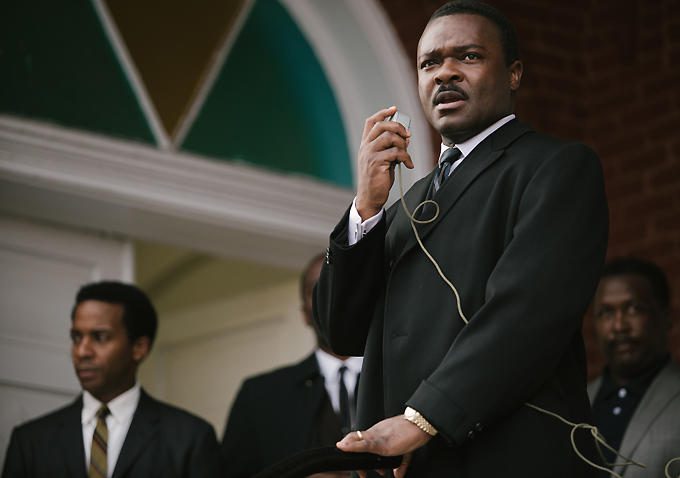 What does courage look like? Does it come with confidence, the swagger of certainty?   Or does it spring from something more fragile, vulnerable, and costly? Selma offers a feature length portrait of Dr. Martin Luther King, Jr. that rises above clichés that drag so many bio-pics down. Far from a stodgy hagiography, Selma is enormously entertaining and remarkably resonant. King’s marches may look clear and strong in archival footage but what kinds of confusion and doubt preceded them?

Selma takes us behind the scenes, to the infighting, the maneuvering, and the faith-fueled introspection that fueled the Civil Rights movement. By exploring the quiet, private struggles of Martin Luther King, Selma elevates his accomplishments to even greater heights. During an era when audiences are obsessed with superheroes, it is refreshing to see the humanity behind a genuine American hero. And a time when religion often looks like the source of conflict, it is encouraging to see how a deep, abiding faith can also lead to positive social change. Selma reminds us how much sacrifice was involved in securing basic human rights for African Americans and challenges us to remain ever vigilant. It is a vital and dynamic portrait of “the fierce urgency of now” and the best picture of the year.

Instead of taking a “greatest hits” approach to MLK’s checkered life, director Ava DuVernay and screenwriter Paul Webb have focused the story upon a single campaign amongst the many Southern cities in which the Civil Rights movement was forged. Selma, Alabama is ripe for protest because of the massive gap between the local African-American population and the public voting records.   Local leaders’ efforts to suppress black voters make the town a potent test case for justice and equality. 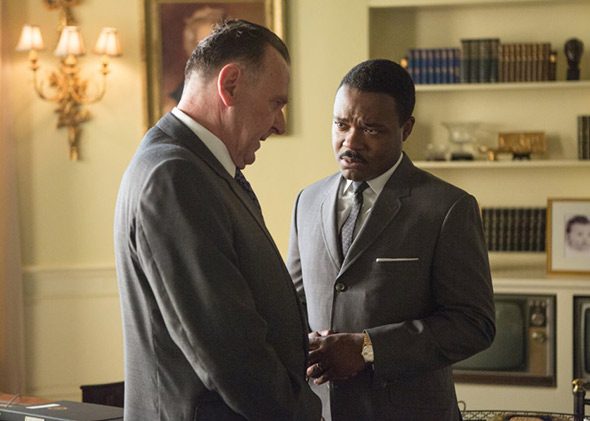 In private meetings with President Lyndon Baines Johnson, King presses for laws that will secure the right to vote for all people, regardless of color or creed.   The president asks King to “set this aside for awhile, sensing that Congress and the American people have already encountered enough upheaval with the landmark Civil Rights Act of 1964. LBJ wants to focus upon his ‘war on poverty’ next. Yet the fierce urgency of now, inspires King and his leadership team to ramp up their efforts in Selma because of its potential for galvanizing public opinion and raising white consciousness. 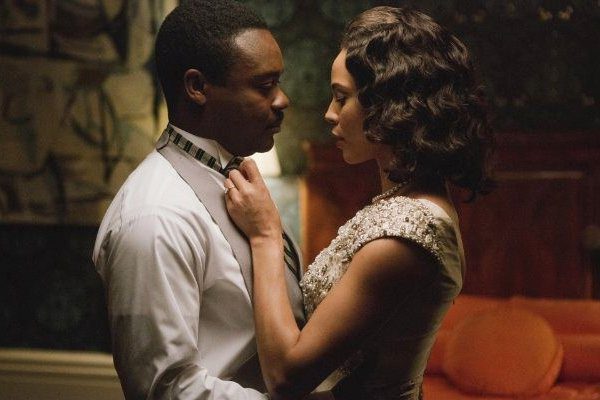 Back home in Atlanta, Martin cracks that Selma is “as good a place to die as any.” Yet, his wife, Coretta Scott King isn’t laughing. They both bear the considerable weight of the movement. It is a heavy burden, pulling them further apart.   While the public Martin is clear and unwavering, the private Martin needs to hear the Lord’s voice. He places a phone call to Mahalia Jackson in the middle of the night and asks her to sing. “Precious Lord, Take My Hand” becomes a plaintive prayer from a conflicted and reluctant leader.

Selma also shows the tensions amongst the organizations that comprised the movement. The strategies of the Southern Christian Leadership Conference seem too staid and slow for the younger Student Non-Violent Coordinating Committee. Is it time to negotiate, demonstrate, or resist? We come to see the wisdom in waiting for Selma Sheriff Jim Clark and Alabama governor George Wallace to make a mistake. The streets of Selma and the steps of the County Court House provide a perfect stage for confronting a racist system.   Unfortunately, those non-violent marches provoke real beatings and create martyrs like Jimmy Lee Jackson. 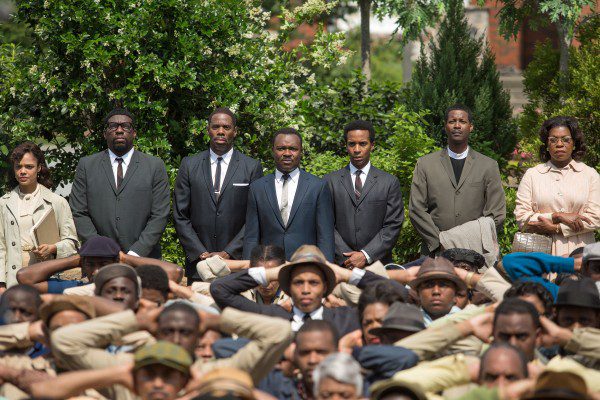 Selma places the soaring rhetoric of Dr. King within the context of great tragedy.   His sermons arose out of profound pain, delivered to communities that desperately needed hope, comfort, and reassurance. They were not necessarily written with an eye toward history, but to salve a gaping, open wound. From the pulpit, Reverend King reminds us that “God is the first to cry” for fallen young men.   In asking, “Who murdered Jimmy Lee Jackson?” Dr. King and Selma snap us into our current context.   Pastors and leaders are still wondering why young African-American lives can be snuffed out without a trial or even charges.   Selma arrives as a remarkably prescient picture in this juncture of America’s conflicted history of race relations.   It took over forty years for a studio to make a feature about Martin Luther King. Selma suggests that we haven’t traveled as far from the cries of the sixties as we may think.

British actor David Oyelowo captures the rhythm and cadence of King’s speeches with startling veracity and spirit.   But it is the stillness of his moments in jail talking with Dr. Ralph Abernathy or driving with a young John Lewis that bring the man to life.   How rare to see an actor underplay ‘greatness,’ to truly believe that more power is conveyed through understatement.   Oyelowo may not win the Oscar he deserves, but his performance will stand the test of time.  Carmen Ejogo also conveys the weariness of Coretta Scott King in her body language.   We definitely believe they both have never gotten used to the constant closeness of death. 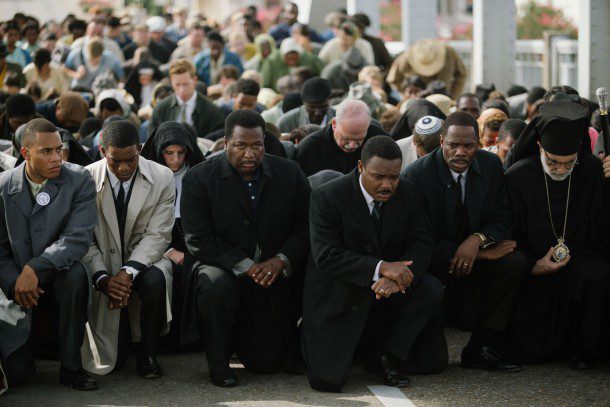 Selma builds toward a climatic march on the Edmund Pettus Bridge.   Once again, director Ava DuVernay avoids the traps that make cinematic biographies feel lifeless medicine.   Rather than filming the events as a foregone conclusion, she places viewers inside the action with the outcome in question.   She underplays the drama by accompanying the march to the bridge with spare music. Images of faith leaders of different colors and denominations alongside Dr. King are so compelling.   This massive demonstration of moral certainty is juxtaposed with the show of force from Alabama’s troops.   Odetta’s spare rendition of “Masters of War” tell us almost all we need to know about what happened on that “Bloody Sunday” and why. 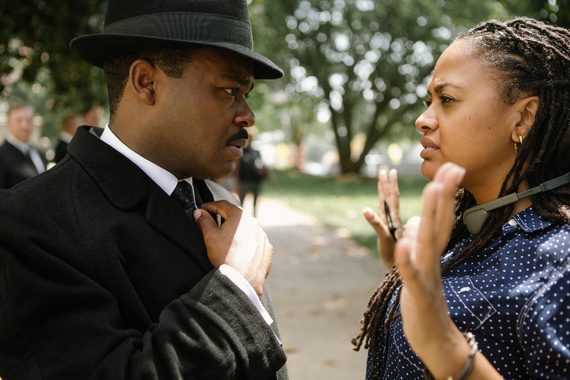 Some have questioned the veracity of DuVernay’s portrait of President Johnson. Was he more supportive of the march in Selma than the movie portrays?  Probably. Was he also aware of J. Edgar Hoover and the FBI’s efforts to undermine the King’s marriage?  Probably. How sad that fifty years on, we’re arguing over how much credit white folks deserve in initiating the Civil Rights movement rather than celebrating Hollywood’s first film about Martin Luther King, Jr.   Could the filmmakers have attempted to portray George Wallace and Jim Clark with more nuance? Perhaps.   Yet, those who aligned themselves with “Segregation Now, Segregation Forever” cast their own place in history. 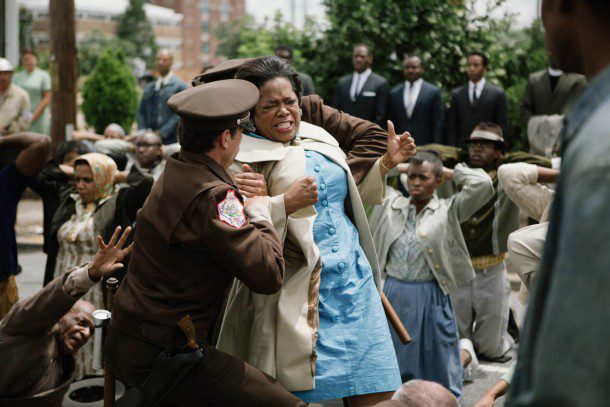 One movie also cannot do justice to each of the seminal figures swirling around Selma.   Brief glimpses of pioneers like Annie Lee Cooper, Amelia Boynton, Andrew Young, and James Forman or lawyers like Fred Gray and pastors like James Bevel and Hosea Williams suggest just how many stories remain to be told about the long (ongoing) march to freedom. 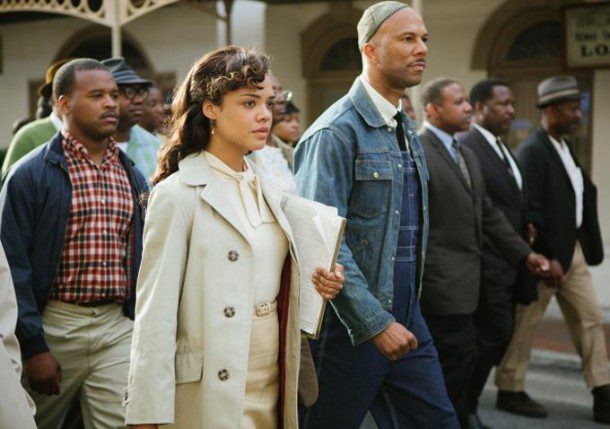 It is far too easy to reduce history into a sound bite like “I Have a Dream” or think that a national holiday celebrating King’s birthday will suffice.  My children were riveted by the film and inspired by John Legend and Common’s rallying rap about “Glory” that runs over the closing credits.   Selma reminds us the struggle for justice and equality is filled with steps forward and backward. The additional impediments recently placed upon potential voters in Texas, Kansas, and North Carolina suggest the gains made by the Voting Rights Act of 1965 can still be endangered.   Justice is an ongoing negotiation that requires constant vigilance.  Civil rights are dependent upon responsible journalists, contentious politicians, and informed citizens.   Clergy and artists must offer spiritual sustenance for those men and women of goodwill committed to the cause. The team behind Selma have done their part. Now, how will we respond?

February 9, 2015 COMMON BRINGS GLORY TO THE GRAMMYS (AND THE OSCARS): An Interview
Recent Comments
0 | Leave a Comment
Browse Our Archives
get the latest updates from
Doc Hollywood
and the Patheos
Entertainment
Channel
POPULAR AT PATHEOS Entertainment
1