I was in a funk last week. I don’t remember why. Maybe I’d read too many articles about climate change. Maybe I’d heard “45” talk too much that day. Maybe I’d simply spent too much time on Facebook. I’m part of the Resistance–I think? Are we even still calling it that? I was feeling much more hopeless than #resist-full.  I thought if I ran errands I’d feel accomplished and therefore, better.

I got in the car and drove round the corner. But when I saw it, I cried.

Someone had drawn a swastika and “White Power!” in chalk on the sidewalk at the entrance to my neighborhood.

Based on the “penmanship” and a joke about someone’s sex life was scrawled next to it, the culprit was probably a bored teenager. Even so, it turned my stomach.

I called the police who said it had already been reported. They would send the city to clean it, but it might take a while.

I had no idea what were the best supplies for cleaning up nazi-graffiti. I’ll probably get comments saying I did it wrong. (They don’t teach nazi graffiti removal in most BA programs, k???) I couldn’t bring a hose, so I bought a giant bottle of water, a scrub brush, and a tube of natural soap to the intersection. My husband came along to keep an eye out because, sadly, we live in toxic times. What if it wasn’t just dumb teenagers? What if we have a nazi club out here and they come after me?  I didn’t want to do it, alone.

It started to rain and the more I scrubbed, the angrier I became. Yes, for the ugly message, but also, selfishly, because I’d wanted to write that afternoon. My husband had just come home that morning from a long trip and was jet-lagged. Yet there we were, slowly getting drenched because of hate. I could have ignored the graffiti and spent the afternoon at my computer, but I know I never would have written knowing it was out there. I would have been too angry to concentrate.  I might as well do something good with my angry energy. For one, I wouldn’t have to look at it anymore. No one would.

As a Witch, nothing is ever just a “thing.” A scrub brush can quickly become a wand. Soapy water becomes a brew. Angry thoughts become spells:

‘Dear Great Goddess of Justice
May it be so that these symbols never come to light again,
May hatred be cleansed from this city as the water over the chalk,
May kindness reign and compassion be abundant,
And may the people who did this learn from their mistakes,
And maybe catch gonorrhea, too–that’d be great.
So mote it be.’

We’re in a time when hatred is spitting and spewing and it gets so. Fucking. Overwhelming. Some days I feel strong and I’m ready to organize a march, make 100 phone calls to senators, engage a Trump supporter in a conversation to try to do this mythical thing called “bring them in.” Other days, I feel completely worthless and useless and the whole situation feels way too big–as though I were going to try to drink the ocean. Oddly enough, the most important work happens on those days.

When we are breaking down, Magick floods where we have cracked. And that is when we can use our powers–not just for scrubbing sidewalks, but infusing those sidewalks (the very paths shared by others), with the power to make change.

And, just maybe, a nazi will get gonorrhea. 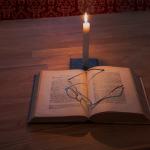 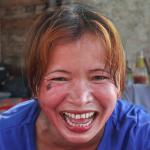 June 11, 2018 The Goddess Laughs...At Me.
Recent Comments
4 Comments | Leave a Comment
"Thank you for sharing your thoughts on the series! It puts the show in a ..."
Aelfrey Tools of Resistance in “The Dark ..."
"I've never expected the Pagan Gods to function the same as the Christian God is ..."
Wolf On A Break With The Gods
"A wonderful article describes many useful things about daffodils, really extraordinary flowers. By the way, ..."
Anny Wiliams Using Daffodils in Magick
"On my recent Imbolc meditation with her, she set me on fire, using an imagery ..."
Melissa Brigid: She’ll Burn Your (Metaphorical) House ..."
Browse Our Archives
get the latest updates from
Double, Toil and Resist
and the Patheos
Pagan
Channel
POPULAR AT PATHEOS Pagan
1

The Pathetic Life And Death of...
The Zen Pagan
Related posts from Double, Toil and Resist