The Tricks of Desire

I needed something to change. Something really meant everything. Everything was wrong and everything needed to change: my home, job, friends, hair, spiritual path. My husband and I needed to move–someplace far away, and very different than where we were.

I’d felt like this for days, the feelings sprouting as suddenly as a roach in the bathtub, creating every bit as much revulsion in my body. I hated where I was and what I was doing.

I was living a first-world sort-of dream, and suffering definite first-world problems. My husband and I had a great apartment. We didn’t even need roommates anymore to help us pay for it. I liked my job. It was interesting work and paid for me to go to Pagan festivals. I was healthy. Our cats were healthy. Yet I was ready to burn it all down and start over, somewhere else.

Why did I need to flee so badly? Was I getting a psychic hit that a terrorist attack was imminent? What change did I need?

I went to my altar, lit a candle, and went deep into me. Sorting through the panic, the insecurities, the fear, I expected to find some childhood trauma or–like the empaths say–I needed to drop the crap of otehrs.

But a tiny voice at the root of it all simply said:

I hadn’t had water all day! Maybe dayssss….I’d been running on coffee, carbs, and air. During all of the busy-ness (or simply being lazy with the self-care), I hadn’t taken care of myself. Dehydration had set off the latent hunter-gatherer in me, which surely thought I’d landed in a desert. It had been urging me to change my circumstances, immediately. The need for water had nearly convinced me to quit my job, abandon my apartment, and teach my husband (and myself) to hitchhike to the Rockies or something.

When I finally hydrated, the need to flee disappeared. I looked around my home and felt peaceful. While there is always room to improve a life, the one I had was fine. There was no need to run away.

I desired water. By ignoring that desire, I was set out to destroy and consume. How many other desires have I ignored over the years, only to seek to fill them up in less-fulfilling ways? For a decade I told myself and the world that I wanted to be an actress. But being only an actress wasn’t enough. I needed to be EXTREMELY FAMOUS. IF I COULDN’T BE THE MOST FAMOUS ACTRESS EVER, THERE WAS NO POINT IN EVEN TRYING.

I skipped over learning and digesting the craft of acting, focusing instead on networking and charming my way into auditions…and only to fall apart when I got there. When I saw the shows later, I didn’t regret not playing the role. I regretted not getting the applause or the line on my resume. One day, I realized the applause was all I ever wanted. I wanted approval–from peers, but even more, from myself. Good gods…was that all it was? How many years could I have devoted to things that truly filled my soul had I learned that, first?

There is an enormous mall of an economy out there built to satisfy people’s wants. But are these wants misplaced? Are they symptoms of a greater desire?

How big is this problem? Is this world carving up its forests and filling the oceans with plastic coffee lids because we are filling up with the wrong things? It may take only a thimble to fill desire, but we fill up swimming pools in the attempt to satisfy it, but continually miss the mark when we don’t recognize it.

We equate desire with sex and food. Yes, desire can mean those things and often does. But what if many desires are simpler? A touch, a breath of fresh air, a moment of quiet, a place to cry?

Desire is tricky like that. It doesn’t make itself known. We have to dig and find it, but that, itself, is part of the journey.

If the Goddess truly is That which is attained at the end of desire, then to know Magick and the Goddess, Herself, we must start by listening to the small voices within that can tell us the exact nature of that desire. 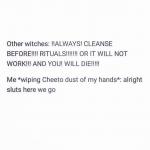 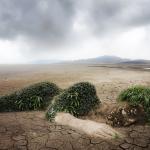 August 7, 2018 5 Ways Your Offerings Hurt the Environment (and Five Easy, Eco-Friendly Alternatives!)
Recent Comments
1 Comment | Leave a Comment
Browse Our Archives
get the latest updates from
Double, Toil and Resist
and the Patheos
Pagan
Channel
POPULAR AT PATHEOS Pagan
1

Hoodoo How We Do: Underwear Spells
Voodoo Universe
Related posts from Double, Toil and Resist