SERIES: Reflections on the Most Holy Theotokos and her Dormition

Over the duration of the Dormition Fast on the New Calendar (August 1-15), I wrote fifteen reflections on the presence of the Most Holy Theotokos in the world. The final post was written last week, just in time for the Feast of the Dormition.

The idea came to me because I had written a draft of something on my own relationship to the Theotokos prior to the fast. In fact, I was trying to write a Catholic corollary to my piece on learning to ‘fall in love’ after being sucked into the evangelical vortex of Josh Harris’s book I Kissed Dating Goodbye. The piece grew too long, and I tried to break it up and expand it. In that process, what began to happen is that sometimes my own writing resisted me when I attempted to make statements that were not-quite-true. Because of this, some of the posts themselves became vastly expanded. The stuff about Josh Harris went onto the cutting room floor. Perhaps I will return to it some other day.

One of the problems I discovered as I wrote, on which I hope to reflect more in my future writing, is that a current of identity politics runs through any attempt to publicly contemplate the person of the Theotokos and her mysterious bodily presence in my everyday life and in the common home of our shared earth. One has a relationship with the Virgin Mary, for example, because one is Catholic. One protests that the Latin formulations are colonizing because one is Orthodox. One doubles down on strictly Byzantine formulations because one is Greek Catholic. One shares about the pagan antecedents of the Divine Feminine because one is Kyivan. One denies that Mary is present in heaven or on earth – or reduces her to a symbol, at the very least – because one is Protestant. Each of these statements may be true, and the assertion of one’s way of relating to the Theotokos is necessary in the face of those who might colonize and silence such ways of being. But if one is not careful, then suddenly, the reflection is no longer about Mary of Nazareth and her continuing work in a world that is enframed by the supernatural. It might be, at the end of the day, only about me.

I recently conferred about my writing with a friend of mine, and we agreed that we write to save our souls. There is an obsessive impulse that serves as an undercurrent for the work that we both do; we write with fear and trembling, working out our salvation. As I have worked through the posts on the Theotokos, it became clear that personal experiences with the Mother of God are so intense that it is easy to confuse my subjective encounter with what is actually happening, so fused are these two parts of meeting the Ever-Virgin. Writing is a way to disentangle both, and in the process, what I am describing is both about me and about what is going on in the world.

I do not think I have done this perfectly in my fifteen posts, but I offer them as a starting point for further reflection. Perhaps I will rework them as my thinking matures, but until then, these are my reflections as they currently stand.

#1: The bearing of God, the death of triumphalism

#2: ‘I see the Blessed Virgin standing next to you’

#3: Being afraid of the Theotokos as Catholic, charistmatic, carnal

#4: On my fundamentalist feminist theology

#5: Like a weaned child with its mother: on the ideological nonchalance of doxology

#6: ‘More Catholic than the Catholics’: a tale of transfiguration

#7: ‘Theologos, save us?t Whaaat?’: through the prayers of the Theotokos

#9: The primal catholicity of the Immovable Wall

#10: The private consensus is unraveling

#11: The children of the New Eve have lost their innocence

#12: The conversion of the goddesses

#13: The presence of the Wise Older Women

#14: The assumption of the people

#15: The theology of the Dormition 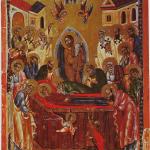 August 15, 2017
The theology of the Dormition (Dormition Fast #15/Dormition Feast)
Next Post 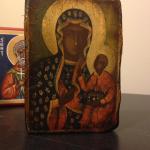 August 28, 2017 Race and the passions: musings on the Feast of St Moses the Black, St Augustine of Hippo, and Blessed Gebremichael
Recent Comments
0 | Leave a Comment
"I can't believe you would consider the theological lightweight Kilby as a proper critique of ..."
antoniodec Fiat mihi secundum verbum tuum: on ..."
""Milbank criticizes Balthasar for being apolitical in his aesthetic reflections, and I can see how ..."
antoniodec Reading Sobrino on Óscar Romero and ..."
"the word is receptive, which has nothing passive about it but could be the most ..."
antoniodec Fiat mihi secundum verbum tuum: on ..."
"One can never "go home," not in this life."
billwald I’ve found my way home: on ..."
Browse Our Archives
Related posts from Eastern Catholic Person