Grounding theologies: owning my personhood three years out from the Umbrella Movement

A day after the Umbrella Movement began on 28 September 2014, I sat down to write something about it; it has now been three years. What I did not realize is how much this moment would alter my consciousness as a person.

What I wrote on 29 September 2014 became a blog post on Catholic social teaching in Hong Kong democracy, which then turned into a talk that I gave at the University of Washington, which then became a peer-reviewed publication, which led to a forum on Syndicate on The Umbrella Movement and Theology, which then led to me being the lead editor of Theological Reflections on the Hong Kong Umbrella Movement (Palgrave, 2016), in which I have two reflective chapters on whether the Umbrella Movement counts as an instance of liberation theology as well as a long primer on why Hong Kong’s state, market, and civil society are bases for theological reflection even if these seem like secular categories. I had written my doctoral dissertation on Cantonese-speaking Protestants and Pacific Rim civil societies, so this was all par for the course for my research.

Before the Umbrella Movement, I think I would have described myself as a researcher. Hong Kong is part of my research, Cantonese Protestants are my informants, and when I spoke about theology – because I was a) not trained in theology, but in geography and therefore b) thought of myself strictly within the boundaries of religious studies, which takes an arms-length approach to religion, no matter what my position is – I would say that I map theologies instead of doing them. Because of this, I thought of the Umbrella Movement as my research, and I struggled between my own feelings of being inspired by the movement and wanting to keep my distance as a researcher. After all, my conviction as a researcher was that what I think about anything doesn’t matter very much; it’s what my subjects on the ground think that I am supposed to find interesting. In fact, that was pretty much the point of my article in Progress in Human Geography on ‘grounded theologies’: what is interesting theologically is not what I think, but what people doing theology (which does not include me) are actually doing.

And interested in the movement and its grounded theologies I was. I had been tracking the movement since it began while I was dissertating for my PhD in 2013, and I had issued a call on my blog when the Sunflower Movement happened in Taiwan in early 2014 to keep both eyes on Hong Kong next. By the summer of 2014, the events organized by Occupy Central with Love and Peace (OCLP) had drawn so much heat that Hong Kong felt like a powder keg about to explode. I wrote a series of posts that summer, and I followed the symbolic withdrawal of OCLP from the fight, the student strikes that began on September 22, and the move to occupy Civic Square.

I was at a conference on September 28 on Christianity in the Pacific Northwest, and on the day of September 28, I wrote up my reflections on the connection between my two research sites – Vancouver/Seattle and Hong Kong. But by September 29, it had become obvious that something quite unexpected had happened: far from the expectations that Hong Kong people would be politically apathetic, tens of thousands not only had come down to the streets, but also occupied them.

That got me thinking about the legacy of democracy in Hong Kong and the role of Christians within that movement. In particular, because Joseph Cardinal Zen Ze-kiun was so involved in the protests, I thought about a previous protest, the Golden Jubilee Incident of 1977 – which was a democratic protest against the Catholic bishop of Hong Kong over politics in a Catholic girls’ school. I had written about Golden Jubilee in my PhD, so I thought I’d follow the links further, which led to that series of publications with which I began this post.

But this story of research is really only half of the picture. The truth is that I wasn’t at arms-length, and even my attempts to distance myself from Cantonese Protestants is rarely convincing, as much as I would have considered myself on their theological fringe with my personal convictions about the mysteries of the supernatural mediated through the everyday material and the sense that communion with even the saints who had reposed is a valid conclusion drawn from the fact of Christ’s resurrection. In fact, I got up in arms about the Umbrella Movement because I was still embedded in Cantonese Protestant communities: the day after the protests, an article by Vancouver Sun religion columnist Douglas Todd appeared on the newspaper’s front page citing a Chinese evangelical source saying that Chinese Christians don’t care about the movement and that the students should go home and study. A number of Chinese Christians in Vancouver – by which I thought I meant only Cantonese evangelicals, which I was at the time, despite my Anglicanism (you can be a high Anglican and an evangelical; trust me, I pulled it off for eight years) – were angry about that piece, and it didn’t matter whether one was conservative or progressive in our communities (yes, there are progressive Cantonese evangelicals in Vancouver, even those who advocate for indigenous sovereignty) or whether one was ‘first-generation’ or ‘second-generation.’ Together, we wrote to the Sun, first in a series of individual responses and then with an open letter declaring that solidarity with the poor and those without political agency is part and parcel of Christian practice. I also wrote a lengthy piece on my blog parsing what had gone wrong in that article.

It was also through this that a number of us Cantonese evangelicals encountered an Eastern Jesuit who was also Chinese and who sort of became our de facto spiritual director as we navigated through the tricky waters of discerning the spirits in the Umbrella Movement. As conceptually different as the Kyivan Church and Cantonese Protestantism might seem in the abstract (though I feel like I’ve said plenty about that in my summer series on being Cantonese), what this suggests is that my transfer into the Eastern Catholic church in which I now find myself was part and parcel of being a politically conscious Cantonese Protestant learning the ropes of theological discernment in an occupy movement.

All of this is to say that I have never really been at arms-length with Cantonese Protestantism even in my own research – much less with the doing of theology, which I have only recently come to admit that I have been doing – and my participation in solidarity with the Umbrella Movement sort of gave the lie to that. In some ways, I knew what a liar I was because I really couldn’t help but do theology; this was why I hid behind the mask of Chinglican so that he could do the theologizing on my behalf, or the mask of Religion Ethnicity Wired to say that I’m just commenting on religious news, or even the mask of an academic geographer who will only go as far as to say that I am doing religious studies by mapping grounded theologies at an arms-length. I realize now that I’ll never be able to run, even if I have become Eastern Catholic and am still deeply in love with the Kyivan Church, in which I find not only agreement with my theological convictions that were on the fringes of Cantonese Protestantism, but also the beautiful chaos in a church that is so human in its flaws and disorganization and yet so infused with divine mystery.

And so it is that on this third anniversary of that post on the Umbrella Movement and Catholic social teaching that I never expected to shape my career so much, I have changed my Twitter handle and Facebook page to simply my name – @jkhtse, or ‘Justin K.H. Tse,’ which is the name I use for all of my academic work. My reasoning is that I have spent a year on this blog asserting my personhood and doubling down on the autonomy of Eastern Catholic churches; now these things are obvious both to me and maybe to some of my readers, so much that I can keep the blog, but not have to assert who I am and what church I belong to all the time. I know who I am, and I know where I am ecclesially, and the truth is, I’m quite comfortable with that reality now. I am finally even ok with owning my theological work in the secular academy. I am, after all, the guy who wrote the ‘grounded theologies’ piece in Progress in Human Geography.

A friend told me that when I made these social media changes, I had made a valuable friend: myself. I am finally coming to own what I think, not just what my research subjects think. Herein might lie the difference between a researcher and a scholar, the latter of which I hope to become: it turns out that trying to erase my own footprint from my scholarship is a fool’s errand, and the best possible way forward is to own it instead of deflecting behind professional masks. This is what the brave democracy activists in Hong Kong have, after all, been doing for quite some time, for which they have now received prison time. What’s more, my patron saint is Holy Justin the Philosopher and Martyr, who was killed for his philosophia. I have completely run out of excuses.

Mark this day as an important day, my friend said. Perhaps it is more important than I think it is. Maybe it might lead to a new trajectory of writing, just like what happened three years ago. 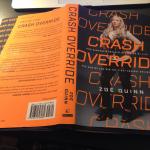 September 28, 2017
More reflections on the Internet, thanks to Zoë Quinn's new book
Next Post 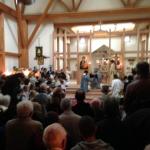 October 3, 2017 My pilgrimage for Pokrov last year
Recent Comments
0 | Leave a Comment
"I can't believe you would consider the theological lightweight Kilby as a proper critique of ..."
antoniodec Fiat mihi secundum verbum tuum: on ..."
""Milbank criticizes Balthasar for being apolitical in his aesthetic reflections, and I can see how ..."
antoniodec Reading Sobrino on Óscar Romero and ..."
"the word is receptive, which has nothing passive about it but could be the most ..."
antoniodec Fiat mihi secundum verbum tuum: on ..."
"One can never "go home," not in this life."
billwald I’ve found my way home: on ..."
Browse Our Archives
Related posts from Eastern Catholic Person