The place of the problematic: for the Sunday of the Last Judgment

For much of my life, I have felt that I have inhabited two separate worlds simultaneously: school and church. I’ll leave it at that as far as it comes to the basic institutions that make up those arenas. No doubt, some will say that it’s obvious that the dividing line between those two sites is that one is secular, the other religious. I am not so sure about that, especially in my own life, because even when I was attending that Pentecostal school in Fremont that was very multi-racial, interreligious, and ecumenical at the level of student experience, I felt that it was a very different world from the Chinese church in Hayward, which had its own diversities among Chinese social backgrounds too. By the time I got to high school, the difference was between a Catholic school in Hayward that I encountered as a profoundly erotic space and a Chinese church plant that professed to be somewhere that could form young Chinese Christians into competent people in the secular world, a vision that met a terrible demise due to trans-Pacific circumstances resembling the plot of a 007 movie.

I did not experience anything that could be validly construed as a secular education until I went to university, and even the secularity of that encounter can be called into question. Right out of the gate at the University of British Columbia, I began noting that the theorists we were reading, especially those influenced by the anti-colonial humanities scholar Edward Said, seemed more interested in picking apart the experience of secularization and noting the theological fragments that circulated in the world. For me, this observation eventually culminated in a doctoral dissertation in geography that engaged the arguments of Radical Orthodoxy to show that Cantonese Protestants operate in a world that can hardly be described as non-theological. Even so, I struggled to get there, mostly through internships at Chinese churches, at first evangelical in the free church sense, and then eventually Anglican, moving up the liturgical ladder from the evangelical Anglicanism of John Stott to the charismatic sensibilities of Third World revivalism and then understanding the spectrum of the big tent that constitute the dysfunctional networks of the Anglican Communion — and then trying to apply that to an understanding of evangelicalism as a public that could be addressed through self-publication on the Internet. These two journeys — to see the theological in the secular academy, and to recognize as someone raised as an evangelical to be suspicious of ‘labels’ that ecclesiology actually matters in the everyday lives of followers of Jesus — may have interpenetrated, but again, they were separate ones, one traversed in the space of the academy, the other in the church.

It is the case even now. I am Eastern Catholic, and my ecclesial practice is far from private — I have a blog, our mission sometimes records our reader’s services, we publish our theological reflections as St Mary of Egypt Social Justice Fellowship. But as much as I try to integrate this world with my professional life, there is always a sense that what I do in the academy will always be separate. What Asian Americanists, religion scholars, geographers, and even theologians care about is not usually about the personal or the applicable, but the social, that which contributes to our intellectual community as we build a society run by intellectuals in the midst of societies that are becoming intellectual wastelands. As much as Ivan Illich has shown that the school was certainly secularized from the church, the school is not the church: they are quite separate institutions, and I belong to both of them.

And yet, one word that pervades both in my own experience of them together, in their simultaneity, is problematic. It’s a word that is particularly applicable to those of us who, having identified ways in which the societies in which we live perpetrate structural injustices, try to work to build a society that is socially just. The injustices are described as problems, and the adjective that is used to amalgamate these problems is problematic. That contemporary trends in the Christian churches and communities often feature public action focused on personal responsibility without a diagnosis of structural injustice can be seen as problematic, as can the inaccessibility of knowledges in the academy to communities that can really benefit from empowering analyses of their conditions of oppression. Edward Said uses the word problematic to describe the term orientalism, the body of knowledge that fantasized about ‘the East’ without accounting for the real people who live there, but when he described it, he also meant it as a thread of problems that could be productively followed as both critique and re-construction.

The Sunday of the Last Judgment, I have been reflecting as I have been going through it from yesterday’s Vigil down through Sunday Vespers, is a great day to meditate on the problematic. It is an odd day of practices, to say the least; the stichera and tropars are all about self-examination to avoid the fires of hell, and the practice is to clear out the meat from one’s home by pigging out on it. In a very bizarre twist of events, a few friends from the mission and I found ourselves awkwardly being accused of lacking self-reflection in our practices, which of course we then reflected on together, and then ended up at a Jesuit house of studies drinking our fill of cocktails over a sumptuous meal of ham and macaroni and cheese.

I think, however, that there is a strange wisdom to this juxtaposition. Only those who don’t know the first thing about social justice, whether in the spaces of activism, churches, or the academy, will glibly use that term social justice warrior out of context from its Gamergate origins and call such people unreflexive. The truth is that if there are a people who are terrified — maybe not always of the fires of hell, but certainly of being found out to be participating in the problematic reinforcement of problems in the institutions that circumscribe their lives — it is people who are into social justice. The self-examination is often rigorous, harshly so, in attempts to root out of oneself the structural sins of racism, sexism, homophobia, transphobia, classism, ableism, and all the rest.

Oddly enough, it is this kind of demanding introspection to which the mothers and fathers of our church wisely call. I had been under the impression that because the Gospel reading at Divine Liturgy is on the sheep and goats being divided on their practices of charity and justice toward the least of these, that the stichera and tropars of the services would have something to do with this kind of social service. It did not. It was all about self-examination, of finding that one’s deeds were not sufficient so that one was in danger of being discarded as trash onto the burning trash-heap of Gehenna, and that the worst sin of all that one might perpetrate is judging one’s neighbour when we ourselves are not practicing the works of justice. It was an odd realization, I found myself reflecting even while singing the services, that here, the obsession with the problematic bridges from church to academy, and back into community, that we are called to examine our complicities with injustice and then beg for mercy from God.

But what is underscored by the mothers and fathers of the church are the practices. This is the connection to that Gospel reading. It is not about what we think, what ideas we have about the world, what fantasies we might project onto it and others. It is about what we are doing, with deeds that speak louder than words that are voiced and thoughts that are tacit. The Last Judgment will be about our deeds of justice, not what we thought of it; it is those activities that we are called to examine. The same body of mine that prays these services and purges meat from my house by devouring it all today, and then going to the Jesuits to eat more, is the one that will be working through my academic tasks tomorrow — teaching, service, research, community engagement. It does not matter that the institutions of church and school are separate infrastructural formations; what matters, the mothers and fathers are telling me, is what I do with my body in those spaces. It has been said by a number of scholar of social movements, the pre-eminent form of advocating for social justice, that their origins lie with the seventeenth- and eighteenth-century Puritans and the Protestant reformers of the nineteenth century. I think there is something to that, but what is more, it makes sense that of all people, they were close readers of Augustine, who attributed the capacity for such action to the working of grace — or as the Puritan theologian John Owen put it, only passion can drive out passion. This is the actual reason I write about evangelicalism even though I am not evangelical — it is that the secular academy in which I work retains evangelical norms in its theological fragments, and as I am not good enough to be an evangelical or a neo-Puritan, I require a still more ancient practice in my church that emphasizes bodily mystagogy in order to survive it.

In so doing, we are called in the Sunday of the Last Judgment to examine the place of the problematic in our lives. And yet, this self-examination is not a call to depression, as it is for so many activists, but to the freedom that culminates in us feasting like publicans and prodigals on this day we also call Meatfare Sunday. Indeed, as we feasted before this fast, I became keenly aware that much of the way that our mission in Chicago is designed revolves around food security. St Mary of Egypt Social Justice Fellowship wants to start a community garden at our parish on the south side, for example, and without revealing too much about our membership, some even in our ranks experience food insecurity as an ever-present stressor in their lives. And yet here we were, feasting with Christ among us, those of us who don’t worry about food with those who do, and I hope that even with our lack of analysis of the structures that plague our members’ lives even while we were having a great time over a sumptuous meal, we will have fed the Lord who is among us. 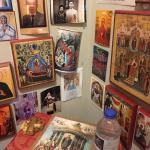 March 2, 2019
The truth is, I didn't know them as well as I should have: for the Saturday of the Dead
Next Post 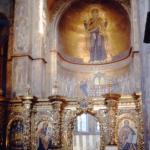