Why did Jesus come then and not now? –Questions from M 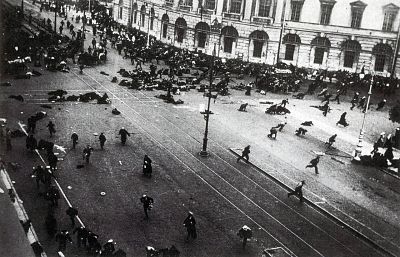 Every year I dreamed of warning the last Russian Tsar of what was to come. In the dream, I would debate what to say to Nicholas II to convince him that Russia was on the edge. The direction had to change. What would convince him?

Was there any way to avoid the basement room in Ekaterinburg where the family was slaughtered as a downpayment on decades of depravity and death?

I never have answered that question well, because the past is always more complicated than my history books claimed. As a boy, I thought (as most of my books preached) that if the Tsar had only liberalized the state then all would have been well. If Russia had moved toward the British model the Revolution would have been avoided, millions of lives would have been saved, and World War II would never have happened. No Red Menace and no Brown Shirt response to that menace.

I am not so sure now, because the Wilsonian liberalism that infected the books of my childhood seems less obviously true. Wasn’t that the error that drove President George W. Bush to invade Iraq? Was Russia in 1913 any more ready for democracy than Iraq in the twenty-first century?

I do not know, but I know that the counterfactuals of history are no longer so obvious to me as they once were. And that leads me to a thoughtful question from my summer interlocutor M*.

Let us say that all the historical details assumed in this question are correct: God came at an ideal time anyway.

How can I say this given illiteracy?

First, God did not come as a book. Jesus came in the flesh. As John 1:14 says: “we beheld His glory, glory as of the only begotten of the Father, full of grace and truth.” God did not send a book, or an online course. He came. The Word became flesh and lived in our midst. You did not have to be literate to see the carpenter from Nazareth.

When Jesus went back to God, He left us the Holy Spirit. The Holy Spirit is not a book. The Holy Spirit makes God real to us in our immediate experience. God is there, He is not silent, and He is real to me. We are people of the Book, but we are not a people because of a Book.

We are a people because God is real and we experience His reality. The literate are not more privileged than the illiterate when it comes time to see, hear, and know.

Second, the Word is captured in the written word. We have God’s message in the books of the Bible. The Bible was formed over a period of time when many people were literate, but not so many that books were taken for granted or good books were swamped by bad.

There are two bad situations (it seems to me) for preserving God’s truth in a book:

God is and we experience God. The Incarnation is recorded in a book at a time when leaders could read and books could be spread over a great deal of the world. At the same time, books were relatively hard to own and so each copy was valued.

The Bible was produced in a culture where books were not weird miracles, but they were also not common. The books of the Bible were written at the perfect time. People knew enough to venerate good books, but the best books were not so rare that only the few could hear them.

The Word became flesh at a time when the words about the Word could be spread widely and taken seriously, while not being drowned out by trivial pursuits.

It seems to me the word about the Word was perfectly timed.

Historical “what ifs” are hard. If the Tsar had done differently, his life of bad choices would not have been redeemed by a noble death. If Russia had gone another way, I do not in fact know that it would have been better. Reality is always at a disadvantage to imagination, because reality has to deal with billions of possibilities, while my dreams only fix one variable.

I want Russia to avoid Revolution. I see the good that would have come, but I do not see the cost.

God sent the Word to be born as Jesus at a time when texts were rare, but not too rare; valued, but not priceless. Jesus came at a time when written words were taken seriously.

The New Testament was written when the written word was pricey, but not priceless. The time was just right.

June 6, 2017
God the Moral Relativist? --Questions from M
Next Post

Hymn of the Day: Lord, Speak to Me...
https://www.youtube.com/watch?v=0nAeVBQIp6w Lord, speak to me, that I may speak In living echoes...
view all Evangelical blogs