The Shield of Ovid (Guest Post by James Harrington)

He continued to the shield of Aeneas and followed up on that post. Now, unexpectedly, we turn to a shield in Ovid:

Virgil’s younger contemporary, Ovid, responded to Rome’s civil wars and the rise of Augustus with a poetic epic of his own. In his Metamorphoses, Ovid sets out to tell a mythic history of the world, from its creation down to the apotheosis of Julius Caesar. He draws a stark conclusion about the nature of reality that is more in keeping with Homer than Virgil: that the nature of Reality is flux and change. Writing as a well-educated Roman, Ovid is careful to give the legends surrounding the Trojan War ample space in his epic, and Achilles’ shield features prominently in Metamorphoses.

Ovid’s depiction of Achilles’ shield occurs at the beginning of Book XIII, during the contest between Ajax and Ulysses for the arms of Achilles after his death. It is a classically Homeric contest that pits eternal opposites against each other: Ajax’s brawn versus Ulysses’ brain. Ajax’s argument is as forthright as the man himself: he is the greatest fighter after Achilles, and Achilles’ cousin, so he deserves Achilles’ armor. Ulysses, true to his nature, tries a more complex gambit. He asserts that his stratagems have won more battles than Ajax’s strength, but includes a curious turn at the crux of his argument:

​​Think, when his sea-nymph mother had that high
​​Ambition for her son, was it for this—
​​That these celestial gifts, this work of art
​​So fine, should deck a rough and doltish soldier?
​​Why, he knows nothing of the scenes embossed
​​Upon the shield, the ocean and the lands,
​​The constellations in the height of heaven,
​​The Pleiads and the Hyads and the Bear,
​​Banned from the sea, Orion’s shining sword,
​​The cities set apart. He claims to win
​​Arms that his brain’s too stupid to take in!*

Ulysses’ erudition wins him the panoply, and a baffled Ajax commits suicide (much like his cousin’s withdrawal from battle after being similarly dishonored). Ovid’s story moves on to the fall of Troy, but the clever poet has left a tidbit here for the discerning. Ulysses will never enjoy the shield either. It will sink to the bottom of the sea in his wrecked ship.** Ulysses, for all his wit, does not understand the message of the shield and is therefore as unfit to carry it as Ajax. Achilles’ Shield, like Metamorphoses, depicts a world of constant strife and instability. Nothing ever stays the same, and so no thing can ever be kept by anyone. Both object and keeper are forever shifting into something else. Ovid, however, claims a different fate for himself:

​​… my name shall never die.
​​Wherever through the lands beneath her sway
​​The might of Rome extends, my words shall be
​​Upon the lips of men. If truth at all
​​Is stablished by poetic prophecy,
​​My fame shall live to all eternity.***

Stability, such as it is, can only be found in the realm of Art, where hammer blows and poets’ words give things a fixed form—a shield and a story. 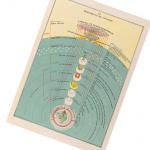 April 18, 2019
Lost and Found: To See the Face of God in the Person of Jesus Christ (Dante Paradise XXXIII)
Next Post 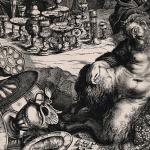 April 20, 2019 The Great God Pan on Holy Saturday
Browse Our Archives
get the latest updates from
Eidos
and the Patheos
Evangelical
Channel
POPULAR AT PATHEOS Evangelical
1