The Atlantis Theory: The Numenorean Connection Between the Works of Lewis and Tolkien

Today is the anniversary of the death of J. R. R. Tolkien. To commemorate this event, I thought it would be good to revisit a theory I’ve posited before: namely, that the works of C. S. Lewis and J. R. R. Tolkien are largely (though not entirely) connected to one another. This connection is put forth almost entirely on Lewis’s side, so it is more as though Lewis, seeing the great works of Tolkien, decided to stitch his own fiction into Tolkien’s. That this works is because Tolkien’s Legendarium ends long before the modern age.

Before I dive in, I should tip my hat to Brenton Dickieson, whose scholarly work made this amateur’s speculations possible. It was Dickieson who first discovered that in an original preface to The Screwtape Letters, the letters we the readers encounter were translated by none other than Dr. Elwin Ransom, the protagonist of Out of the Silent Planet, Perelandra, and a key figure in That Hideous Strength. This combined with my own amateurish searches into elves in the works of C. S. Lewis has resulted in these findings, whatever they might be.

The first thing we have to establish for my theory to work is that Tolkien was interested in Atlantis. This is actually rather easy to do. One simply has to follow the index entry for Atlantis in the one volume Collected Letters.

In a letter to Stanley Unwin dated 14 September 1950, Tolkien writes:

“The Men of the Three Houses were rewarded for their valour and faithful alliance, by being allowed to dwell ‘westernmost of all mortals’, in the great ‘Atlantis’ isle of Númenóre” (Letter 130).

This is followed by a footnote in the letter where Tolkien writes:

“A name that Lewis derives from me and cannot be restrained from using, and mis-spelling as Numinor. Númenóre means in ‘Elvish’ simply Westernness or Land in the West, and is not related to numen numinous, or νοὐμενον!” (Letter 139).

However, we see the connection more firmly made in Letter 227. Here again, Tolkien is writing concerning the etymology behind Númenor, as it appeared in The Lord of the Rings and noting that it is not related to numen, and that Lewis has misspelled it. Tolkien writes, however, concerning these legends and words:

“They are my own use for my own purposes of the Atlantis legend, but not based on a special knowledge, but on a special personal concern with this tradition of the culture-bearing men of the Sea, which so profoundly affected the imagination of peoples of Europe with westward-shores” (Letter 227).

His Numinor was derived, by ear, from Númenor, and was indeed intended to refer to my work and other legends (not published) of mine, which he had heard (Letter 227).

One final piece of evidence from the Tolkien side before I move to Lewis should suffice. We learn from various letters by Tolkien that not only did Lewis hear all these stories about Númenor, but he and Tolkien had made plans to write stories about the origins of our myths. Lewis was to write about it from the perspective of space travel, Tolkien from time travel. Lewis’ Cosmic Trilogy is the result of his work on this. Tolkien never published his story, but Númenor/Atlantis was to feature. While Tolkien makes clear that Lewis had no hand in creating Númenor (Letter 257), it is certainly sensible that Lewis chose to connect his trilogy to Tolkien’s work on the hopes that Tolkien’s work would eventually be published. (Do read Letter 257 for some fascinating aspects of what Tolkien had hoped to do with Atlantis). In any event, Tolkien at the least saw what Lewis was doing as an attempt to graft his own trilogy onto Tolkien’s Legendarium. Letters 276 and 294 both suggest that Lewis latched onto various ideas from Tolkien’s work and knit them into his own.

So, what is the use Lewis makes of Numinor (as he spells it). One key place that Lewis uses it is in That Hideous Strength. He even writes in the preface, “Those who would like to learn further about Numinor and the True West must (alas!) await the publication of much that still exists only in the MSS. of my friend, Professor J. R. R. Tolkien” (THS, 8). But it is not limited to the veiled reference. We later learn that Merlin as a magician (I use that word quite intentionally) was related to Numinor/Atlantis. Lewis explicitly uses both terms. Lewis writes:

“He [Ransom] thought that Merlin’s art was the last survival of something older and different––something brought to Western Europe after the fall of Numinor and going back to an era in which the general relations of mind and matter on this planet had been other than those we know” (THS 198).

On the same page, Lewis writes:

“But if the only possible attraction of Bragdon lay in its association with the last vestiges of Atlantean magic, this told the Company something else. It told them that the N.I.C.E., at its core, was not concerned solely with modern or materialistic forms of power. It told the Director [Ransom], in fact, that there was ildilic energy and ildilic knowledge behind it” (THS 198).

Now, if Tolkien is correct, eldila comes from Tolkien’s Eldar, elves. If we consider that Tolkien at one point considered having his elves actually diminish (that is change in size), in early drafts of The Silmarillion, it is not too far fetched to believe that Lewis took this as an opportunity to make almost non-physical at all. This is actually made more clear when we discover that Tolkien had intended to have characters named Eadwine and Ælfwine who had later decedents, a father and son called Edwin and Elwin. Edwin was to mean “‘one loyal to the Valar, content with the bliss and prosperity within the limits described,'” and Elwin was to mean “‘one loyal to friendship with the High-elves'” (Letter 257). Lewis’s protagonist is, of course, named Elwin and we are in another book told it means friend of the eldila. The connection is not exact, and Lewis’ eldila function more like the Valar and Maiar than like the elves in Tolkien, but still the connection is clear.

This, I think, clearly connects the Cosmic Trilogy to Tolkien’s Middle-earth. What’s more, it connects The Screwtape Letters to Tolkien since they were originally conceived as being translated by Elwin Ransom. So there is only one link more to be forged in this chain I have been constructing. We need, now, to get from the Cosmic Trilogy to the Chronicles of Narnia, and for that, we need look no further than The Magician’s Nephew.

I’ve already written about how Diggory’s Uncle Andrew had a (part) fairy-godmother. Well, she bequeaths to him a box and tells him to destroy it. Uncle Andrew decides not to do as she asks and does research into it. He tells Diggory:

“‘My first task was of course to study the box itself. It was very ancient. And I knew enough even then to know that it wasn’t Greek, or Old Egyptian, or Babylonian, or Hittite, or Chinese. It was older than any of those nations. Ah––that was a great day when I at last found out the truth. The box was Atlantean; it came from the lost island of Atlantis. That meant it was centuries older than any of the stone-age things they dig up in Europe. And it wasn’t a rough, crude thing like them either. For in the very dawn of time Atlantis was already a great city with palaces and temples and learned men'” (TMN, 22).

So there we have it. While it is true that Lewis’ description of Atlantis could refer to any version of the Atlantis myth, the fact that he had already engaged that myth via Tolkien in the Cosmic Trilogy, suggests, at the very least that this is not a simple invocation of the ancient island. Rather, it is an invocation to the Atlantis story as told by Tolkien. Now, it is true that the notion of other worlds Lewis goes on to discuss via Uncle Andrew does not precisely jive with Tolkien’s work. However, even the connection between the different worlds is odd in Lewis’ work since Jadis comes from Charn (another world) but is said, in The Lion, the Witch and the Wardrobe to be descended from Lilith, Adam’s first wife. Still, I think we can safely say that this invocation of Atlantis here should make us think of the same invocation in That Hideous Strength thus connecting The Chronicles of Narnia, the Cosmic Trilogy, and The Screwtape Letters to Tolkien’s Middle-earth.

So, it is not, perhaps, as tidy as I would like it to be, but then Lewis, whom I love, was not as tidy a writer, or perhaps not as tidy an editor, as Tolkien was. I have had to conduct this “research” without access to Lewis’s letters or any of his MSS. which might either confirm or deny my theory. But, in light of the research I have been able to do, I think we can safely say that eleven of Lewis’s books and possibly some of his poetry (cf. Tolkien, Letter 294) are not only indebted to Tolkien’s Middle-earth but are actually meant to exist within the same universe (in fact on the same earth) as it. This was totally, it seems, Lewis’ intention and not Tolkien’s. Still, this reading can add some possible further depth in reading Lewis and Tolkien together. 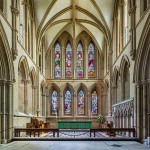 September 3, 2016 Fear of Sleep, Fear of Eternity: Confronting Sloth with the Help of Thomas Aquinas
Recent Comments
0 | Leave a Comment
Browse Our Archives
Related posts from Letters from the Edge of Elfland