Seeing the World through the Lens of Reverence: Michael Martin Presents the Sophia Option

I was preparing quite a different letter for you. I was preparing a letter reviewing Joseph Pearce’s new book, Merrie England: A Journey Through the Shire, a review I hope to send to you tomorrow. But then, as I was taking a brief Facebook break (before doing some reading), I came across a new essay by Michael Martin that I had to share with you and comment on.

Martin is a friend of Elfland, and I’ve shared his call for a Radical Catholic Reimagination of Everything (one I can now more fully participate in as a Catholic) in a previous letter. Here, Martin is following on some of the same principles but grounding it even more to his understanding of Sophia and the sophiological. In, “The Sophia Option,” Martin seeks to amend or correct Rod Dreher’s now rather famous Benedict Option. Martin sees Dreher’s Benedict Option as primarily a response to Obama’s “progressive agenda” regarding such things, “contraceptive mandates, LGBTQ politics, and a tolerance that is anything but tolerant.” Martin admits to sharing some of these concerns, but notes that Trump’s America is unlikely to push any of those agendas (though it has plenty of its own that are antithetical to Christianity). Still, Martin sees the need for a a movement focused on the, “cultivation of communitarianism, hospitality, ora et labora, and so forth.”

The difference for Martin is that of intentionality and fear. Martin sees the Benedict Option as coming from a place of fear, fearing what might happen. Yet perfect love casts out fear (1 John 4.18). Rather, Martin wants to see the vision of the Benedict Option to come from a place of joy as well as a place that looks at the world around us through the eyes of reverence. Martin quotes Psalm 19 to get at his point:

The heavens declare the glory of God,

and the sky above proclaims his handiwork.

Day to day pours out speech,

and night to night reveals knowledge.

There is no speech, nor are there words,

The world, the cosmos is already proclaiming the Glory of the Lord. Martin simply asks that we be attentive to that Glory, to Sophia, the Wisdom of God.

I must say that I am attracted to this “new” option. Like Martin I seek to reveal and subsist in, “The rhythms of nature and their intertwining with the Church year.” I too have often felt, even in my deepest moments that I am person designed for and by Joy, that joviality is an inherent part of my character and thus that it is my responsibility to embody and show forth that Joy, the Joy of the early church. I too have believed that liturgy and things like distributism, and social justice, and gardening are inextricably related to one another in the person of Jesus Christ.

Like Martin, I have been attracted to Benedict Option as well as other “options” that have sprung up along the way. Nevertheless, Martin’s Sophia Option is one that has gotten closest to what I would see. We Christians are called to relate to this world, to be, as Martin reminds us, in the “resurrection business.” Our lives ought to be centered on Christ, particularly as he is present in the Eucharist which is the heart of the liturgy. But Martin’s Sophia Option takes things one step further by reminding us of the cosmological aspects of the Faith.

It is important, of course, to remember that with all these “options” we’re talking about ways we as the Church can live out the Gospel in the world we have now, as well as how we might shape that world for the future. In one sense, therefore, there is no option, or the options are between living intentionally for Christ or not. But in another, real sense there are “options,” there are choices we can make for how we live in the world. Not everyone can sell their homes (especially those who don’t own their homes) move to the country and start a bio-dynamic farm as Martin has. But we can all find ways of seeing the world around us more rightly. In fact, I think this is quite simply Martin’s Radical Catholic Reimagination of Everything just with a title similar to that of Dreher’s.

Martin concludes his essay with these words:

My contention is that if we begin with joy and love for the Risen One and train ourselves to recognize his Wisdom (Sophia) in Creation and in works of creation we will be carrying the seeds of spiritual and cultural regeneration within us and spreading throughout the world. (That we should have been doing this all along and have forgotten to is to our great shame.) If we turn even this joy and love into a posturing for political gain, then, like all such gestures, we introduce poison into what lives. And then it may move around a bit, but it’s already dying. Let such things die. We need to be in the resurrection business: “Did you not know that I must be about my father’s business?” This is what we have to offer the world, a world already so deeply poisoned that it may reject healing as a threat to its existence. Yet, we were given a mandate.

Christ came that the world might be saved through him. I read that someplace. But I can also perceive whispers of that salvation in the night sky, detect it in the scent of apples, hear it in birdsong as well as humansong. The cosmos itself has been redeemed through Him. But we need ears to hear. As World Party once proclaimed (with a nod to William Blake):

And if you listen now

A new sound coming in

As an old one disappears

See the world in just one grain of sand

You better take a closer look

Don’t let it slip right through your hand

Won’t you please hear the call

We can do this. 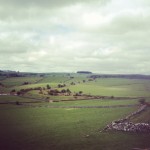 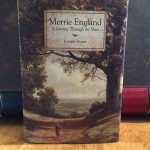 Hilary White Wants to Trash &...
Biblical Evidence for Catholicism
Related posts from Letters from the Edge of Elfland