Deep in the Forest, There Dragons Will Be: Reflections on a Boat Trip Around Lake Winnipesaukee

Deep in the Forest, There Dragons Will Be: Reflections on a Boat Trip Around Lake Winnipesaukee July 6, 2017 David Russell Mosley

My family and I are on vacation with my wife’s family in the New Hampshire Lake Region. Today my little family did our own thing. We headed down to Lake Winnipesaukee and took a boat trip around the lake. While we did so what do you think I told my children to look for? Dragons.

I love to instill a sense of wonder in my children and one of the chief ways I like to do this is to have them search for Faërie. What they might find I can never rightly say, but I’ll never have them stop looking. I never have. Even with the power lines running down the sides of some of the mountains it is so easy to look and imagine the silhouette of a monstrous, flying wyrm against the cloudy sky. My favorite moments are when they the tell me they’ve seen something. A love for the children’s show “Octonauts” also had them looking for colossal squid in the depths.

Yesterday we drove on the Kancamagus Highway which took us through the White Mountains. As we drove we saw the clouds casting shadows in the mountains. When I pointed this out to my children, my son, Theodore, declared them Shadow Mountains. I love moments like this because they are moments of mythopoeia. In that moment Theodore has created something new, something my mythopoetic. Shadow Mountains is so evocative of something mythic. I love it, and plan on stealing it. In fact, I already have.

What drove my imagination as we drove through the mountains were the enormous granite boulders rising up out of the ground. They looked like sleeping trolls, hiding themselves from the sun’s rays as the dappled light just reached them through the canopy. To see creation like this, with the lens of wonder, is, I believe, to see it rightly. This, I think, is what Tolkien was on about when he said that fairy-tales enable recovery of vision. My heavy diet of Lewis and Tolkien and Chesterton and MacDonald has prepared my sight not to see just rocks or trees or mountains, but something more, something truer about creation.

Creation is not just what we see with our senses as secular modernity has taught us to do, but that there are deeper truths behind created reality. It is the difference, in short, between what Paul Tyson–in his book Returning to Reality–calls one-dimensional and three-dimensional metaphysics. One-dimensional metaphysics says the bruit fact (to be rather unfair to bruits) is all there is. A stone is just a collection of minerals, atoms, and quarks. Three-dimensional metaphysics tells us that there are also spiritual, moral, etc., aspects of reality. A stone, by virtue of its existence, participates in God and is thus, insofar as it exists, is true and beautiful (and it may be true and beautiful in other more evident ways as well).

Pope Francis understands this, as did his predecessor (and the Catholic tradition in general). In Laudato Si’, Pope Francis writes:

It is not enough, however, to think of different species merely as potential “resources” to be exploited, while overlooking the fact that they have value in themselves. Each year sees the disappearance of thousands of plant and animal species which we will never know, which our children will never see, because they have been lost for ever. The great majority become extinct for reasons related to human activity. Because of us, thousands of species will no longer give glory to God by their very existence, nor convey their message to us. We have no such right (LS 33).

While I have focused on trees and stones and mountains, Pope Francis reminds us that this applies to animal creation as well (which is evident since it applies to rocks and trees). Later the Pope writes:

The ultimate purpose of other creatures is not to be found in us. Rather, all creatures are moving forward with us and through us towards a common point of arrival, which is God, in that transcendent fullness where the risen Christ embraces and illumines all things. Human beings, endowed with intelligence and love, and drawn by the fullness of Christ, are called to lead all creatures back to their Creator (LS 83).

What the Pope writes about spiritually and theologically is equally and necessarily applicable imaginatively and mythopoetically.

So, as my children continue to encounter nature, whether far off, like the mountains, or up close like the lake, I will continue to engender in them a sense of wonder at the natural world. For this preparation of their imagination will also prepare them for the deeper truths of the One who created it all, the One who united it all to himself on Christmas (really on March 25), and the One to whom and by whom and through whom it is all returning. 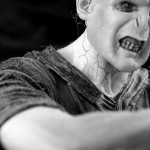 July 11, 2017 The Dragon Is Dead, Still: A Postlude (of sorts) to My Son's Battle with Cancer
Recent Comments
0 | Leave a Comment
Browse Our Archives
get the latest from
Catholic
Sign up for our newsletter
POPULAR AT PATHEOS Catholic
1

More Important than Belief in the...
Messy Inspirations
Related posts from Letters from the Edge of Elfland