Green Men, Fairies, Michael Martin, and the Aliveness of Creation

A few days ago Michael Martin wrote a wonderful post about the Green Man, the land, and Catholicism. I absolutely loved it and strongly recommend it to you. One of the chief points Martin makes is that we need to be reconnected to the land, that this is a theological, a spiritual, as well as a moral good. Martin looks to a particular quotation from G.K. Chesterton to help make his point about what our relationship to land should like and mean. Martin writes:

In considering the sterile benefits of modernity at the beginning of the twentieth century, G.K. Chesterton saw the return to the land as a significant part of the return to sanity: “If we ever get the English back onto English land they will become again a religious people, if all goes well, a superstitious people. The absence from life of both the higher and lower forms of faith is largely due to a divorce from nature and the trees and clouds.” We could use some healthy superstition connected to nature instead of the unhealthy superstition of virtual reality by which our humanity has become so degraded.

Martin thinks that moments like his––of seeing green men, his daughters seeing fairies––point us to a deeper reality a truer reality. I could not agree more. Maybe, I suppose I can entertain the idea that, there are no fairies at the bottom of my garden (though David Bentley Hart would remind us that believing there are is not illogical). But even so, talking about my garden as if it were guarded and tended to by small creatures tells me something true about vegetable life, that it has life. My cucumbers, my favorite tree, my grass are all alive and a little superstition might help me treat them better.

In fact, I have made this very argument in the past when I noticed both Irish and Icelandic tendencies to recognize the needs of the Fair Folk. There may be no elves in the woods, but by believing there are it has changed how people in Iceland and Ireland interact with nature, with creation.

I suppose you might ask, can’t we have this right relationship with creation without the superstition? Can’t we do without fairies and elves? On the one hand, I suppose we can. But the truth is I’ve seen no evidence of it. But, as Martin also says, I’m not asking you to believe in fairies, but at least to remember that Creation is alive and that we are part of it, related to it. There is a reason Pope Francis’ most recent encyclical called our attention St. Francis of Assisi’s “Canticle of Brother Sun.” The Pope too is calling on us to remember that Creation is alive and needs our care. That too, Creation is more than what habit and modern science have taught us to see.

Martin’s post also seeks to contrast nature with the virtual and I suggest you read him for his argument there. For me, I want to end with his penultimate line, “Those of us who go by the name Christian would do well to not confine the numinous to Sundays, for the Lord poured out his Wisdom over all of nature (Sirach 1:9).” 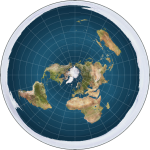 November 26, 2017
When the Church Taught the Earth Was Flat: Flat-Earthism, Geocentrism, and Christianity and Science
Next Post

December 14, 2017 On Culture Wars and Culture Warriors: Wondering Which Way is Up
Recent Comments
0 | Leave a Comment
Browse Our Archives
Follow Us!

Pope's "Querida Amazonia": Reactionaries Step in...
Biblical Evidence for Catholicism
Related posts from Letters from the Edge of Elfland