On Belief in Fairies: Reflections from Robert Kirk’s The Secret Commonwealth

Recently I finally purchased my own copy of Robert Kirk’s The Secret Commonwealth of Elves, Fauns and Fairies. The book, which I have discussed before, is really quite fascinating. Written in the 17th century but went, seemingly unpublished until the 19th century, the book lays out how and why humans might interact with the subterranean creatures often called elves or fairies. Kirk was a Presbyterian minister from Scotland and may have sought to ensure that peasants living in the remoter parts of Scotland were not unduly punished for occultism or witchcraft. After all, most of what they were doing was not bad and all of them seemed to have truly worshipped God (you can see more of Scottish folk beliefs and practices in Alexander Carmichael’s Carmina Gadelica from the early 20th century).

After having spent most of the book discussing how humans come to have the second sight and recounting things seen, Kirk discusses why it is that some humans have been given the second sight and why they sometimes seem to be able to tell things about the future. Kirk writes:

“Since the things seen by the seers are real entities, the presages and predictions found true, but a few endowed with this sight and those not of bad lives or addicted to malefic, the true solution of the phenomenon seems rather to be the courteous endeavours of our own fellow creatures in the invisible world to convince us (in opposition to Saduce’s, Socinians, and atheists) of a deity, of spirits, of a possible and harmless method of correspondence betwixt men and them even in this life, of their operation or our caution and warning, of the orders and degrees of angels, whereof one order of bodies of air condensed and curiously shaped may be next to man, superior to him in understanding yet unconfirmed, and of their region, habitation, and influences on man, greater than that of stars on inanimate bodies; a knowledge (belike) reserved for these last atheistic ages, wherein the profanity of men’s lives hath debauched and blinded their understanding as to Moses, Jesus, and the prophets (unless they get convictions from things formerly known) as from the regions of the dead.”

Now it is clear that Kirk contemplates the possibility that some of the elves are, in fact, an order of angels. But his angelology aside, here is what I find most interesting about Kirk’s statement here. The reason, he says, that some people are given the ability to communicate with elves and fairies is in order to overcome notions of what Paul Tyson calls a 1 dimensional metaphysic, wherein, what we can sense and observe directly (or scientifically) is all there really is. Belief in

fairies, Kirk tells us, helps us to understand that there “are more things in Heaven and Earth than are dreamt of in [our] philosophies.”

It is true that this won’t convince modern atheists. In fact, suggesting that fairies are real, might make them think we are mad. Some have even used arguments to suggest that they no more believe in God than they believe in fairies at the bottom of their garden. So wouldn’t Kirk’s argument fall on rather deaf ears? Perhaps, but that doesn’t make him wrong.

David Bentley Hart, whom I have cited on this subject many times, makes two arguments I think helpful to round out Kirk’s. The first comes in his essay, “God, Gods, and Fairies.” There, Hart notes that belief or disbelief in fairies is unrelated to belief or disbelief in God. This would seem to argue against Kirk. But there is an important distinction that must be made. What Hart means is that God and fairies are two qualitatively different. Fairies, if they exist, are discreet objects that exist within creation like trees or frogs or human beings. God, properly understood, is the ground of all being. So belief in either is unrelated if you mean they are the same kind of thing. However, they may very well be related in other ways. If there are creatures that exist, but do not conform to our normal understanding of things that exist, it might point us to the fact that there are thus other kinds out there, perhaps even a source of all kinds seen and unseen.

Hart notes in a different essay, “The Secret Commonwealth” that there is nothing inherently illogical about belief in fairies or other such things. Doing so, Hart reminds us, reminds us that the world is more than just a collection of atoms and quarks, more than just what we can sense or test in a laboratory. He writes:

“Finally, though, and perhaps a mite perversely, I want to urge the essential sanity of Kirk’s approach to reality. One need not believe in fairies to grasp that there is no good reason why one ought not to do so. To see the world as inhabited by these vital intelligences, or to believe that behind the outward forms of nature there might be an unperceived realm of intelligent order, is simply to respond rationally to one of the ways in which the world seems to address us, when we intuit simultaneously its rational frame and the depth of mystery it seems to hide from us. It may be that the apprehension of such an unseen order, when it comes in the form of folklore about fabulous beings, has been overlaid by numerous strata of illusion, but so what? Everything we know about reality comes to us with a certain alloy of illusion, not accidentally, but as an indispensable condition. Even the dreariest Kantian can tell you that our ability to know the world depends upon those transcendental qualities the mind impresses upon it before it can impress them upon the mind, and that all perception requires the supreme fictions of the synthetic a priori. At the most primordial level of consciousness, the discrimination between truth and fantasy if by truth, one means the strictly empirically verifiable becomes merely formal.”

Hart notes that whether one believes in fairies or not is inconsequential. What matters about Kirk’s view is twofold: First, it is not irrational, it is, as Hart says, a response, and a rational one, to how the world presents itself to us. And second, that there is certain to be some illusion, perhaps even delusion, involved in such a view as Kirk’s, but that his matters not. All of our interactions with reality require perception and interpretation. Sometimes that will mean getting some of the “facts” wrong but the truth right. 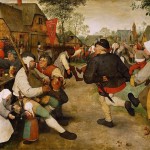 December 14, 2017
On Culture Wars and Culture Warriors: Wondering Which Way is Up
Next Post

December 30, 2017 On "Farewell Rewards and Fairies" by Richard Corbet
Recent Comments
0 | Leave a Comment
Browse Our Archives
get the latest from
Catholic
Sign up for our newsletter
POPULAR AT PATHEOS Catholic
1

Thanks For Giving Us More COVID,...
A Little Bit of Nothing
Related posts from Letters from the Edge of Elfland