Which Story Do You Live By?

As the one-year anniversary of my book publication approaches in January, I’m devoting Fridays from now until the end of the year to revisiting the book’s major themes. Each Friday, I’ll post an excerpt from No Easy Choice: A Story of Disability, Parenthood, and Suffering in an Age of Advanced Reproduction, with a question for reflection at the end. You’re invited to respond to the question in the comments. Given the emotional and important (if a bit contentious) conversation on the blog this week about how different people interpret their experience of living with various conditions—the different stories people tell about their lives—I decided to start at the end of the book, with a section on the role of story in reflecting on our lives. 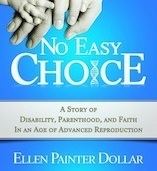 Were my husband and I right or wrong to pursue PGD [preimplantation genetic diagnosis, or pre-embryonic screening, to attempt to conceive a child who would not inherit the genetic bone disorder I have]? Were we right or wrong to abandon it? The short answer is that I don’t know. Our story is simply our story. Living that story, I broadened my understanding of disability, limitation, choice, suffering, and the legacies we leave our children, but I’ve been unable to reach a firm conclusion concerning whether reproductive technologies such as IVF and PGD are acceptable for Christians under some circumstances, and not under others. That’s why I won’t end this book by telling readers what to do, but rather by encouraging them to tackle important ethical questions with diligence, compassion, and wisdom.

An acquaintance whose daughter also has OI was once confronted by a brazen stranger who asked, “What’s wrong with her?” The mother’s response was “Nothing. Normal is just a setting on the washing machine.” It was a great answer, a true answer. Nothing is wrong, in a fundamental sense of our human identity as children of God, with those who have OI or other genetic disorders.

But something is wrong with our bodies. They are not as they were designed to be. While I do not advocate fixing what’s wrong at all costs—there are compelling, important reasons why Christians should tread carefully when considering IVF and PGD—I do think there are plenty of disabilities that need correcting, including mine. At the same time, I know that Leah and I, and the millions of other people living with genetic disorders, bring a multitude of gifts into the human family, some of which are valuable precisely because they were forged in the crucible of our pain and suffering.

My story of living with OI, raising a beloved child with OI, and making reproductive decisions in light of OI really encompasses several stories. In one story, OI is a basic brokenness in need of fixing. In another, OI is just one of many human limitations in need of acceptance. When Leah is in the emergency room with a new fracture—drugged and defeated, yet receiving skilled, compassionate treatment from doctors and nurses who have made sick children their life’s mission—I can believe the story about the miraculous ability of modern medicine to fix problems that used to be unfixable. Or I can believe the story about the pain that no amount of drugs or toys or soothing words can banish. In reality, I believe each of those stories at different times, and sometimes several at once. My perspective on reproductive technology is influenced by these conflicting stories.

In Yann Martel’s novel The Life of Pi, the main character describes the crucial role of the stories we tell to make sense of our lives. Pi, an Indian boy, is the only human survivor of a shipwreck. He ends up in a lifeboat with several zoo animals, including a Bengal tiger he names Richard Parker. When Pi is rescued and tells his story, his tale is met with unbelief. So he tells a different story, in which he was on the lifeboat with his mother, a cannibalistic cook, and a sailor, all of whom die in various gristly ways. The ultimate question of the book is, Which story do you believe? Both stories are frightening and full of death, but one—the one with the tiger—also tells of mystery, hope, and miracle. Early in the book, Pi writes:

I can well imagine an atheist’s last words: “White, white! L-L-Love! My God!”—and the deathbed leap of faith. Whereas the agnostic, if he stays true to his reasonable self, if he stays beholden to dry, yeastless factuality, might try to explain the warm light bathing him by saying, “Possibly a f-f-failing oxygenation of the b-b-brain,” and, to the very end, lack imagination and miss the better story.

For Christians, one story—about the life, death, and resurrection of Jesus Christ—prevails over all the hurts and joys that influence how we frame our life story on any given day. Being a Christian is about continually and consciously choosing to believe that hope, healing, and life conquer despair, brokenness, and death no matter what each day brings. Christian faith is ultimately an invitation to believe the better story, about a God who fixes what is broken, heals what is hurt, and brings what is dead to life. That is the story to which I cling and the story to which I turn when I’m trying to make sense of my childbearing decisions and the promise and peril of reproductive technologies. The Christian narrative does not provide an obvious answer to whether it’s ethically sound for believers to use IVF, PGD, or other assisted reproduction techniques. But it does provide a grounded, hopeful context in which to ponder essential questions about whether and how we will bear children as technology offers us ever-more-sophisticated techniques to do so. Infertility and family legacies of genetic disease inevitably cause substantial pain, but the Christian story invites us, even while we are mired in that pain, to believe in and cling to the extremity of love.

What are some of the fundamental stories you tell about your life? Do those stories fit together coherently, or sometimes exist in tension with each other, such as the conflicting stories I mention above in relation to life with OI? If you are a religious person, how does the Christian or some other narrative inform how you view your own story? (Or, if you want an easier question, have you read Life of Pi, how did you interpret the different stories in the book, and do you plan to see the film?)

November 19, 2012 Why I am Grateful to Be an Episcopalian: Part 1 - A Detour into Evangelicalism
Recent Comments
0 | Leave a Comment
Browse Our Archives
Follow Us!