Why I am Grateful to Be an Episcopalian: Part 2 – Adventures in Church Shopping

Why I am Grateful to Be an Episcopalian: Part 2 – Adventures in Church Shopping November 20, 2012 Ellen Painter Dollar

Read Part 1 of this series here.

My husband Daniel and I met at the Potter’s House Church in Washington, D.C., which was part of the Church of the Saviour movement. We worshipped on Wednesday evenings in a coffee house that the church also ran as a nonprofit business. The Potter’s House was the center of our social and spiritual life. We still count the friends we made there among our most intimate lifelong friends, the kind of people whom we see very rarely, but with whom we are able to pick up just where we left off. The Potter’s House took both social justice issues and a personal relationship with Jesus seriously—a surprisingly rare combination in a church.

But by the time we married, Daniel finished grad school, and we moved north to Connecticut for his first professional job, we were both burned out by the Potter’s House/Church of the Saviour model. In a small church with no clergy, there was not only a lot of work to do, but also a lot of conflict as we tried to work out a common vision for both our worshipping community and our coffee house business through consensus. If you wanted to see something done in our church, you absolutely had to do it yourself. This is not necessarily a bad thing: Aren’t we often exasperated by those people who are full of great ideas for what “we” should do, but who are rarely willing to step up and do it? But it’s also not terribly practical to expect church members to be intimately involved in every single activity from which they benefit. I was worn out by a church where I was constantly doing, with few chances to just sit back and be. I fantasized about finding a regular old mainline church—a church where I could open the bulletin on any given Sunday and be presented with a list of upcoming opportunities— special worship services, church school for kids, outreach—and then choose which I could help with and of which I could simply partake.

One Sunday shortly after our move to Connecticut, we went to a congregational church in downtown Hartford with a reputation for vibrant worship and extensive outreach programs. The sanctuary was packed. An usher, spying some space at the end of a pew, led us toward it, only to have the pew’s occupants shake their heads, “No, we’re saving these seats.” This happened two more times. Finally, we found empty seats that were not already spoken for. Our poor usher appeared mortified by his fellow parishioners’ kindergarten-level behavior.

The minister, who was fairly new at the time, gave a sermon that was almost entirely centered on the alarm system he had just had installed in his Hartford home. I’m sure there was a spiritual point to his story, but I don’t remember what it was. Daniel and I had just moved to Connecticut from the city that had been known earlier in the decade as the “murder capital” of the U.S. Both of us had our homes broken into—mine was burglarized while I and my housemates were at work, while Daniel scared his intruder away after he saw a hand reaching into a window one night. One of my colleagues was robbed at gunpoint in our office, and I had my wallet—full of Christmas shopping cash—stolen from my purse when I was attending a concert at the Potter’s House. The Potter’s House was located in a neighborhood that has since gentrified because of a new subway line, but at the time was a little dicey. While we didn’t live in that neighborhood, many of our friends did—and none of them had security systems. So the impression we got from this minister was, “I have just moved to the big, bad, scary city and I am so focused on my own safety that I am going to make my new security system the centerpiece of my sermon.” Was this a fair assessment on our part? Probably not. But hearing a personal-safety–themed sermon after being told in no uncertain terms where we were and were not allowed to sit did nothing to endear us to this church. The final nail in the coffin was toward the end of the service, when the minister started a round of “Let us break bread together” and motioned to the congregation to join in. Instead of singing, two women in front of us, a middle-aged mother and her grown daughter, rolled their eyes and then got the giggles. We never returned to that church.

We ultimately narrowed our choice down to two churches: An American Baptist church in the thriving center of our suburb, where we attended several dinners with other young married couples, and an Episcopal church in downtown Hartford (just around the corner from the congregational church where we had such a laughably bad experience) with a rich history of urban outreach. Which would it be—the more casual, suburban, young family vibe of the Baptist church, or the more liturgical, urban, less family-oriented vibe of the Episcopal church? 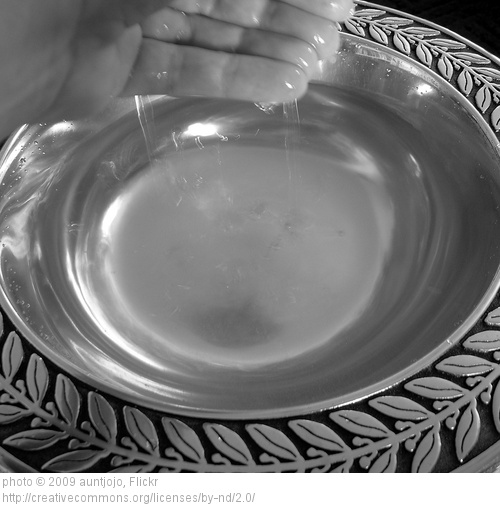 The choice became clear after we witnessed an infant dedication at the Baptist church one Sunday morning. The dedication was sweet, but it was a footnote in the service. The young parents and baby were on their own, with no visible support from godparents or extended family. The congregation’s focus seemed to be more on oohing and ahhing over the sweet babe than on committing the child to Christ. In contrast, for Episcopalians, baptism is a central act in a service, alongside the Eucharist. The parents, godparents, and congregation are asked to both support the child in specific ways (“Do you renounce Satan and all the spiritual forces of wickedness that rebel against God? I RENOUNCE THEM!”) and to recommit to their own baptismal vows. Hoping that babies would be part of our family story in the coming years, I wanted access to the defining, transforming sacrament of baptism rather than a sweet but less meaningful infant dedication.

In the spring of 1999, we joined that downtown Episcopal church, where we ultimately had three babies baptized, where the pastor sat with me and Daniel one winter night as we grieved our first baby’s diagnosis with the genetic bone disorder I passed on to her, where his wife gave me a copy of Martha Beck’s memoir Expecting Adam and thus planted the seed of an idea that I might one day write about the hard choices parents face around bearing babies with genetic disorders. About three years ago now, we transferred our membership to a different Episcopal church, because we wanted a more family-centric parish that would provide our kids with Christian education without our having to always be their teachers.

I now open the worship bulletin each week to read about dozens of opportunities for learning and service, only a few of which I am directly involved in managing. And in response to the many baptisms we host each year, when the pastor asks “Will you who witness these vows do all in your power to support this person in her life in Christ?” I answer with vigor, “We will!”

November 19, 2012
Why I am Grateful to Be an Episcopalian: Part 1 - A Detour into Evangelicalism
Next Post