Philip Seymour Hoffman’s Death Scares Me for a Different Reason

Some of the most moving written responses to actor Philip Seymour Hoffman’s death last week, apparently of a heroin overdose, have come from recovering addicts and alcoholics. As Seth Mnookin wrote for Slate, as countless people in recovery talked about in 12-step meetings nationwide, and as a friend whose husband is a recovering alcoholic testified: When someone with a successful career and a rich family life relapses and dies after more than 20 years of sobriety, it is terrifying for other addicts. Hoffman’s death scared me for a related, but different reason: In most accounts of Hoffman’s death, there was that one sentence, or even just a fragment of a sentence, describing how Hoffman started taking heroin again after first taking prescription pain medication. The same medication that I take every day, in doses that would leave most of you passed out cold or hospitalized or dead, directly led to Hoffman being discovered in his apartment with a needle in his arm.

I have written about the difficulties of being on prescription pain medication (for my severe arthritis) previously. There is stigma. There are ever-changing, ever-tightening rules and regulations, most of which I don’t find out about until I’m at the pharmacy being told I can’t get my prescription filled because of some rule I’ve never heard before. There is alternating shame and anger at having an unfixable condition ameliorated by good old-fashioned pharmaceuticals in a culture obsessed with fixing ourselves through “natural” remedies or the latest fad diet.

Hoffman’s death has brought many of these familiar feelings of shame and stigma back to the surface, along with a hefty dose of fear. It’s hard to see my medication regimen as part of a positive effort to help me function well when it is being named as a gateway drug to heroin addiction in article after article. (Because heroin is cheaper than prescription pills bought on the street, people who become hooked on prescription pills, often given for legitimate injuries, turn to heroin as a more affordable high.) It’s hard to swallow a pill or affix a patch to my upper arm without fear, inundated as we have been over the last two weeks with sobering information on how many people die of drug overdoses, many of them linked to prescription pain pills, in our country. (How many? A lot. In the U.S., more people die of drug overdoses in a year than in either car accidents or by gun violence. Who knew? I didn’t.)

To rein in my shame and fear, I remember facts. I have never had even a smidgen of an impulse to move from prescription drugs to heroin or anything else. I am laughably innocent when it comes to illicit drug use. I recently told my teenager that, unlike other parents, her dad and I don’t need to agonize about what to tell her about our own drug experimentation as teenagers, because neither one of us experimented. Ever. With anything. Many fatal overdoses involve prescription pain medications taken with either alcohol or other prescription drugs, such as sedatives or anti-anxiety meds. The only other medications I take are high-dose Vitamin D tablets and Advil, and I don’t drink at all anymore.

Most important, as the friend whose husband is a recovering alcoholic wrote to me, “An abusive chemical dependency is life-sucking. A healthy if terribly un-ideal chemical dependency is life-giving. As awful as it is that you need those meds, they empower you.” She was echoing a frequent test that doctors use to determine if opioid therapy is the right treatment for chronic pain: Does the patient function at a higher level when on medication, or at a lower level (lying around all day feeling sluggish and high)? I clearly function at a much higher level when I am well medicated.

So I’m back where I was before the Hoffman tragedy hit: Prone to questioning and shame and fear, but ultimately as certain as I can be that, right now, medication offers effective relief for my significant joint pain, which allows me to function at a very high level for someone with bone-on-bone arthritis, recent rib fractures, and more.

I am more and more convinced that truth is not something to be sought and then captured, defined, and set up on the mantle, unchanging, for us to gaze at. That’s not saying that everything is relative and that there is nothing absolute or eternal. But perhaps the only thing absolute and eternal is God. Even the other things we think of as absolute and eternal, like love and joy, can look quite different depending on who we are and what is happening in our life. Love can look like welcoming the prodigal son back with open arms, and it can look like allowing the rich young ruler to walk away in distress. Joy can look like a breakfast feast on the beach after Christ’s resurrection, and joy can look like a widow who gives the last coin she owns even though she doesn’t know where her breakfast will come from. 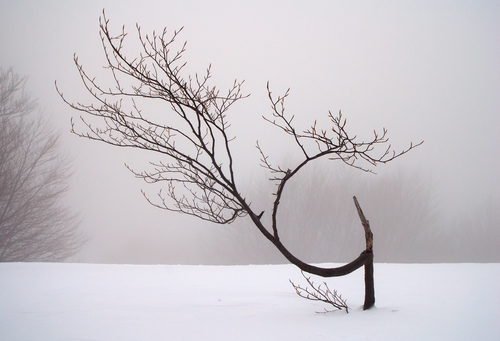 It is true that I take medications that are potentially dangerous and addictive. It is also true that those medications allow me to be a mother, a wife, a cook (well, not right now, but most of the time), a caretaker of a home, a writer, a dog walker, a swimmer—all in spite of joints more battered than the joints of most 80-year-olds. It is true that Philip Seymour Hoffman’s life was brilliant and beautiful, marked by remarkable talent, performances that revealed and enhanced the human condition, and the love of family and friends. It is also true that Philip Seymour Hoffman’s life was a tragedy, ruined by addiction. We hold such opposing truths in our minds side by side, turning them over, looking for what each tells us about what is essential and what is eternal, and also what keeps us sane and moving forward, what we need to get by. We learn that we are broken and whole and growing, all at once.

February 14, 2014 On Valentine's Day, Love (Not Romance) is What Matters
Recent Comments
0 | Leave a Comment
Browse Our Archives
get the latest from
Ellen Painter Dollar
Sign up for our newsletter
POPULAR AT PATHEOS Progressive Christian
1