In college, my favorite professor assigned Charles Sheldon’s 1896 classic In His Steps when we were covering the Social Gospel in an American religious history class. In His Steps is a novel about a minister in an East Coast town who, after being shamed by his own failure to respond compassionately to a jobless wanderer, enlists his congregation in an experiment. He challenges them to begin asking, before they make any decision, “What would Jesus do?”

At the time, I thought the premise was brilliant, the concept obvious, and wondered why no one had thought of it before. Isn’t the heart of the Christian faith the call to follow Jesus, after all? And doesn’t the question, “What would Jesus do?” invite us to do just that? 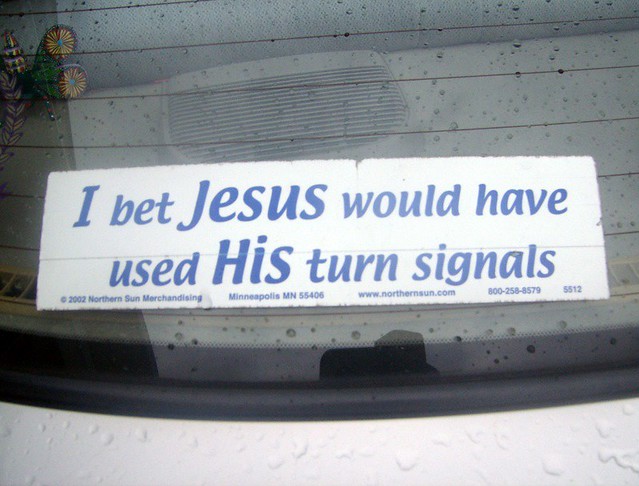 In the 1990s, evangelicals by the thousands began wearing simple bracelets also posing the question “What would Jesus do?”—abbreviated as “WWJD.” While I never wore a WWJD bracelet, in the same time period I worshipped at a church that voiced traditional Christian doctrine but, because of our very nontraditional practices (no church building, no clergy, a two-year process toward membership, required tithing, etc.), also attracted people disillusioned with traditional Christianity, sometimes including doctrine. For a number of my friends in that church, believing that Jesus was God incarnate was a stretch they couldn’t quite make. But they did believe that Jesus clearly modeled a more compassionate, just way of living that we ought to follow.The church was full of people—those who accepted Jesus as God incarnate and those who didn’t—doing works of mercy and justice in Jesus’s name.

Now and then, visitors to and members of the church went to extremes in this effort to ask “What would Jesus do?” and then do it. I recall a young visitor who explained that she had just moved to DC but had chosen not to find a room or apartment to rent. Because Jesus had “no place to lay his head,” she didn’t either. Each day she trusted that she would meet someone who would have a couch she could crash on, or a back porch where she could sleep out of the worst weather. Another regular visitor said that he was sure Jesus wouldn’t have paid for health insurance in solidarity with the millions of uninsured, so he lived without insurance too. When he discovered a serious health problem, he happened to meet a doctor willing to perform a needed surgery for free. A longtime church member once observed that Jesus, and the early Christians, seemed uninterested in luxuries of any kind, living only on basic necessities while giving away what they could and working on behalf of the poor and neglected. She mused that, if they were alive today, Jesus and the first disciples probably wouldn’t spend resources even on the most lovely of pleasures and luxuries—such as theater tickets or a celebratory dinner out—and wondered if we should also shun luxuries of every kind as well.

All of these people (and others proposing equally countercultural ways of doing as Jesus did) made me uncomfortable, partly because I felt ashamed that I wasn’t willing to do as they were doing. But my discomfort went beyond that. I noted that the young woman without a home and the man without health insurance relied on the charity of others to make their imitation of Jesus work. There’s nothing exactly wrong with that; Jesus and his disciples relied on others’ hospitality as well. But there was something skewed about the costs of these endeavors, given that the young woman and the uninsured man weren’t the only ones bearing them. That surgeon, for example, wasn’t getting compensated for her work. I wondered whether these endeavors both glamorized and misrepresented poverty; many people without homes or health insurance don’t have connections with others who could consistently provide them with a safe place to sleep, much less a free operation.

My friend’s theory about shunning even culturally and aesthetically valuable luxuries like concerts and plays was harder to question, but something about it still felt not quite right to me. Perhaps because music has often been a way for me to connect with God—its beauty lifts me out of myself or a song lyric leads to greater understanding of myself, others, and the world—I hesitated to declare concert tickets a luxury that Jesus would have shunned. It’s hard to say, of course, whether Jesus deliberately stayed away from concerts by the Capernaum Philharmonic or open mike nights at the temple coffeehouse, or whether his interactions with his culture’s art forms just didn’t make it into the Gospels. But if we believe, as Paul suggests, that we honor God whenever we think on what is lovely, excellent, admirable, or praiseworthy (Phillippians 4:8), might spending money to interact with art, whether going to a symphony or buying good books, be acceptable even in Jesus’s eyes?

I struggled for years in that church community feeling simultaneously out of my league (these people really loved Jesus!) and troubled by the straight lines drawn from what Jesus did/didn’t do to what I should do. When I finally realized the core source of my discomfort, it was so obvious that I couldn’t believe I hadn’t thought of it earlier.

There are several reasons that we can’t always get a clear answer to the question, “What would Jesus do?” including that we have access to only a few scenes from Jesus’s earthly life, and that Jesus himself wasn’t 100 percent consistent (e.g., at the wedding in Cana, he made more wine to lengthen the party, while at Martha and Mary’s house, he berated Mary for worrying about the food and drink; he interacted gently and graciously with many people, but not so with the Canaanite woman in Matthew 15). But the biggest reason that imitating Jesus doesn’t make sense as the core Christian value, the reason that made me wonder why I hadn’t thought of it before? I’m not Jesus (neither, by the way, are you). Not only am I not Jesus, I’m not a man. I don’t live in first century Palestine. I’m not able-bodied, as Jesus was. Unlike Jesus, I’m married and I have children. It struck me, suddenly, as ridiculous that I should strive to do what Jesus would have done.

Now, before you leave this page in disgust thinking that I’m just offering excuses for living a self-absorbed, consumerist lifestyle, let me clarify. I can’t strive to do what Jesus did, because I’m not Jesus, and our world isn’t Jesus’ world, and there’s so much we don’t know about what Jesus did or would do anyway. But we can strive to do as Jesus did. If we believe that Jesus, as God incarnate, was a unique revelation of God, we can learn a lot (not everything but a lot) about God by looking at Jesus.

By looking at Jesus, we learn that God cares about people on the margins, who are shunned from the powerful, elite cultural center of society—those who are poor, sick, old, young, or stigmatized for whatever reason. We learn that God doesn’t give much of a hoot about wielding worldly power. God doesn’t want to whip us all into shape and force us to do what God wants; God invites. God waits. God forgives. God waits some more. We learn that God cares about both our bodily welfare (Jesus was always both eating with people and healing them) and our souls (Jesus forgave sins). We can, and should, do as Jesus did by also caring about those on the margins, caring more about people than power, being patient and forgiving with one another, and caring about people’s bodily welfare as well as their souls.

To put it another way, I don’t think we’re called to imitate Jesus, but I do think we’re called to follow Jesus. There’s a subtle difference. Following Jesus implies an ongoing relationship, not merely imitating a really good guy who lived and died 2,000 years ago. Following Jesus implies that we might end up somewhere new doing things that are new—things that aren’t reflected in scripture because we inhabit a very different world than Jesus did. Even if we believe that Jesus was fully God, that doesn’t mean that Jesus’s life, death, and resurrection tell us all there is to know about God. God is still working, God exists beyond the limits of history (even Jesus’s history as a man), and God promises to do a new thing within us.

Following Jesus implies forward movement, striving for a destination, which we might call “the kingdom,” as Jesus did. And as you know if you’ve ever taken a leisurely Sunday road trip or cross-country adventure or European rail journey, there is far more than one way to travel to get to the same destination.

March 16, 2015
Finding Common Ground on Abortion: An Interview with Charles Camosy
Next Post