A dose of religion numbs pain 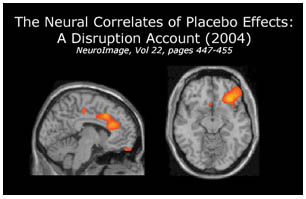 Paul Sims blogging over at New Humanist is pretty scathing about a new study which takes a look at the effect of religious belief on pain. The researchers zapped a dozen atheists and a dozen Catholics while asking them to look at an image of the Virgin Mary or a control image, and found that the Catholics felt less pain when reminded of their favourite demigod. The dial-a-quote Rt Rev Tom Wright, who can’t tell the difference between science and his arse, is delighted:

The findings were welcomed by the Anglican Bishop of Durham, the Rt Rev Tom Wright who said: ‘The practice of faith should, and in many cases does, alter the person you are. ‘It can affect the patterns of your brain and your emotions. So it comes as no surprise to me that this experiment has reached such conclusions.’

But this conclusion isn’t news. In fact, it’s already well-known that religious fervour can dull your pain. Never mind the scientific studies (of which there are plenty), you only need watch Shi-ites whipping themselves during Ashura, or Filipinos nailing themselves to crosses for Easter, to know that.

What this study is actually about is rather more interesting, because it uses brain scans to look at which parts of the brain are responsible for the effect. It turns out that the right ventrolateral prefrontal cortex (RVLPFC) – shown in the little graphic above – is the bit that lights up in the Catholics who felt less pain as a result of their Madonna-induced rapture. Because the RVLPFC is known to play a role in the reassessment of the emotional evaluation of experiences, the researchers propose that the religious state leads to a reassessment of the pain, giving it new more positive meaning and so making it less, well, painful.

No doubt that’s true. But before any religious believers, like the Right Reverend Wright, get too excited about the wonders of religious belief, it should be pointed out that the RVLPFC is in fact the bit of the brain that drives your response to any kind of placebo – including, for example, your common-or-garden sugar pills. Back in 2004, Lieberman et al showed that a sham medical procedure (not a sugar pill in this case but a non-inflated rectal balloon) reduced the pain felt by sufferers of irritable bowel syndrome by activating the RVLPFC. They commented:

These results suggest that placebos may operate, in part, by increasing thoughts about the affective aspects of the pain (i.e., ‘‘I believe I am going to be less bothered by pain now’’) associated with increased activity in RVLPFC.

In other words, as far as pain relief goes, you can substitute the mystery of the trinity with a good old-fashioned sugar pill and some kind words from the GP. They work the same way.

October 2, 2008 "Religion first!", squeal Catholic doctors
Recent Comments
0 | Leave a Comment
Browse Our Archives
get the latest from
Nonreligious
Sign up for our newsletter
POPULAR AT PATHEOS Nonreligious
1