Justin Barrett is a Senior Researcher at the University of Oxford’s Centre for Anthropology and Mind and a lecturer in the Institute of Cognitive and Evolutionary Anthropology. He’s also a devout Christian who believes that we have an inbuilt predisposition to believe not just in superstitious stuff, but also in a monotheistic god. And he takes this as evidence that god is real, and not invented. 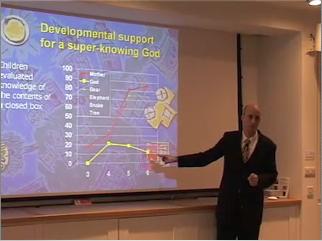 Back in November, he gave a talk at the Faraday Institute for Science and Religion in Cambridge in which he said a few things (such as: “You have to indoctrinate someone into being an atheist”) that got AC Grayling’s blood boiling (Grayling is a Professor of Philosophy at the University of London). Here’s what Grayling had to say about it:

Barrett and friends infer from the first half of these unexceptionable facts that children are hardwired to believe in a supreme being. Not only does this ignore the evidence from developmental psychology about the second stage of cognitive maturation, but is in itself a very big – and obviously hopeful – jump indeed. Moreover it ignores the fact that large tracts of humankind (the Chinese for a numerous example) have no beliefs in a supreme being, innate or learned, and that most primitive religion is animistic

Had Grayling attended the seminar as Brown did (or read my book, Why Would Anyone Believe in God?), he would know that I do not say that religion is “hardwired” or “innate” – rather that children have propensities to believe in gods because of how their minds naturally work.

Well, luckily a video of the talk is archived at the Faraday Institute, (listed under Brain/Psychology). So we can see for ourselves what all the fuss is about.

The first 20 minutes or so is stuff we’ve heard before from the likes of Scott Atran and Pascal Boyer – children seem to be programmed to see intention and design, rather than happenstance and random chance. Of course, this is true of adults too. Humans in general tend to err on the side of seeing patterns where there are none. But it’s especially true of young children.

The more interesting bit starts at around 21 minutes, when Barrett starts discussing his own work on infant understanding of the mental states of other people.

What he shows is that 3-year-olds think that their parents have god like omniscience – they know everything that the child knows. And when you ask them about god, they think the same. It’s not till kids reach 5 years that they understand that their parents do not know what’s going on inside their own head, and that there are things that only they know.

But, when you ask 5 year olds about god, well, they still think that god knows everything (as do adult believers, of course). Barrett takes this as evidence that kids come with a ‘correct’ knowledge of god built in. Young kids get god right, and mum wrong, and he says of 5 year olds: “They are not dumbing down god, they are smarting up mom” (30 minutes).

Now these facts are indisputable. It’s the interpretation that’s open to question. As Barrett says in the Q&A; session: “What we do with the interpretation, depending on our worldview, is a completely different issue. But at least we can agree on what the science is starting to show.”

So whose interpretation is right? Is Barrett right that belief in an omniscient god is built in, and we have to be persuaded otherwise? Or is Grayling right that very young kids just aren’t smart enough to figure out how minds work. And that when they learn that others can’t actually read their mind, then they would extrapolate that to god too if it weren’t for cultural indoctrination?

My money is on Grayling. I think it’s pretty clear what’s happening here. Young kids, like animals such as monkeys, simply don’t have a theory of mind. They think that others know what’s in their head, and of course when they are told about this invisible person called ‘God’ they extend these misconceptions to it.

As kids grow up they figure out that the people around them do not, in fact, know what’s going on inside their heads. They have plenty of evidence from observing how people behave, and employ their increasing brain power to work out the truth.

Of course, they can’t do this for God, because God is a fictional entity. All they have to go on is what adults are telling them. And so, following the lead of the adults around them, they continue to accept that God is omniscient. Many kids have similar beliefs about Santa Claus, and for the same reason.

Barrett says that young kids ‘get god right’. But the only reason they do this is that god is an extension into the adult world of childish understanding of how the world works. This isn’t too surprising, of course. The Judaeo-Christian concept of god is a unabashed imaginary father figure. Adults attribute to it the superhuman powers they once believed that their own fathers had.

But what Barrett wants to know is “Why did these beliefs and not others?”. So, is there any evidence that these beliefs are what you get if you start to degrade the adult brain’s ability to reason about the world? Well yes there is.

Tania Lombrozo, Professor of Psychology at the Concepts and Cognition lab at Berkeley, has done similar experiments to those described by Barrett, but in Alzheimer’s patients rather than young kids. And it turns out that, just like kids, Alzheimer’s patients tend to see design everywhere. This is an excerpt from an article on her work in Berkeley Science Review:

Unlike children, most educated adults know that clouds form because water condenses, and that mountains exist because of plate tectonics. However, Lombrozo was interested in whether adults would fall back on teleological reasoning in the absence of background knowledge. To address this question, she and her colleagues Deborah Kelemen and Deborah Zaitchik examined a group of adults whose background beliefs were compromised, but who had otherwise developed normally: Alzheimer’s patients.

“Alzheimer’s patients have some characteristics of adults and some characteristics of children,” says Lombrozo. “Like adults, they have undergone normal development and have presumably gotten rid of any reasoning strategies associated only with children. But like pre-school children, they might not have access to the kinds of rich causal beliefs that adults typically have access to.”
In her study, subjects were asked to identify the most appropriate answers to a series of “why” questions. For example, for the question “Why does the earth have trees?” they could choose between “because they grow from tree seeds,” or “so that animals can have shade.” Lombrozo found that like young children, Alzheimer’s patients were much more likely than age-matched control subjects to prefer teleological explanations, picking the teleological choice about twice as often as their healthy counterparts.

So kids are like adults but with an important bit of their brain missing. And that’s why they ‘get god right’!

MLMs' Future: LuLaRoe and Its Pyramid...
Roll to Disbelieve
Related posts from Epiphenom

Christian clown Mike Lindell to launch 'TwitTube' social...
AFTER  being banned by Twitter last month MyPillow CEO Mike Lindell got...
view all Nonreligious blogs
What Are Your Thoughts?leave a comment
Copyright 2008-2021, Patheos. All rights reserved.
error: Content is protected !!